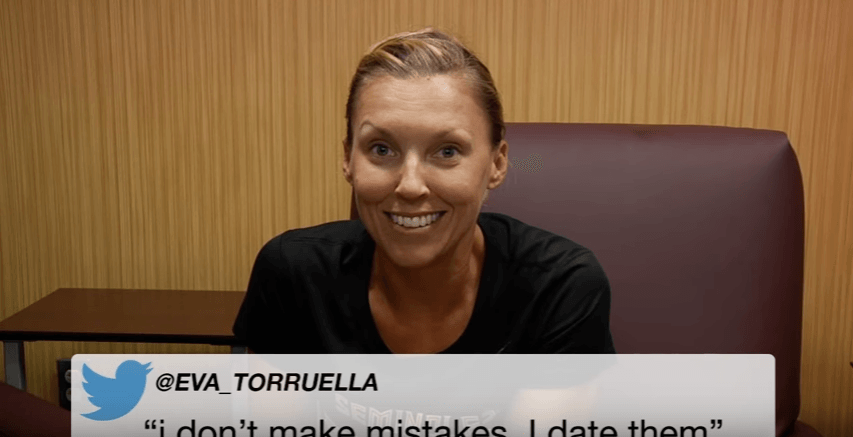 That awkward moment when your coaches read your Tweets and put them on YouTube, Current Photo via Florida State Athletics

Some coaches are good at social media. Some are not.

But what coaches are really, really good at is being unimpressed with their athletes’ social media posts.

And that’s just what Florida State’s Athletics Department has made happen, and filmed, and put on the internet for all of us to enjoy.

First, at about the :50 mark of the video, indoor coach Poole reads a Tweet from redshirt sophomore Christina Ambrose, who is trying to hide her tattoos from her “conservative grandma.” Coach Poole laments about his athletes’ priorities, though we will point out that Wright was named to the ACC Academic Honor Roll last year, and is averaging a career-high 2.17 kills/set this season while starting 18 out of Florida State’s 19 games.

At the 3:10 mark, coach Niles reads a Tweet from Tory Paranagua, who claims to have “brought the brazilian curse,” to which coach Niles wonders if that was Zika related – the Tweet was sent out on January 1, 2015, which is shortly after the late-2014 hypothesized arrival of the virus in Brazil.

At the 4:45 mark, coach Niles makes another appearance reading a Tweet from Eva Torruella that reads “I don’t make mistakes, I date them,” to which coach Niles looks at the camera and mentions that she and Eva are “going to have to have a conversation about that. Toruella, a member of the Puerto Rican National Team, red-shirted her freshman season last year and is not currently listed on the Seminoles’ roster ahead of the 2017 spring season.

"i dont make mistakes, I date them"

While many of these Tweets and responses are good, the winner of this video is women’s basketball head coach Sue Semrau. Coach reads a Tweet from Shakayla Thomas that says “I always say I’m gone go shoot. But end up watching TV,” and responds “that’s why we haven’t won a National Championship yet.”