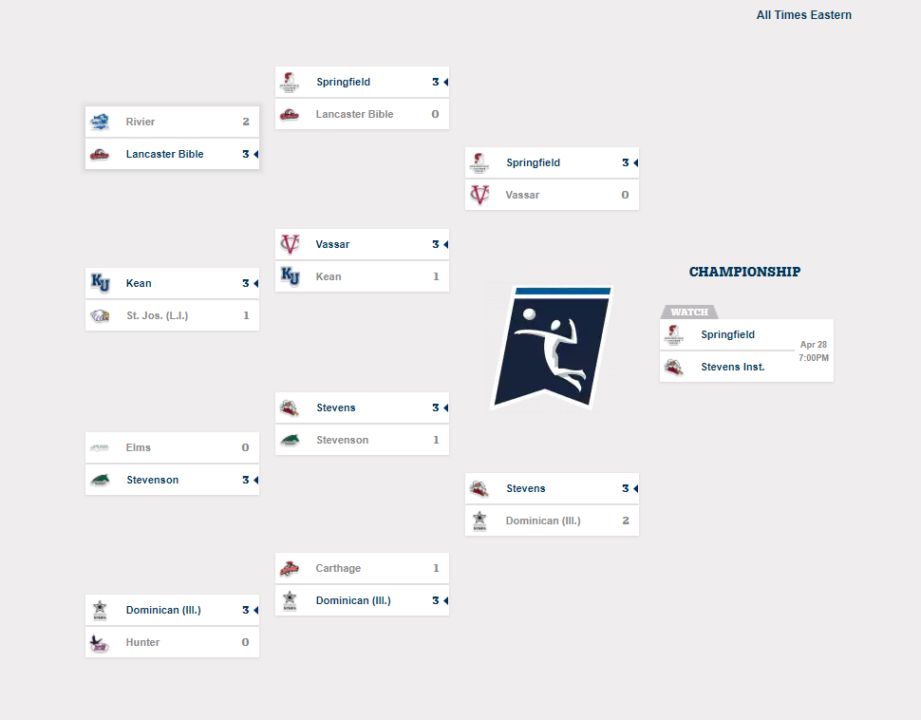 It was a tale of two semi-finals on Friday evening in Kenosha, Wisconsin at the 2018 Division III championships. In... Current

It was a tale of two semi-finals on Friday evening in Kenosha, Wisconsin at the 2018 Division III championships. In the first, Springfield College made quick work of Vassar College in 3 sets, playing just 148 points among 10 players. In the second, Stevens and Dominican battled to a 5-setter, before Stevens blew through the deciding set. They used 15 players in 235 total points.

This sets up a final match between the defending champions Springfield College and the Stevens Institute of Technology. The game will be a rematch of the 2015 championship, where Stevens swept Springfield 3-0.

In spite of that history, this Springfield team is much better than that one was, and they should enter as the favorites – having not lost a match to a Division III team yet this year. The two teams haven’t yet played this year, so this should be a fresh match for both sides.

The last time the two teams faced was in the 2017 national semi-finals, where Springfield swept Stevens 3-0 (in Springfield). This Stevens team is better than that one was, having posted a higher hitting percentage (.328 vs. .304), and more blocks-per-set (2.42 vs. 2.35), though their opponents are hitting slightly better (.169 vs. .164) than they did last year.

Stevens had moments of brilliance on Friday night against Dominican, but they also had moments where they struggled to capitalize on opportunities – including losing a set where they out-hit Dominican .320 to .036.

This might seem like a slam-dunk match for Springfield, but we have to remember that Stevens had an incredible 4 First-Team All-Americans this season (Thomas Burrell, David Lehman, Jacob Patterson, Gabe Shankeweiler), along with a 5th on the Second-Team.

Stevens’ middles, Cooper Diamond and Burrell, played to their peak potential on Friday. To pull off the upset, Stevens would need a more efficient night from DeBoer and Shankewiler. They also need All-American opposite David Lehman to do better than his 4 kills, 4 dig performance from Friday.