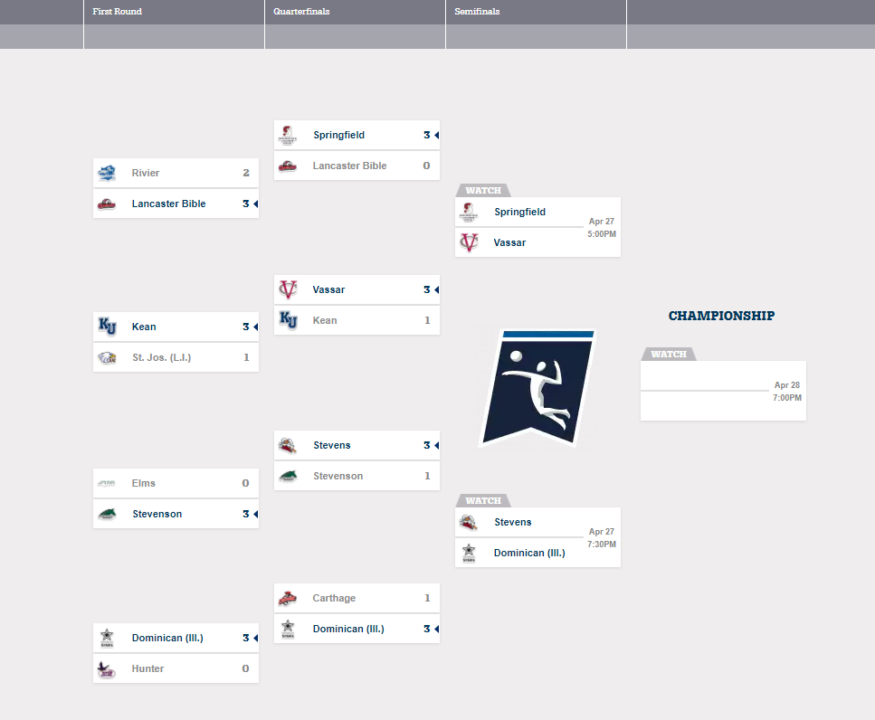 Friday night in Kenosha, Wisconsin will play host to the semi-finals of the 2018 Men’s NCAA Volleyball National Championship tournament,... Current

Friday night in Kenosha, Wisconsin will play host to the semi-finals of the 2018 Men’s NCAA Volleyball National Championship tournament, where 4 teams will play for the right to advance to Saturday’s national championship match.

In the early match, defending champions Springfield College will play Vassar College at 4PM Central Time. Springfield, the defending champions, feature a perfect 27-0 record against D3 opponents this year, the nation’s most efficient offense at .373, the national player of the year Sergio Velez, and the national coach of the year Charlie Sullivan. Vassar College is 23-7 this year, but were swept by Springfield College in their two matchups this season.

Details for Springfield vs. Vassar

In the late matchup, Stevens Institute of Technology and Dominican University will play at 7:30 Eastern. Dominican arrived at the championship semi-finals the hard way – by having to play one more match than the other 3 teams here, and by beating final 4 host Carthage College in the semi-finals. They’ll face off against Stevens, who knocked Dominican out of last year’s championship tournament in the quarterfinal 3-1. Dominican is 26-7 this year, while Stevens is 26-4. Stevens has been very good against top opponents this year – in the UVC conference championship tournament, they beat #4 NYU 3-2 and swept #2 Vassar College 3-0. They are 9-2 against Division III ranked opponents this year (they even stole a set against D1 ranked team USC early in the season), whereas Dominican is just 6-5 against ranked opponents.

Details for Stevens vs. Dominican