Western Kentucky Looks to Get Back on Track vs. UTEP, UTSA 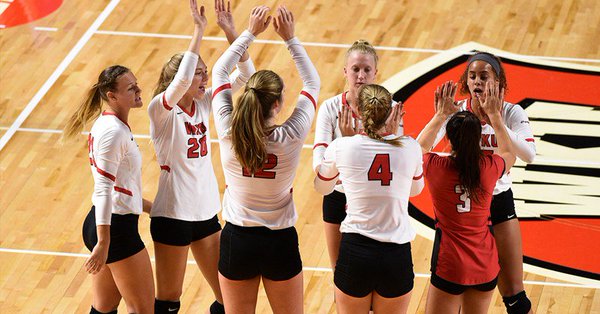 WKU Volleyball is headed to Texas with a full slate on deck for the weekend. The Lady Toppers will open the road trip in El Paso at UTEP Friday evening before closing the swing out at UTSA on Sunday. Current Photo via Western Kentucky Athletics

BOWLING GREEN, Ky. – WKU Volleyball is headed to Texas with a full slate on deck for the weekend. The Lady Toppers will open the road trip in El Paso at UTEP Friday evening before closing the swing out at UTSA on Sunday.

LOOKING AT THE MINERS:

UTEP enters Friday’s contest with a 4-17 reading on the season which includes a 1-8 mark in Conference USA matches. Last time out, the Miners fell to Middle Tennessee in three sets from Murfreesboro.

WKU and UTEP have a few common opponents on the season – all league opposition – including Rice, Southern Miss, UAB, Marshall and MTSU. The Miners’ lone C-USA victory was last Friday at Louisiana Tech.

UTEP returns nine of 11 letterwinners in addition to returning a majority of its starters from last season’s 6-22 squad.

The Lady Toppers lead the all-time series with UTEP 7-0 with the most recent meeting taking place in the 2017 regular season in Bowling Green.

Winners of nine of their last 10 matches, UTSA is one of the hottest teams in the league right now and sits in second place in the standings. The Roadrunners are 8-1 in C-USA action and own a 16-5 overall mark on the season.

Common opponents between WKU and UTSA are all league opposition. Both sides have faced Southern Miss, North Texas, Rice, UTEP, UAB, Charlotte and Marshall. UTSA will host first-place Rice on Friday before the Lady Toppers stop in.

The Roadrunners return 11-of-15 letterwinners from last year’s 12-16 campaign including three starters plus their libero.

WKU leads the all-time series with UTSA by a 5-1 reading. The last time the sides met was the 2017 regular season on The Hill when WKU came away with a 3-0 victory.

Following the Lady Toppers’ lone trip to the Lone Star State, WKU will return home for its final homestand with FIU and Florida Atlantic coming to The Hill.