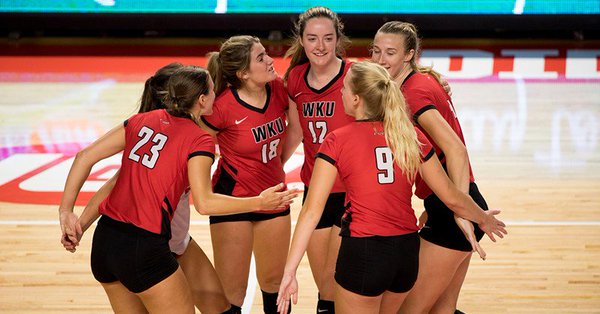 After playing its last nine matches at home, WKU Volleyball hits the road with a Thursday night tilt at Southern Miss on the schedule.  Current Photo via Western Kentucky Athletics

BOWLING GREEN, Ky. – After playing its last nine matches at home, WKU Volleyball hits the road with a Thursday night tilt at Southern Miss on the schedule. The Lady Toppers enter the contest with an 11-5 overall record and a 2-0 reading in Conference USA action. The Golden Eagles own a 7-8 record (1-1 C-USA) heading into the matchup.

LOOKING AT THE GOLDEN EAGLES

WKU and Southern Miss have faced one common opponent in 2018 as both sides dropped three-set decisions to Alabama.

Over the weekend, Southern Miss headed west for its UTSA-UTEP road trip. The Golden Eagles fell in four sets in San Antonio before winning in four from El Paso.

USM is 3-0 in home matches at Reed Green Coliseum this season after hosting an opening-weekend tournament. The Golden Eagles have played their last 12 contests away from Hattiesburg. The Golden Eagles returned 15-of-17 letterwinners from a 20-12 campaign a year ago while also bringing back six starters and losing just their libero.

In the all-time series between WKU and Southern Miss, the Lady Toppers own a 5-1 advantage. The Red and White have won the last five meetings between the sides dating back to the 2014 campaign.

Following Thursday night’s tilt in Mississippi, WKU Volleyball will return to The Hill to host Rice on Sunday. The noon CT tilt will feature the top two teams from the Conference USA Preseason Coaches Poll.