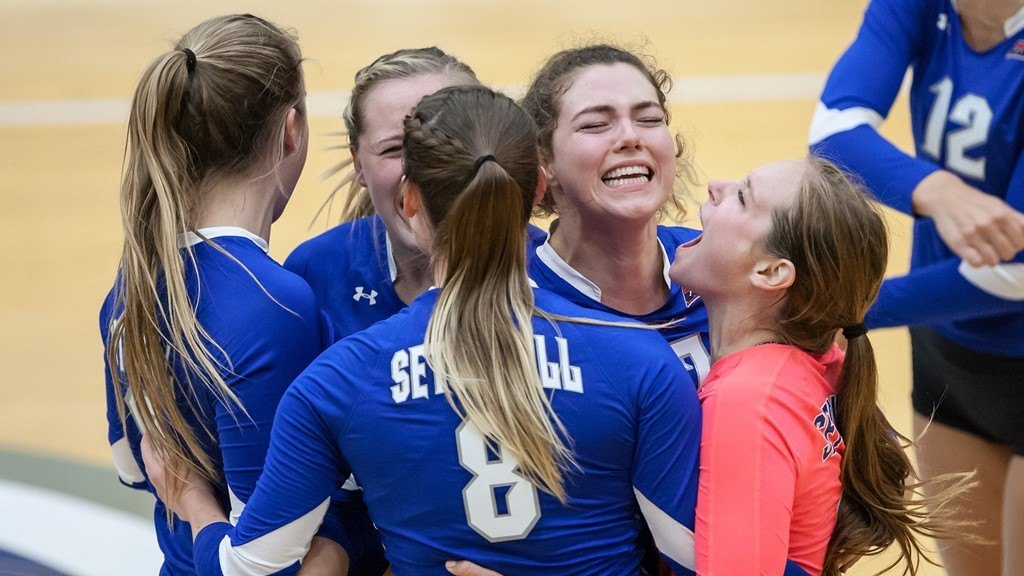 James Gilliland is a USA Volleyball Referee and Volleyball “Dad” in Dallas, Texas. Below, he shares his journey from novice... Stock Photo via Seton Hall Athletics

James Gilliland is a USA Volleyball Referee and Volleyball “Dad” in Dallas, Texas. Below, he shares his journey from novice volleyball parent to the team’s resident ‘crazy uncle,’ a journey that many families take on the long, wild journey that is this sport.

The opinions and views expressed in this article belong to their author and do not necessarily represent the views of VolleyMob. We welcome submissions, and if they’re interesting, we might just run them! If you have something to share about volleyball, please send it to [email protected]

In 2003, I moved my family from the far west of Lubbock TX to Dallas. My wife and I have a special needs child, Ashton, and we sought a bigger metro area to get him the care he needed. Madison, our daughter, was a small little baby who had just turned one year old. The decision we made after having Madison to move to Dallas was a hard one. We were unsure of Aston diagnosis and we didn’t know if having another boy would yield the same result. Cullen, our oldest, was thriving, healthy and Madison was growing fast, even at just over a year she looked like an athlete. So, we were set, Madison would not be having a sister.

We had Maddy playing a few different sports, she liked basketball, softball and volleyball. My wife and I were college athletes – me playing basketball and my wife golf.  Volleyball however, is what she most gravitated to and loved the most. After a brief stint with the YMCA, we joined our first club. We had no idea what to expect. I had played some AAU when I was young, but nothing like this. Madison was reserved and quiet. Frankly, our first year was a mess. None of the girls seem to get along and we had some parents that were positioning for volleyball stardom and immortality, apparently. We made the decision to switch to the club we were at now. Again, we had no idea what to expect since it was a club with a greater reputation and a higher expectation. Maddy made the third-line team and we were so happy for her. We learned that not all parents are volleyball psychopaths. Even to this day we’re still great friends with most of the parents from our club’s previous teams. Dr. J and his wife are special people with a special needs child of their own and twin girls. His daughter, who is herself in love with volleyball, is doing great and without his help I believe Madison would stay jacked up all the time with this relentless training.

Just like family, when things are going great, things are great, then something happens to send that greatness going in the wrong direction again. Maddy was brought up to the first line team for Nationals since the 12s coach wanted another middle for the tourney. The team had won ten straight with two golden balls and double qualified, ranked first in the nation for 12 Open. The girls however, didn’t want Maddy there. Why would they? Things were good and they had spent the whole year with each other. Maddy persevered and the coaches’ insight, although maybe Pygmalion, you could say, did come to fruition. The first day of the tourney came and the starting middle was no were to be found. The backup had also just spent the last four weeks with a virus that kept her out and was just now getting back into form. The team ended up not finishing first and we had no idea where things were going to go. We had a ton of unanswered questions. Summer league helped Maddy get to know the girls more, but also she was growing stronger, faster, taller, and more confident. 13s came with its own challenges, new girls to the team, puberty for some and not others, are a huge coaching challenge. We now had cliques on the team, a group within a group, and the cliques themselves had their own name. Good gosh it was awful, and Madison was very upset about the issue and really from the start it bothered her. However, it also caused her to bond with some girls who were themselves not part of the clique.

The last two years have been awesome. The girls are a little more mature and getting to be comfortable with their own skin. This past year has been great. Maddy comes up to me one day and says that this year she “can finally be herself.” I see her laughing and showing real friendship and affection to her teammates. They play for each other and take up for each other. An Instagram post had one of our girls going to bat for one of her teammates and the team seemed to rally around her. The girl doing the heavy lifting was a newcomer and I think this was important to help that last piece gel. The girls have started having a private moment of prayer without anyone suggesting or mandating it which makes me so proud. Having been as high as three and as low as 15 in 15 open this year, we have certainly had ups and downs, but the girls refuse to blame each other. We have what the girls have deemed as “Dad Chat” (our group txt name). It has mostly been dads this year at all the out of town Qualifiers. We have spent most of the time with each other now that the girls are older and share a room instead of rooming with parents at tourneys. We scour the countryside looking for the best Triple D joints and local micro brews. We live stream all the games on Facebook complete with play by play (Paul Sunderland I am not) and color commentary, including the previous night’s restaurant reviews.

So, every time we have a practice, or an out of town qualifier, it’s like the ‘cousins” getting together. If there ever was a family, we have it now. Among the group we have the responsible philosopher, Mr. Intensity, the long-lost Yankee who busts everyone’s chops, the jock, and of course yours truly the “Crazy Uncle.” The dads have bonded together and it makes going to volleyball practice that much better. The girls have gotten so close with one another that paying those high dues to the club itself is a little less painful because my daughter is getting so much out of it. The Dads are of course are totally obsessed and a little out of control just like any family reunion. Don’t let anybody fool you, we’re close, but everyone has their daughter’s interest first, I get that, there is however something a little more going on here. My wife’s and I decision not to have any more children did rob my daughter of a sister, but every time they’re on the court, and even more so when they are just hanging out together, they are sisters. I could not be more humbled and grateful for these people and I would stop work and go help in a moment’s notice if anyone on our team needed me. It has been a special year and I hope the girls do well at nationals, however, first or last the family will give each other a great big hug and get ready for our next family reunion.