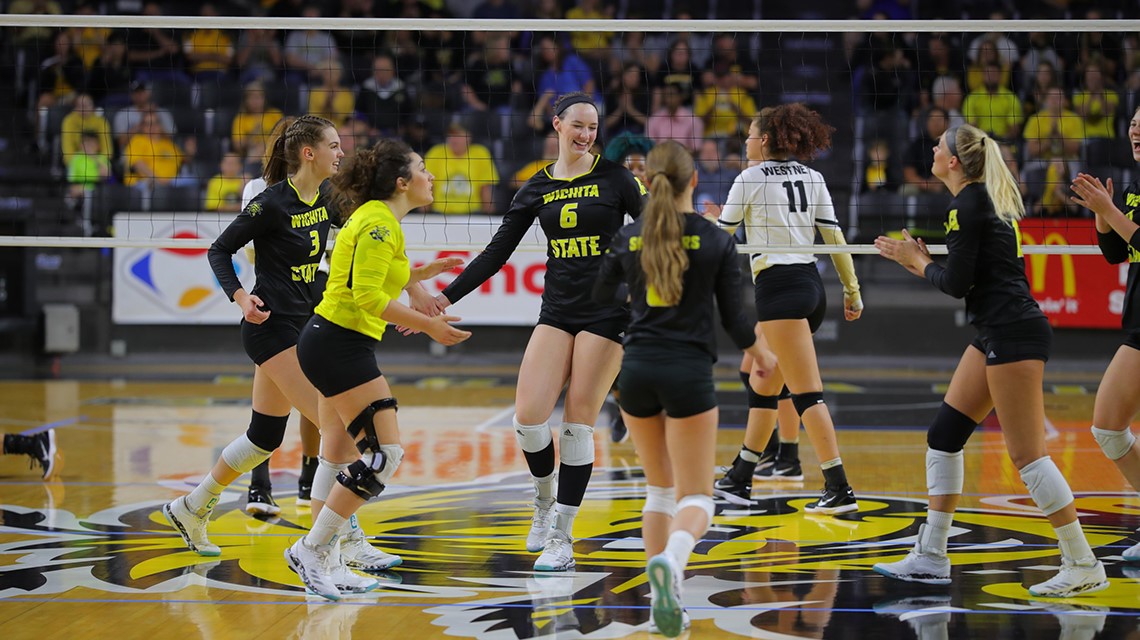 It was a close race to the top in the 2018 American Athletic Conference Volleyball Preseason Coaches’ Poll, as reigning conference champion Wichita State was chosen as the favorite for a second-straight year. Meanwhile, Cincinnati right side/outside Jordan Thompson was tabbed as Preseason Player of the Year.  Current Photo via Wichita State Athletics

PROVIDENCE, R.I. – It was a close race to the top in the 2018 American Athletic Conference Volleyball Preseason Coaches’ Poll, as reigning conference champion Wichita State was chosen as the favorite for a second-straight year.

Cincinnati’s Jordan Thompson was named Preseason Player of the Year for the third-consecutive season.

The Shockers enter their second year in The American on the heels of a 29-4 season that included a 20-0 mark in conference play, earning their 11th trip to the NCAA tournament. They set the conference’s record, winning 32-straight sets from October 27 through December 1. Wichita State used an explosive offense, leading the conference with 14.70 kills, 13.81 assists and 2.60 blocks per set, averaging a league-high .301 hitting percentage, while holding its foes to hitting a league-low .150—both of which are conference records. All-America outside hitter Tabitha Brown was a unanimous preseason all-conference selection, while libero Giorgia Civita joined her on the preseason team.

Temple enters 2018 coming off a second-place finish in last year’s American standings. The Owls went 20-10 overall and 15-5 in league play, securing their fourth-straight 20-win season. Temple traveled to Morgantown, W.Va., for its first postseason appearance in 15 seasons, sweeping Campbell in the first round of the NIVC before falling to West Virginia. Temple finished second in the league in hitting percentage (.247), assists (12.88), kills (13.68) and blocks (2.41).

SMU shared second place with Temple in 2017 after going 21-11, and earned a third-consecutive postseason bid. The two-time American champion Mustangs have tallied at least 20 wins in five straight seasons after ending last year’s slate in NIVC action against Texas Tech. SMU led the conference with 17.93 digs per set, which ranks second in conference history. The 2016 conference Freshman of the Year Kendall Patterson and 2017 second team all-conference outside hitter Brittany Adams earned spots on the preseason all-conference team.

UCF finished fifth in the 2017 conference standings and was one of three league teams to earn a trip to the NIVC. The Knights won their final six conference matches and finished the year with a 20-14 overall record. UCF led the league with 298 blocks, which rank third all-time.

Tulsa finished four points behind UCF with 74 to take sixth place. The Golden Hurricane returns big numbers to both rows. Libero of the Year Taylor Horsfall broke the league record with 755 digs in 2017 and was placed on the preseason team. Outside hitter Emily Thorson knocked down 525 kills and averaged 4.20 kills per set to lead the conference and join Horsfall on the preseason team.

ECU followed in seventh place with 68 points. The Pirates finished fourth in the 2017 standings with a 13-7 conference record. Setter Shelby Martin was named Freshman of the Year and earned a spot on the preseason all-conference team.