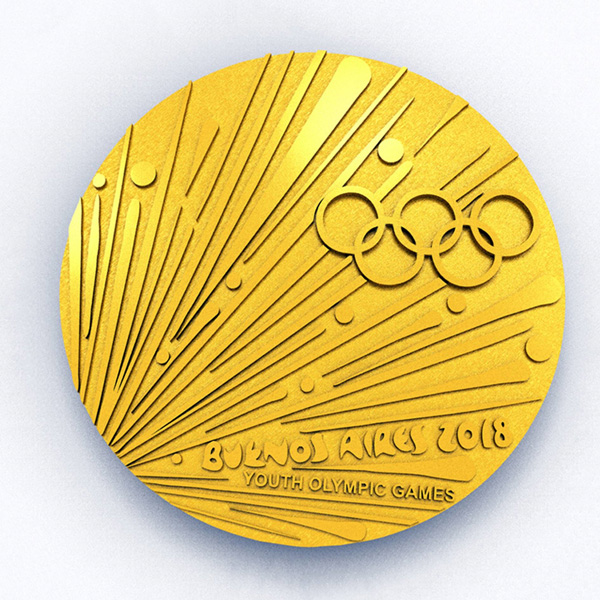 The winning entry of the International Olympic Committee (IOC)'s Medal Design Competition for the Youth Olympic Games Buenos Aires 2018 has been chosen. Current Photo via IOC

The winning entry of the International Olympic Committee (IOC)’s Medal Design Competition for the Youth Olympic Games Buenos Aires 2018 has been chosen. It was submitted by 18-year-old Muhamad Farid Husen from Indonesia, and is entitled “Fireworks of Victory“.

Chosen from close to 300 entries from over 50 nations, from Algeria to Venezuela, the winning design was picked by a panel of judges made up of Young Change-Makers, Young Reporters and IOC Members.

Medal Design Competition winner Muhamad Farid Husen commented on his win: “It is really an honour for me to be a little part of Youth Olympic Games. I can’t describe how my feeling is…being the designer of the medals which is used by all the winners of the Youth Olympics is an honour for me. My dream came true.”

He said of his design: “This medal was inspired by fireworks. Fireworks representing the excitement and the glory of the Youth Olympic Games where all nations come together as one to participate and celebrate. Fireworks fly to the sky, giving the reflection of how the young athletes are reaching their dreams.”

IOC Member and Olympian, judge Aya Medany commented: “Muhamad’s design really touched my heart as an athlete. The most important thing is to celebrate after winning, and it’s nothing better than to celebrate with fireworks. It’s also amazing to have the winner the same age as the participants in the YOG.”

Competition judge and Young Change-Maker, Emily A. Yeh said: “The winning design gives an energetic feel with unlimited possibilities, which is also what we hope to see from the YOG athletes and the young generation.”

Fellow judge and Young Change-Maker, Nina Balaban said: “This has been an amazing project. [It is] empowering the young artists to spread their wings and learn more about the Olympic values.”

Winner Muhamad, the youngest-ever entrant to win the competition since the first edition in 2010, will attend the Youth Olympic Games Buenos Aires 2018, including the Opening Ceremony, and witness first-hand athletes being awarded medals featuring his design. In addition, he will receive his own set of medals and a Samsung tablet.

The judges also selected two runner-up designs. In second place was “Making Waves” by Patrick Nair, 20, from the USA; and in third place “Victory Road” by 28-year-old Damien Perrin from Switzerland.

For more information on the Youth Olympic Games and opportunities to get involved go to www.buenosaires2018.com.