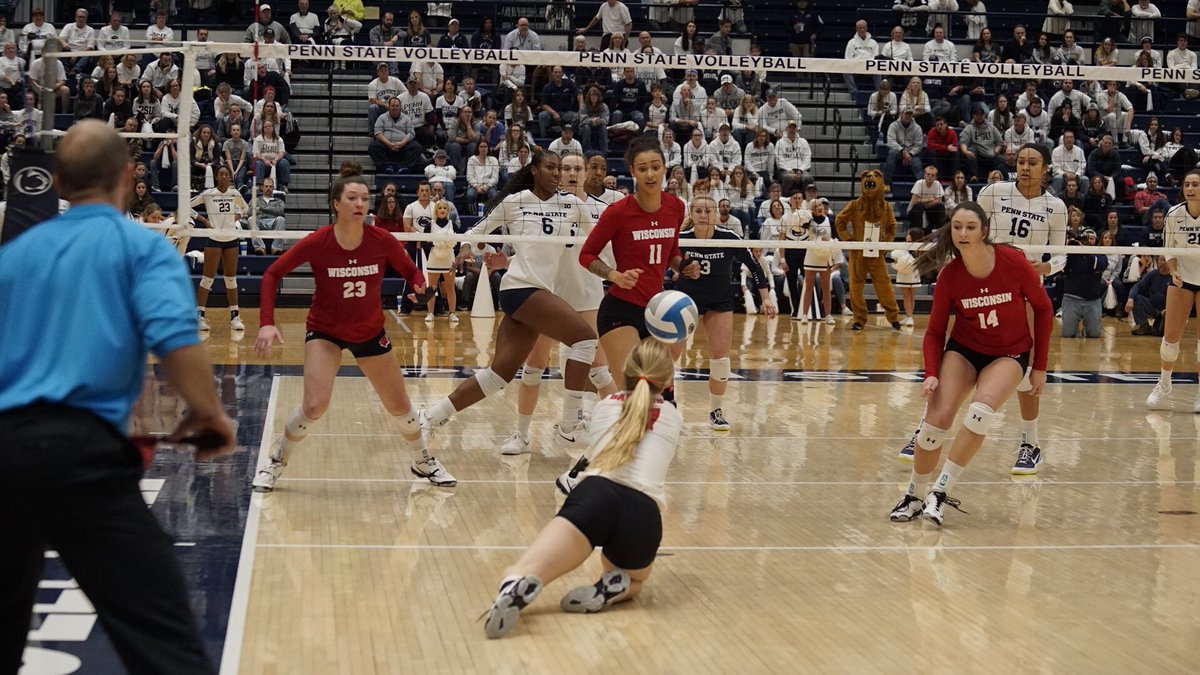 UNIVERSITY PARK, Pa. – It took five sets and extra points, but the eighth-ranked Wisconsin volleyball team terminated No. 7 Penn State in its home gym Saturday night. The Badgers capped off the regular season with a 25-20, 22-25, 25-23, 19-25, 21-19 thriller to finish third in the Big Ten Conference.

Wisconsin (22-6 overall, 15-5 B1G) and Penn State (23-7, 14-6) traded sets throughout the match to set up a fifth-set showdown in Rec Hall. Neither team was willing to go down without a fight, leading to 13 ties and six lead changes during the final frame. A Badger block from Madison Duello and Dana Rettke gave UW set point at 20-19 and helped secure the match after a PSU attack error gave the Badgers the elusive two-point advantage.

At the net, UW and PSU each tallied 13 stuffs. Rettke exploded for a career-high 11 blocks on the night for the Badgers. Rettke also proved powerful behind the service line with three aces for the Badgers.

The second-ever win at Rec Hall. Six wins in a row. One heck of a regular season.

Straight from the court
“It was a pretty close match! All the way through it was pretty close. I thought game two we made a lot of unforced errors as well as the beginning of game four. The other times when we were winning I thought that we were playing a little bit cleaner. We got some really, really good swings on some balls and those guys at the end of the match were just making some incredible digs, really ridiculous digs that against most opponents those balls would be going down to the floor. I liked the mentality that we had. We were fighting off a lot of match points and we were doing it with execution. I thought we passed the ball there when it got right down to it and Syd was running the offense really well. She kept it balanced and I thought Duello was absolutely fantastic.”
-Head coach Kelly Sheffield

The 64-team bracket for the 2018 NCAA Division I Women’s Volleyball Championship will be announced on Sunday at 7:30 p.m. on ESPNU. The Badgers are 43-21 in 21 years of the tournament and are looking for their sixth straight appearance.

Penn State was led defensively by junior libero Kendall White, who scooped up 26 digs. Her 26 digs per her at 503 for the season, giving her a new single season career high, surpassing her 500 digs from her freshman year. She is also now just five digs from breaking the Penn State 25-point era single season record of 507 set by Alyssa D’Errico in 2010. White also now has 1,465 career digs and is just 10 away from surpassing Dominique Gonzalez, who finished her career with 1,474, in the No. 4 spot on the Penn State all-time career digs leader board.

Penn State also got a good defensive outing from its freshmen middle blockers as Kaitlyn Hord and Serena Gray each added six blocks. Gray also added a fantastic offensive performance putting down a new career-high 12 kills on .674 hitting, and was second on the team with 15.5 points. Hord added six kills with no errors for .429 performance.

Offensively, Nia Reed and Allyson Cathey were the workhorses for the Nittany Lions. Reed tied a career high with 20 kills, hitting .294 on 51 attempts. She also added four blocks and two digs. Cathey put down 13 kills for her first double-digit hitting performance since September 23 vs. Ohio State. She also added three digs, a block and an ace.

It was a battle from the beginning, but ultimately untimely errors would be the end-all for the Blue and White.

In the fifth and final set, Penn State fought back from down 8-5, to 10-8, to finally being able to ward off set point, and ultimately go up 15-14. From there the two teams would fight back-and-forth trading set points, but ultimately back-to-back Penn State attacking errors would give Wisconsin the set and the match.

The Nittany Lions await their postseason fate as the NCAA Selection Show for the 2018 Women’s Volleyball Tournament will take place on Sunday, November 25 at 8:30 p.m. on ESPNU.