Wisconsin Rallies Past Illinois Behind Career Night by Rettke 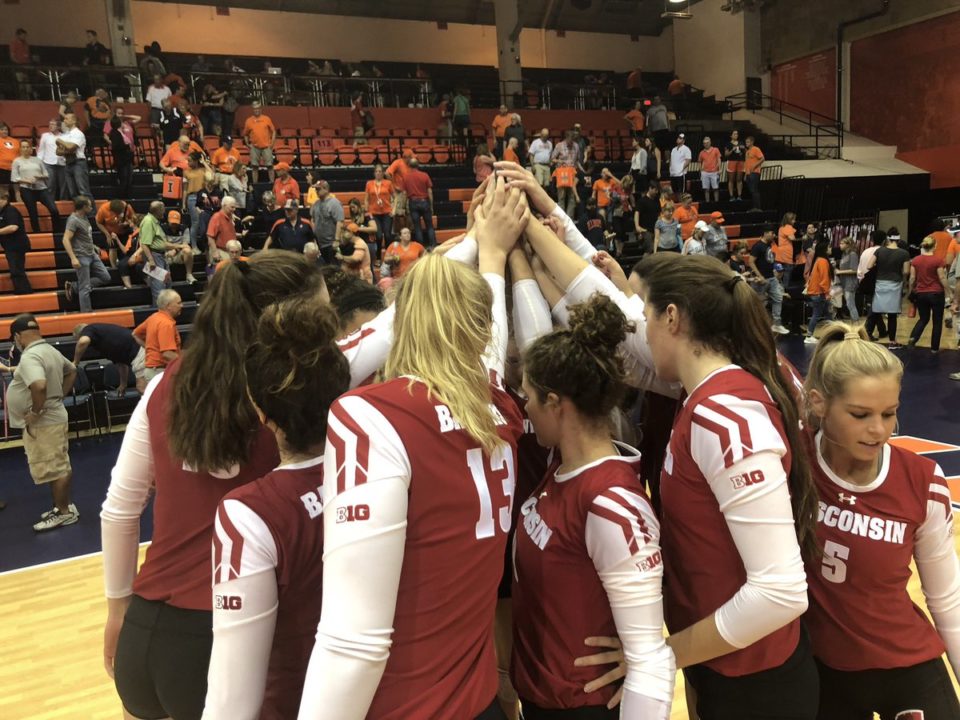 Wisconsin rallied for a four-set win over Illinois, beating the Illini at their own game, winning the block 8-5 and denying Ali Bastianelli the career total blocks record for another match.  Current Photo via Wisconsin Athletics

Wisconsin rallied for a four-set win over Illinois, beating the Illini at their own game, winning the block 8-5 and denying Ali Bastianelli the career total blocks record for another match.

Take a look at the top three plays from @BadgerVB's 3-1 victory over Illinois. pic.twitter.com/0oZYsXTsRh

Dana Rettke piled up a career-high 23 kills and three blocks, while hitting at a .526 clip. Madison Duello added 12 kills and a team-high five stuffs, while hitting .440. Tionna Williams (8) and Sydney Hilley followed with eight and seven putaways respectively, each turning in a .667 hitting effort. Williams also put up a team-high five blocks, while Hilley dished out 49 assists to guide the offense.

Jacqueline Quade notched 18 kills, nine digs and two aces to lead the Illini attack. Beth Prince added 12 kills, but neither managed to hit over .200. Bastianelli downed nine kills, while hitting .316 and putting up two of the necessary four blocks to tie the record, leaving Johannah Bangert‘s career mark within reach against Northwestern on Saturday.

Illinois led by as many as five in Set 1 at 14-9 after a block by Bastianelli and Jordyn Poulter. A hitting error coupled with a block and a kill by Rettke had Wisconsin within three at 15-12. The margin teetered between five and three the rest of the way. A Poulter kill gave the Illini a set-point try at 24-20. A Grace Loberg putaway kept Wisconsin in it, before Prince sealed the 25-21 win.

Wisconsin put up five blocks and limited Illinois to a .048 hitting effort in Set 2, including 11 miscues. The Badgers opted to switch liberos for the stanza, going from M.E. Dodge to Tiffany Clark, a change they would stick with the rest of the match.

Illinois built a seven point advantage at 14-7 with kills by five different players and aces by Taylor Kuper and Poulter. Wisconsin took a timeout and began chipping away, slicing the margin to one at 15-14 on a stuff by Duello and Rettke. Three Illini hitting errors also aided the Badger cause. Down 17-15, UW began a 6-3 run and vaulted ahead 21-18, including three Rettke putaways. Illinois was within one at 22-21, but Williams finished off the set with a kill and two blocks.

The Badgers found their offensive footing in Set 3, hitting at a .368 clip to Illinois’ .262 effort. The Illini led by four midway through at 16-12. Three miscues and a kill by Hilley tied it up at 16. Trailing 20-18, Wisconsin made a charge, grabbing a 22-21 lead with help from two kills and a block by Duello. A hitting error put Illinois back on top at 23-22. The Badgers took a timeout sparking a service error and then kills by Rettke and Hilley to steal away the win.

Wisconsin made just two hitting errors in a .467 hitting effort and served up three aces in Set 4. The Badgers built a three-point edge at 7-4 capped by a Haggerty ace. With the Illini trailing 14-11, Prince notched back to back kills to pull her team within one, but Illinois could not break through. It was a one-point game again at 18-17, but Wisconsin ended the night with a final 7-1 push, including three Illini errors and aces by Duello and Haggerty. A hitting miscue gave Wisconsin the road victory at 25-18.