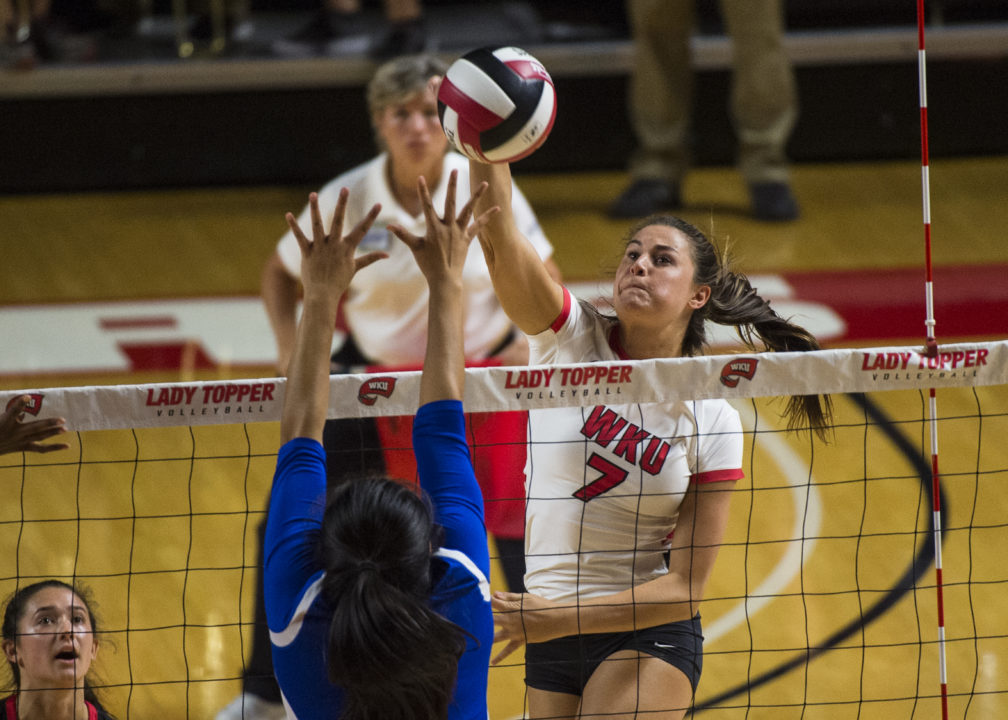 Alyssa Cavanaugh is just the 2nd volleyball player to be named Conference USA Female Athlete of the Year. Archive Photo via WKU Athletics

IRVING, Texas – One of the most decorated student-athletes in WKU Volleyball history, Alyssa Cavanaugh has been named the 2017-18 Conference USA Michael L. Slive Female Athlete of the Year, the league office announced Friday. Across her four years on The Hill, Cavanaugh racked up a total of eight All-American accolades from three different organizations and countless record book revisions to leave a legacy that will not soon be forgotten.

“We are really excited for Alyssa to be named Conference USA’s Female Student Athlete of the Year,” said Director of Athletics Todd Stewart. “This is a tremendous honor, and she is very deserving.  Alyssa had an incredible career and an incredible senior season of both personal and team success. Many times individual awards are a reflection of having great teammates and coaches, and this recognition is very fitting for someone who played a major role in the best four year stretch in our volleyball program’s history. This recognition is very much deserved and is a perfect cap to her historic career.”

.@WKUVolleyball's Cavanaugh owned the second-best hitting percentage in the nation and racked up 489 kills in her senior campaign! She also received @AVCAVolleyball All-America honors all four years at WKU 🏐 pic.twitter.com/yIhwKvi90C

Editor’s note: the other was Tulane volleyball player Sara Radozevic, who in the 2008-2009 season shared the honor with East Carolina softball player Toni Paisley.

“What a great way to cap off a truly remarkable career,” WKU Volleyball head coach Travis Hudson said of the honor. “There are some tremendous female athletes on our campus and throughout Conference USA and for Alyssa to be chosen is truly special.”

Of all players in the nation that took more than 1,000 swings during the 2017 season – regardless of position – Cavanaugh owned the second-best hitting percentage with a scorching .357 clip. Among just the outside hitters, the back-to-back Conference USA Player of the Year led everyone. The Louisville, Ky., native racked up 489 kills on her senior campaign, a mark that led Conference USA and ranked 28th in the country despite the Lady Toppers leading the nation in sweeps with 23.

A headache for opposing squads, Cavanaugh closed her career with the second-most kills by a Lady Topper in program history coming in at 1,816 – a modern scoring era record. Proving to be more than just an offensive powerhouse, Cavanaugh also finished with WKU’s sixth-most solo blocks, 87, in program history.

In the final home opener of her collegiate career, Cavanaugh showed out registering the program’s best-ever single-match hitting percentage at .818 with 18 kills on 22 swings against Tennessee State on August 29.

She earned First-Team All-Conference, All-Region and All-American honors all four years of her career and became the first Lady Topper to earn three All-American nods in the same season (AVCA, PrepVolleyball.com, VolleyballMag.com). Additionally, Cavanaugh was the first Lady Topper to ever earn Third-Team All-American status in addition to being the program’s first-ever AVCA Region Player of the Year selection. In her first year on the scene, Cavanaugh was named the league’s Freshman of the Year as well.

Cavanaugh and her fellow seniors made program history as WKU Volleyball’s first class to play in the NCAA Tournament all four years of their careers. The group twice advanced to the second round of The Dance while going a perfect 12-0 in C-USA postseason matches. During Cavanaugh’s career on The Hill, the Red and White produced a staggering 123-17 record while filling the trophy cases with four C-USA regular season and four C-USA Tournament titles.

The 2017-18 season marked the 15th time that C-USA honored Male and Female Athletes of the Year and beginning this year, following the passing of C-USA’s founding commissioner Mike Slive, the awards will be named in his honor. The winners are determined by a vote of the conference’s Athletics Directors.

Conference USA Athletes of the Year