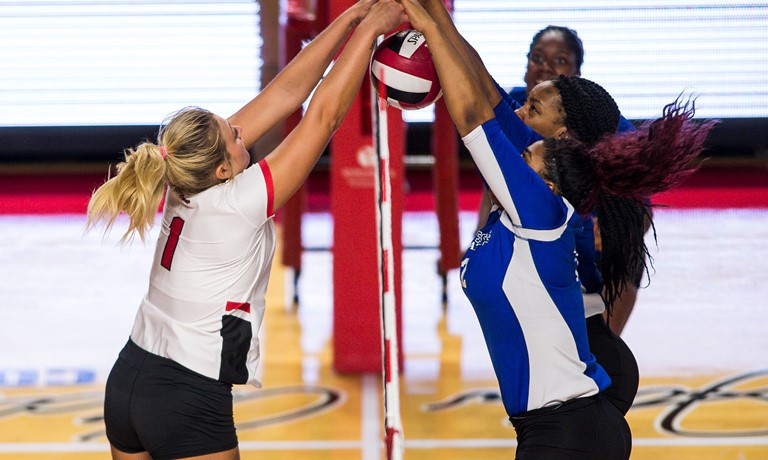 Western Kentucky’s setter, Jessica Lucas, accomplished a huge feat in her career in the team’s last match against St. Louis, as she picked up her 1,000th career dig on her final dig of the night.

Lucas has been a standout setter for the Toppers since her freshman season, where she was awarded an AVCA Honorable Mention All-American honor. That season she dished out 1,338 assists on the year and picked up 306 digs. Her sophomore year was no different, stepping out onto the court to dish out 1,397 assists for an average of 11.18 assists per set. In addition, Lucas picked up 318 digs on the season. These numbers along with her 172 kills and 69 blocks helped her to her second consecutive AVCA Honorable Mention All-American honor.

The Toppers played in five fewer matches during the 2016 season, lowering the sets played from 125 in 2015 to 110. Lucas was still able to hand out 1,280 assists and pick up 298 digs. This once again brought Lucas the AVCA Honorable Mention All-American award.

In her final season with the squad, Lucas has already dished out 401 assists on the year and 78 digs. Her final dig against St. Louis at their home tournament landed her in the 1,000 digs club for Western Kentucky. Lucas is still 374 digs off of cracking the top-ten of the WKU record books, this would tie her with Jordyn Skinner from the 2009-12 season.

And with the weekend wrapped up, we'd now like to congratulate @JessicaMoLucas for registering her 1,000th career dig! pic.twitter.com/xyERsaMLqj