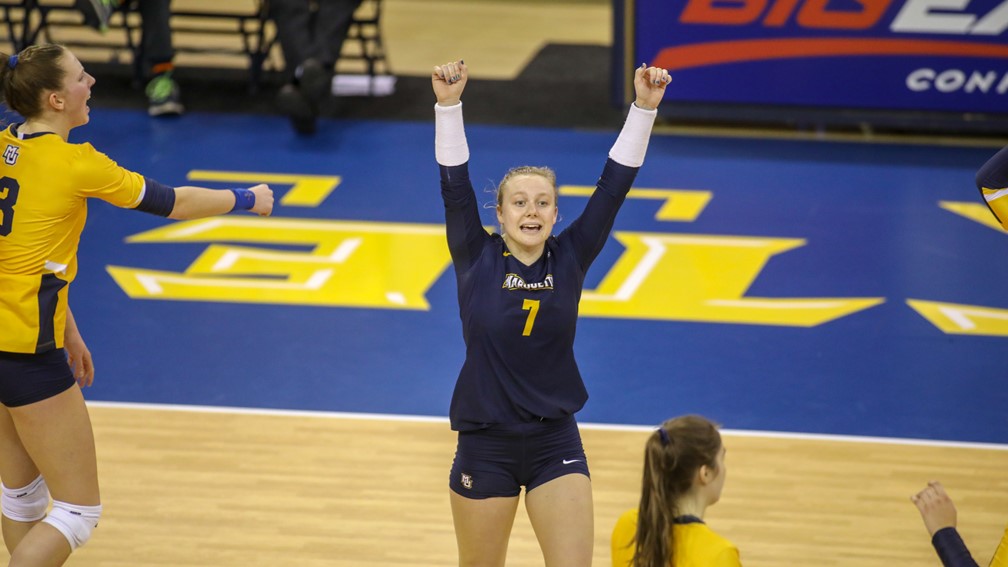 Xavier’s Laura Grossman and Marquette’s Martha Konovodoff take this week’s BIG EAST volleyball Offensive and Defensive Players of the Week honors. Villanova's Clare Delaplane was tabbed as Freshman of the Week for the third time. Current Photo via Marquette Athletics

No. 10 Creighton stayed atop the BIG EAST volleyball standings after collecting two road wins this weekend against Georgetown and Villanova. No. 18 Marquette holds onto second in the standings with sweeps over visiting Butler and on the road at Seton Hall and St. John’s.

Grossman led Xavier in kills and digs over the weekend, averaging 4.25 kills per set and 4.00 digs per set. She posted a career-high 21 kills in a road win at Butler, along with a team-high 24 digs to complete the double-double. Her kills output is second-best in the league in a four set match this season. Against DePaul she recorded 13 kills, eight digs and six blocks. She averaged 4.94 points per set and 1.12 blocks per set overall.

Konovodoff averaged 5.00 digs and 1.33 assists per set over the past week to help Marquette sweep all three of their matches for a total of 45. She had a match-high 15 digs versus Butler and added six assists. Against Seton Hall, she tied a match-high 15 digs again, adding five assists and two aces. Konovodoff also helped hold the Golden Eagles’ opponents to .179 hitting.

Delaplane acquired her third rookie award averaging 4.75 kills over the weekend, which was second-best in the conference overall. She recorded a match-high 20 against Providence and followed that with a match-high 18 in a four-set loss to No. 10 Creighton. She tallied 11 digs in the win against the Friars to complete her fifth double-double this season. Delaplane also added six total blocks for the Wildcats.

Ballenger helped Creighton stay unbeaten in league play over the weekend with the best hitting percentage among conference teams at .500. She hit .615 in a win at Georgetown with eight kills and four blocks. She added 12 kills and three blocks in the road win at Villanova. She aslo helped hold the Bluejays’ opponents to .164 hitting.

Haak averaged 4.22 digs and 4.00 kills per set, helping Marquette sweep three matches over the past week. She recorded a double-double in each match against Butler, Seton Hall and St. John’s. She had 10, 14 and 12 kills, respectively, along with 11, 12 and 15 digs.

Di Maulo averaged 10.62 assists and 3.50 digs per set, equaling two double-doubles over the weekend as St. John’s split a pair of matches. She tied her own league high of 60 assists in a match in a win versus DePaul along with 18 digs. In a loss to No. 19 Marquette, she totaled 25 assists and 10 digs.

Coffey averaged a league-high 11.83 assists per set over the weekend as the Pirates went 1-1. In the win against DePaul she tallied a double-double with 40 assists and 10 digs. She added 31 assists, three digs and an ace versus No. 19 Marquette.

Lough led the Wildcats with 5.38 digs per set in their two weekend contests. She collected a match-high 20 digs and an ace in a win against Providence. She then had another match-high 23 digs in a four-set loss to No. 10 Creighton.