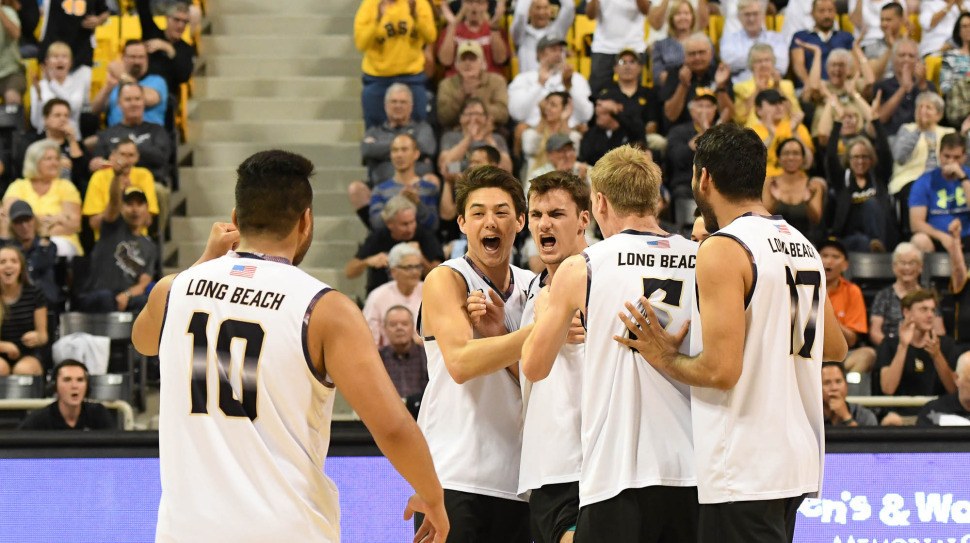 Long Beach was led by junior pin attackers TJ DeFalco and Kyle Ensing. Both finished with 12 kills each, and Ensing scooped 7 balls and blocked three more at the net. Josh Tuaniga, the reigning VolleyMob player of the week, paced the 49er attack to .316 hitting with his match-high 35 assists while also earning 2 blocks on the evening. Libero Jordan Molina finished with a career-high 10 digs. Nick Amado also had an impressive evening; hit attack line (7-1-9) had him hitting .667 while he led all net defenders with 4 blocks.

Stanford was led by their middles blockers. Kyler Presho had 9 kills on 12 errorless attacks for a .750 hitting percentage. His 3 blocks led the Cardinal. Kevin Rakestraw also finished with 9 kills and dug a season-high 4 balls. Setter Russell Dervay ran the attack with 27 assists and had team-highs of 3 blocks and 5 digs.

The Cardinal continue to play without their sophomore starting setter Paul Bischoff, who has missed all-but-two games this season with an injury.

The Beach dropped Stanford (1-6) in straight sets as they have won six of their seven contests in three-set sweeps.

Leading the Long Beach State offense were the junior duo of Kyle Ensing and TJ DeFalco as they each tallied 12 kills in the match. Ensing’s 12 kills came on 26 swings with just two errors for a hitting percentage of .385. Junior setting Josh Tuaniga once again paced the Beach offense with 35 assists leading the lead to a .316 attack percentage.

On defense, Jordan Molina led the back row with a career-best 10 digs at libero, while redshirt junior Nick Amado led the team at the net with four blocks. Amado also contributed offensively with seven kills on nine attempts with just one miscue for a team-leading .667 clip.

In the first set, the Beach and the Cardinal played each other tough with Stanford knocking down 14 kills in the frame and Long Beach State tallying 13. LBSU out-hit Stanford .455 to .333 as the offensively charged contest saw the two team battle through 10 ties and two lead changes. Despite the back-and-forth nature of the set, Long Beach State broke through taking a 15-13 lead on a DeFalco kill which led to a Stanford timeout. The break in action did little to stop the Beach as they surged ahead and took a 21-18 lead on a kill by Bjarne Huus before closing out the game on a kill from Ensing.

The Beach led throughout the second set, only allowing the Cardinal to even the score three times, but never surrendering the lead. Long Beach State hit .308 (11-3-26) in the frame and held Stanford to an attack percentage of just .100 (10-7-30) as the Beach cruised to a 25-19 win.

Long Beach State’s 2-0 set lead over Stanford did not deter the Cardinal as the hosts fought the Beach through six ties and three lead changes in the final set. Stanford jumped out in front 3-0 to start the set, but Long Beach State battled back evening the score at 8-8 before taking a 10-8 lead and forcing a Stanford timeout. The Beach and the Cardinal would exchange points over the course of the set before Long Beach State took a 23-22 lead on a kill off the hands of Ensing which would put the Beach up for good. From there, Long Beach State would go on to claim a 25-23 victory and complete the sweep of the Cardinal.

STANFORD, Calif. – Kevin Rakestraw and Kyler Preshocombined for 18 of Stanford’s 36 kills, but the Cardinal came up short against No. 1 Long Beach State, Saturday, at Maples Pavilion.

Stanford’s middles, Rakestraw and Presho, each tallied nine kills to pace the team. Presho hit .750 (9-0-12) and finished with three blocks. Rakestraw posted a .444 attack percentage and had a season-high four digs.

For the match, Long Beach State registered a sideout rate of 70 percent, while Stanford was at 59 percent.

The Cardinal hung with the Beach in the opening set, hitting .333 and had 10 tie scores and two lead changes. Long Beach State would not relinquish a lead in the second, holding Stanford to a .100 team attack percentage.

The Cardinal rallied a comeback in the third, tying the set at 22-22 as Presho and Dervay teamed up for back-to-back blocks. Long Beach State junior Kyle Ensing then recorded a kill and a block to give. the Beach match-point. Jasper kept Stanford’s hope alive with his fifth kill, but a service error by Dervay ended it.