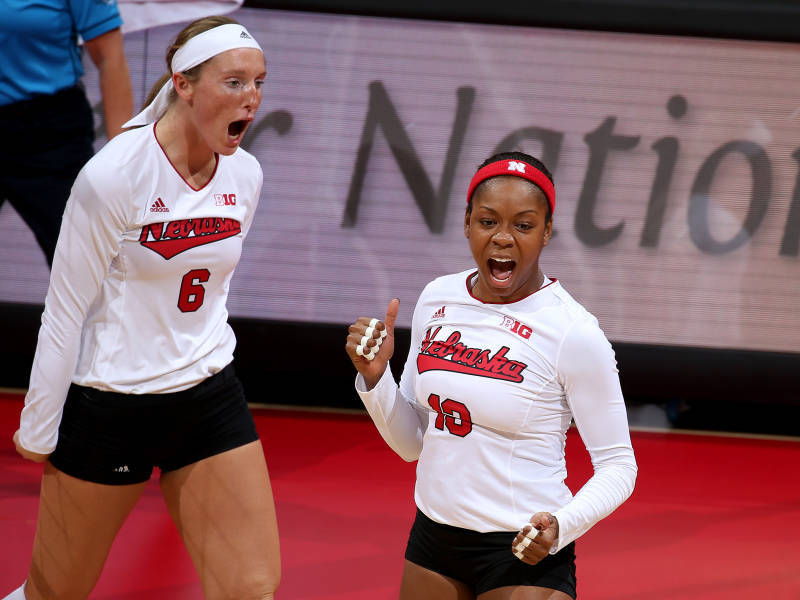 No. 1-ranked University of Nebraska Huskers volleyball team took out the Arkansas Razorbacks in three sets in the first match of the Lobo Classic in Albuquerque, NM.

The Huskers are in the middle of their longest winning streak since the beginning of 2007, claiming their 21st-straight win Friday night against Arkansas, going back to last season. Nebraska dropped the opening set of the season to Florida but have maintained an impeccable record since, winning the past 15 sets and proving they’ve earned their top ranking.

The Hogs claimed an early 10-7 lead in the first set and maintained a close game until Arkansas’ errors caught up with them and allowed the Huskers to pull ahead. Nebraska led a fast and furious second set, claiming a 10-point victory. Although the Razorbacks kept the score tight in the beginning of the third game, the Nebraska defense, coupled with Razorback errors, earned a 7-point lead that the Hogs were unable to recover from.

Nebraska will finish play at the Lobo Classic Saturday at 8:30 p.m. against New Mexico. Arkansas’ final match of the weekend will be an exhibition match against Montreal at 1 p.m. Saturday.

Andie Malloy’s 10 kills and .500 hitting percentage led the Huskers (5-0) to their 21st straight win, their longest win streak since the end of 2006 and beginning of 2007. Since dropping the opening set of the season to Florida, the Huskers have won 15 straight sets.

Kelly Hunter put up 33 assists with four kills and seven digs. Justine Wong-Orantes had 10 digs to lead NU. The Huskers served five aces, four of which came from Annika Albrecht.

Set 1: The Huskers started slowly with three services errors and a -.083 hitting percentage early as Arkansas went up 10-7. A kill by Foecke sparked a brief run that tied the set 11-11, but the Razorbacks rebuilt a 13-11 lead. Kills by Kadie Rolfzen and Malloy evened things up again, 13-13. But Arkansas seemed to have an answer each time the Huskers tied the set, pulling away to 16-14 after another Kadie Rolfzen kill had leveled the score at 14-14. After a timeout, the Huskers picked up their energy level and took the lead on kills by Hunter and Amber Rolfzen and an ace from Albrecht. A smash by Foecke and back-to-back Arkansas errors made it 20-17. Holman and Foecke hammered kills for a 22-18 lead, forcing Arkansas’ second timeout. Holman tacked on a kill and block with Malloy for set point, and the Huskers finished the set on an 11-3 run to win 25-19 after Malloy’s fourth kill.

Set 2: There was no slow start for the Huskers in set two as they jumped out to a 5-1 lead. NU continued to pile on as Hunter placed a kill to make it 8-2. Malloy’s sixth kill on her seventh swing added to the lead, 9-3. The Razorbacks closed the gap to 12-8 before Kadie Rolfzen pounded her fifth kill. A Hunter kill made it 16-11 and put Albrecht at the service line, and she served the Huskers to a 20-11 lead. A pair of kills by Foecke and Holman finished off the 25-15 victory. NU hit .303 in set two and held Arkansas to -.074.

Set 3: Nebraska broke free from a 6-6 tie with a kill by Malloy and ace by Albrecht. Arkansas came back to tie it 13-13, but a kill by Malloy and Arkansas error put NU back in front. A stuff by Hunter and Amber Rolfzen, followed by a kill by Amber Rolfzen put the Huskers up 18-14. Albrecht continued serving tough with a pair of aces, giving her four on the night and building the Huskers’ lead to 21-14. Kadie Rolfzen‘s ninth kill put the match away, 25-21.

Up Next: The Huskers finish the Lobo Classic against host New Mexico on Saturday at 8:30 p.m. (CT). A free live stream by the Mountain West Network will be available here, and the match will be carried by the Huskers Sports Network (107.3 FM in Lincoln and AM 590 in Omaha).

Collectively, Arkansas out-blocked its opponent (6.0-4.0) and finished the match with more digs (37-34) in holding Nebraska to its lowest hitting percentage of the year. The Cornhuskers finished the match more than 100 points below their season average.

Through the opening stages of the first set, Arkansas (1-7) went toe-to-toe with the top-ranked team in the nation, taking a 16-14 lead after a tandem block from Harbin and Breana Jones. Out of a timeout, however, the Cornhuskers used a 6-1 run to go ahead on the scoreboard and used a similar surge of five out of six to secure the opener.

Nebraska (5-0) carried the momentum into the second, building an early 8-2 lead which forced Razorback head coach Jason Watson to use a timeout. Arkansas steadied and pulled to within four points when Jones and Ana Sofia Jusino combined for a block to cut the Nebraska lead to 12-8. The defending national champions pulled away late to take a 2-0 match lead into the locker room.

The teams were out to an even start in the third with Arkansas using another block from Jones, this time teaming up with Barbara Dapic for a 5-5 score. The Cornhuskers used a mini-run to go ahead by three at 11-8 but Arkansas returned the favor with a surge of its own to tie the score at 13-all with a kill by Jones. The Razorbacks cut a once seven-point deficit to three—saving a pair of match points along the way—after a Valle ace.

The team makes its home debut Sept. 16-17 with the Arkansas Invitational at Barnhill Arena. Season tickets are available for purchase through the Razorback Ticket Center with pricing options beginning at $40. For more information, fans can call 800-982-HOGS (4647) or buy tickets online.