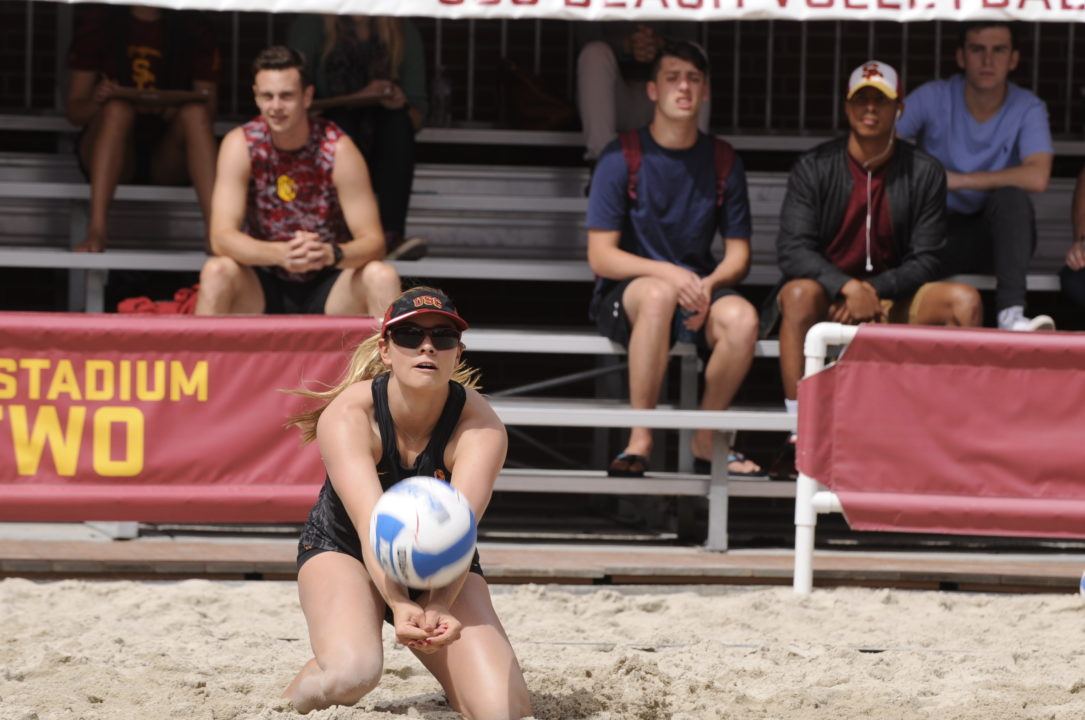 One major streak continued, but one ended for the #1 USC Trojans beach volleyball team on Saturday. Playing at the... Archive Photo via USC Athletics

One major streak continued, but one ended for the #1 USC Trojans beach volleyball team on Saturday. Playing at the USA Volleyball Collegiate Challenge, the Trojans ran their winning streak as a team to 55-consecutive duals.

Aside from that upset, the weekend was another pedestrian dominating one for the Trojans, who are the defending NCAA champions and heavy favorites to repeat in May.

The biggest battle of the day came in Hawaii, where the Sandbows knocked off #2 Pepperdine on senior day in Honolulu. While Hawaii lost at the #1 line to Delaney Knudsen and Madalyn Roh after the match was decided, they won each of the other 4 lines to take a big 4-1 victory.

“We were just ready to play,” Hawaii head coach Jeff Hall said. “It was our time. And we were resilient. I think (in our previous matchups) when we were down a few points, we started to melt and we didn’t this time. We were firing on all cylinders. We’ve had different combinations of flights play well, but tonight was a night where all of our flights played well. It was a special moment and I think our girls feed off the home crowd and wanted to perform.”

Hawaii now has set a school single-season record for wins with already a 21-5 record as the regular season end draws near.

#9 Stetson also had a big day on senior day, beating Coastal Carolina and Mercer to move to 4-0 in ASUN Conference play.

#5 Long Beach State picked up a pair of 4-1 wins, beating Washington and #8 Arizona by the same score.

Both of their game losses came at the #1 line, where the defending VolleyMob National Pair of the Week Nele Barber and Rachel Nieto lost in straight sets, first to Washington’s indoor stars Crissy Jones and Tia Scambray, and then to Arizona’s Madison and McKenna Witt.

“Our team came ready to play this weekend,” Florida State head coach Brooke Niles said. “This is what I have been waiting for all year. On all five spots they worked hard and the people who did not play were supporting each other. It was just a great weekend overall. I am proud of how they competed. There were a lot of different changes in the schedule and the way our schedule has been all year I think we are ready for everything and are peaking at the right time.”

With the win over South Carolina, the Gamecocks’ momentum from Friday, where they beat two ranked opponents. Instead, on Saturday, they went 0-2 against two more ranked opponents, though they pushed Georgia State to 5.