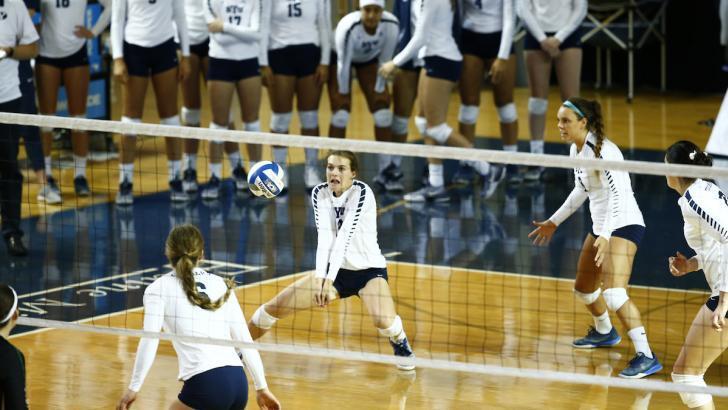 After a tight first two sets that went to BYU, the Cougars pulled away from the Missouri Tigers in the third set to clench their second match win in the Idaho State Invitational and continue their undefeated record.

BYU will play Idaho State next, while Missouri will finish up the tournament against Boise State.

“I loved the fight we showed in this match,” BYU head coach Heather Olmstead said. “Missouri has a well-balanced attack that we had to figure out. I’m proud of the way we competed.”

Boswell led the Cougars with 12 kills on a .381 clip while adding a team-high four blocks. Mary Lake contributed a match-high 11 digs and Lyndie Haddock collected 30 assists.Danelle Parady-Stetler chipped in 10 digs and three aces andMcKenna Miller had 12 kills in the win.

Missouri (5-3) took an early 6-2 lead in the first set against BYU (8-0) with help from a pair of blocks. A Miller kill helped BYU stay in the set, down 7-5, before a Makenna Santiago ace tied the set at 11 apiece. The Tigers scored the next four points, three off of Cougar miscues, to regain their advantage at 15-11. Missouri maintained its lead from there, taking a 20-15 lead from a block, forcing BYU to take a timeout. After the break, the Cougars went on a 7-2 run, with help from kills by four different players, to tie the set back at 22-all. BYU continued its rally with a 3-0 spurt to force extra points and a set one win, 26-24.

Two kills and a block from Boswell helped the Cougars tie the second set at 3-3 early on. After the Tigers took a 6-3 lead, BYU was fueled by a 6-1 run to take a 9-7 advantage. A Parady-Stetler ace extended BYU’s lead to four at 14-10 and a bad set from Missouri put the Cougars ahead 17-12. The Tigers then rallied with three quick points, but a Veronica Jones-Perry kill extended BYU’s lead to six, 22-16. A Whitney Young Howard solo block gave the Cougars set point at 24-18, but Missouri rallied with a 6-0 run to tie the set at 24-all. Kills from Parady-Stetler and Howard then ended the close set 26-24 for BYU.

The Cougars took a 5-3 advantage to start the third set following a Miller kill. The Tigers quickly rallied with a 4-0 run to take the lead at 7-5. BYU countered with a 5-0 rally, which included three kills from Miller, to go back up at 10-7. Missouri used its first timeout of the set after a 4-1 Cougar run gave BYU a four-point edge at 14-10. The Tigers came back within two at 15-13, but another 6-1 Cougar rally, capped off by back-to-back Parady-Stetler aces, extended BYU’s advantage to eight, 21-13. The Cougars cruised from there, ended the set and match 25-17 on a Miller kill.

The Cougars return to action at Reed Gym against host Idaho State later tonight at 7 p.m. MDT. Links to live stats and a video feed can be found on the BYU women’s volleyball schedule page.

Redshirt junior Melanie Crow (Wildwood, Mo.) and senior Carly Kan (Honolulu) were awarded All-Tournament Team honors for their outstanding weekends on the court. Crow led the Tigers in kills (48) and points (58.0), while Kan paced the team in aces (5) and finished second in digs per set (2.18) and points (32.0).

Senior Alexa Ethridge (Lee’s Summit, Mo.) was a mainstay at libero, recording a team-high 36 digs over the Tigers’ three matches.

The Tigers got off to a hot start in the opening set, leading to a late 22-17 advantage over the Cougars. Following a timeout, BYU responded with a 5-0 run and ultimately claimed a 26-24 opening set triumph. Mizzou played well despite the late struggles, as five individuals claimed at least one kill. Crow paced the offense with four kills on .400 hitting in the opening set.

Mizzou and BYU switched roles in the second set, as the home Cougars claimed a late 24-18 advantage. The Tigers staged an outstanding 6-0 run to even the score at 24 apiece. BYU used consecutive kills to take the second set however and tallied its second straight 26-24 set victory. Kan played a pivotal role in the Tigers’ initial comeback, producing a team-high five kills in the set.

The third and final set was all BYU, as it completed its afternoon sweep against Mizzou. The Cougars took advantage of solid serving and hitting, en route to a 25-17 set triumph. Crow and Kan tied for the team-lead with nine overall kills apiece. Senior Emily Thater (Springfield, Mo.) and juniorSydney Deeken (California, Mo.) also performed well offensively for the Tigers despite the match loss. Thater tallied seven kills on .455 hitting, while Deeken produced eight kills on .316 hitting.

Mizzou’s offense was on a mission in the first set, recording 16 kills on .433 hitting. Six different Tigers tallied multiple kills, led by Crow’s five kills on .444 hitting. The Tigers scored points in a variety of ways, including three service aces and three total blocks.

The second set was even better for Mizzou, as it claimed a 25-17 victory. Effective blocking was key yet again for the Tigers, as they added six more total blocks to their total. Through the first two sets, four individual Tigers accumulated two-plus total blocks. The strong Mizzou defense led Boise State to eight attack errors and a .000 hitting percentage. Offensively, Thater shined in the second set with three kills and zero errors.

Boise State’s offense finally appeared in the third set, keying its 25-18 triumph over Mizzou. The Broncos posted 15 kills on .353 hitting, as the Tigers struggled to find an answer on defense. For Mizzou, Crow surpassed 10-plus kills in a match for the seventh time in nine total matches.

Mizzou finished its weekend strong in the fourth set against Boise State, recording a 25-23 match-clinching set win. Crow was excellent on offense for the Tigers, claiming seven of her 22 total kills in the match-clinching set. The Tiger newcomer now has 20-plus kills in two matches this season.

For the sixth consecutive match, junior Courtney Eckenrode (The Woodlands, Texas) paced Mizzou in assists. Eckenrode’s 31 assists keyed the Mizzou offense and it also marked her fourth 30-plus assist match of the year.

Mizzou travels east to Newark, Del., from Sept. 16-17 for its non-conference tournament finale. The Tigers will join Duquesne, Miami (Fla.) and Delaware at the two-day 2016 Delaware Invitational.

The Hearnes Center will host Mizzou’s 2016 Southeastern Conference opener on Wednesday, Sept. 21. First serve between the Tigers and South Carolina is set for 8 p.m. (CT) and the match will broadcast live on ESPNU.