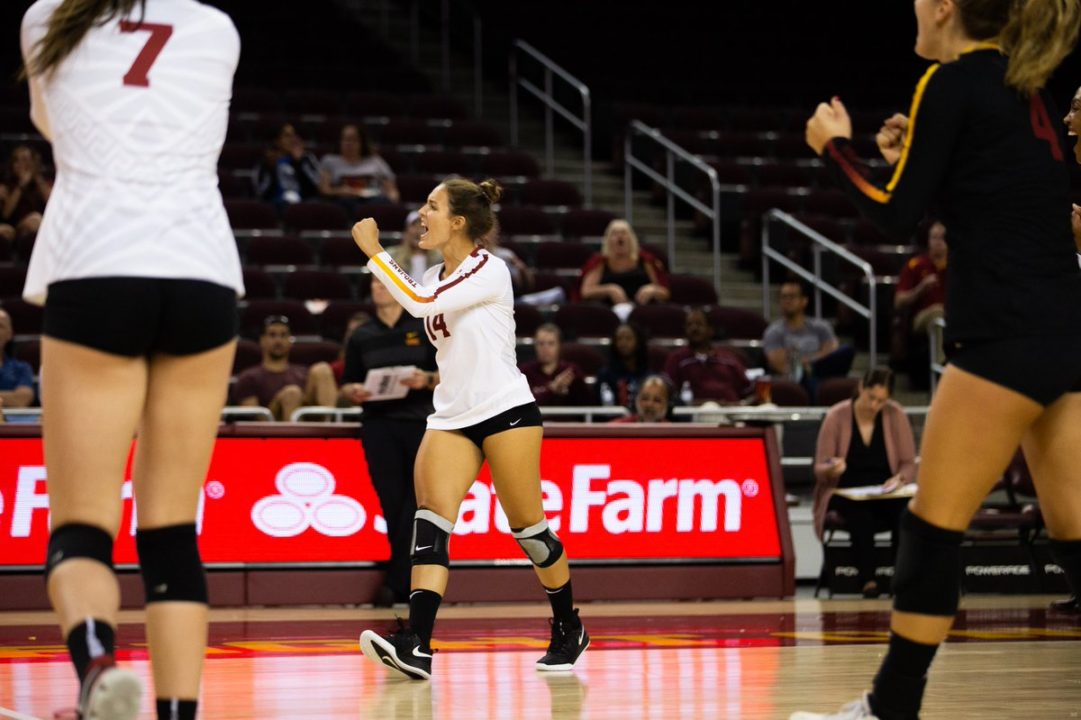 No. 20 Northern Iowa knocked off its second Top 20 foe of the weekend, taking out No. 8 Kentucky, but it was No. 10 USC that came through the Trojan Invitational with a perfect 3-0 record and the title. Current Photo via USC Athletics

No. 20 Northern Iowa knocked off its second Top 20 foe of the weekend, taking out No. 8 Kentucky, but it was No. 10 USC that came through the Trojan Invitational with a perfect 3-0 record and the title.

Stat Leaders: Khalia Lanier led a group of five USC hitters with six or more kills in the match, tallying 11 on an errorless .423 clip (11-0-26) to go with 10 digs and a team-best two aces. Brooke Botkin (8), Madison Murtagh (7), Jasmine Gross (7) and Emily Baptista (6) followed. Gross led the team at the net with nine stuffs, while Raquel Lazaro put up four blocks.

Karlie Taylor notched a match-high 17 putaways and 11 digs for UNI, but it was not enough. Piper Thomas tacked on nine kills and a team-best three blocks, while Jaydlin Seehase (7) and Kate Busswitz (6) rounded out the offense.

How It Happened: UNI grabbed a 12-8 lead in Set 1 only to see USC battle back to tie it at 15-all. The teams tied eight more times down the stretch before the Trojans stole away the 27-25 win with three straight points on two Lanier putaways and a UNI hitting error. The Panthers and Trojans each had a set point try before the final 3-0 run.

USC used six UNI miscues to build a 14-8 lead in Set 2 and later led 19-12 before the Panthers began a comeback. Northern Iowa scored six of the next nine, with two kills and a block by Thomas, to narrow the gap to four at 22-18. Facing set-point at 24-18, the Panthers scored five in a row, including two kills each by Thomas and Taylor, to prolong the stanza. A stuff by Gross and Lazaro capped the 25-23 win.

The Trojans broke away midway through Set 3, using an 8-3 run to turn an 8-all tie into a 16-11 advantage. Lanier notched a kill and an ace and three UNI errors aided the rally. Down 19-14, the Panthers pulled to within one at 20-19 with three errors and a Taylor ace. USC called timeout and finished the deal with five of the next six out of the break. Two kills and a block by Lanier set the table for a final service error.

Stat Leaders: Karlie Taylor put together an 18-kill, 13-dig double-double, while three other Panthers managed double-digit kill tallies. Jaydlin Seehase (14), Piper Thomas (13) and Kate Busswitz (12) were not far behind. Busswitz was the team’s top blocker with six stuffs, while Kendyl Sorge pulled up 20 digs and served up two aces.

How It Happened: End of set rallies were the difference in the first two stanzas, with the Wildcats scoring two in a row to close out a 25-23 Set 1 win and UNI capping Set 2 with a 3-1 run.

The Panthers cruised to a 6-1 lead in Set 5 with two Seehase kills and two Kentucky errors. Three Taylor putaways and an ace by Sorge made it 12-4 UNI. Kentucky stayed in with four fot he next six points, including two Morgan kills, but Busswitz issued the final blow at 15-8.

Stat Leaders: Brooke Botkin and Khalia Lanier each surpassed 20 kills to lead the offense and recorded two of the Trojans’ three double-doubles in the match. Botkin downed 25 kills and added 12 digs and two aces, while Lanier turned in 20 putaways, 14 digs and an ace. Emily Baptista also managed double-digit kills with 13 to go with a match-high six blocks. Setter Racquel Lazaro notched 63 assists and 22 digs. Victoria Garrick pulled up a team-best 23 digs.

How It Happened: USC edged out Creighton 28-26 in Set 1 as both teams struggled offensively, hitting .135 and .116 respectively. Aces by Botkin and Garrick put the Women of Troy up 10-4 in Set 1, but the Bluejays were back within one at 16-15. The teams tied at 17, 18 and 20 before Creighton managed a 21-20 lead on a stuff by Naomi Hickman and Kari Zumach. The Bluejays earned the first set point try at 24-23 and had two more, before USC stole away the win on two Creighton errors and a Madison Murtagh stuff.

The Bluejays hit .263 and served up three aces en route to a 25-23 Set 2 win. The teams played to a 16-all tie before two Botkin kills and a stuff by Jasmine Gross and Lazaro gave USC a 19-16 lead. Creighton chipped away, eventually taking a 23-22 lead on back to back putaways by Kloth. A Botkin kill tied it up, but a hitting error and a Kloth ace sealed the Bluejay win.

USC built a 16-11 lead in Set 2 as Botkin and Lanier turned in four kills apiece. Down 20-14, Creighton made a comeback, slicing the deficit to one at 21-20 with three kills and a block by Kloth, but the Trojans held on for the win. Kills by Lanier and Gross capped the 25-20 victory.

The lead changed hands four times in Set 4, but Creighton grabbed a three-point lead at 21-18 after a 4-1 run including two USC miscues. The Trojans pulled within one twice, last at 22-21, but Ballenger, Winters and Kloth notched putaways to seal a 25-21 win.

Set 5 included 13 ties and saw USC claim victory on their fifth match-point try. The Trojans used a 4-0 run, including a kill and a block by Baptista, to pull ahead 11-8. Creighton answered with four points of their own, incuding a kill and an ace by Winters, to go up 12-11. Putaways by Murtagh, Baptista and Botkin gave USC a match-point shot at 14-13. The Bluejays stopped that one and two more, before Lanier ended the night with the final two of three straight putaways.