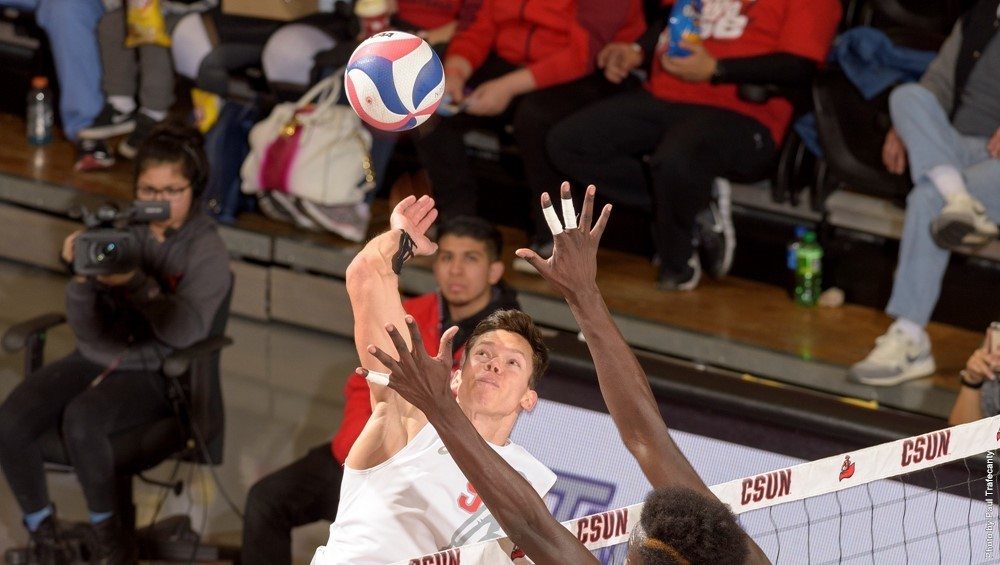 On the strength of 10 aces and .361 hitting, the 12th-ranked CSUN Matadors held off the visiting UC San Diego Tritons in four sets Wednesday in an MPSF match at The Matadome.

“We passed much better than we’ve been passing and although we missed a lot of serves I though we played fairly well against a good UC San Diego team,” said CSUN head coach Jeff Campbell. “We had some solid offensive performances tonight and defensively CJ (Suarez) played really well so I’m feeling really good about this win tonight.”

Junior Arvis Greene had another big offensive night for the Matadors as he connected for a match-high 21 kills on 39 swings to hit .410. Greene also added four digs, two aces and two blocks. Sophomore Dimitar Kalchev also reached double figures in kills with 15 to go with eight digs and a pair of blocks. Kalchev also had three aces giving the NCAA leader 50 this season.

Junior Eric Chance added eight on 12 error-less attacks to hit .667 while also digging a career-high five balls while Josiah Byers had four kills (.200) and a career-high three aces. Redshirt freshman Parker Maki chipped in six kills and two aces as CSUN had 10 aces as a team.

The Matadors hit .361 behind Sam Porter‘s 42 assists and CSUN posted a huge advantage in digs (46-29) as Suarez came within one of his career-high with a match-high 14.

With Porter serving and CSUN holding an 8-6 in the opening set, Maki was instrumental in a 5-0 run as the Matadors opened up a 13-6 lead. The outside hitter from Newbury Park had a pair of kills and a block as CSUN took the lead for good. The visiting Tritons got within five but could get no closer as the Matadors closed the set on a Greene kill.

UCSD opened up a 15-11 lead in set two as Tanner Syftestad connected for one of his three aces. The Triton lead swelled to 17-11 before CSUN engineered a 9-3 run to pull even at 20 following a Kalchev kill. Undeterred, UCSD outscored the Matadors 5-2 down the stretch and blocked a Greene attack on set point to take the 25-22 decision.

After back-to-back aces by Kalchev gave CSUN an early 7-4 lead in the third, UCSD battled back to knot the score at 13-all. A 4-0 Matador run, capped by a Greene ace, put CSUN in front 17-13 and the Matadors eventually made it a 6-1 run to open up a 19-14 lead following another Kalchev ace. CSUN went up two sets to one when Maki’s attack went off the Triton block on set point giving the Matadors the 25-18 win.

CSUN bolted out to an early 8-3 lead in the final set but was forced to hang on late. Leading 20-13, the Matadors had to withstand a late UCSD rally that cut the CSUN lead down to three at 22-19. With UCSD still within reach at 24-21, Chance connected on match point.

CSUN hosts No. 6 UC Irvine Friday night at 7 p.m. to close out its four-match homestand.

A seventh straight defeat dropped UC San Diego to 5-12 overall and 2-10 in the MPSF. CSUN improved to 12-6 overall and 5-6 in league play. UCSD had breezed past the Matadors in straight sets in the earlier meeting between the sides, Feb. 8 in La Jolla.

UCSD trailed 12-6 when it called its first timeout of the opening set. The deficit had opened up just a slight bit more to seven at 17-10 when head coach Kevin Ring used his second timeout. Back-to-back service aces by Josiah Byers left the hosts firmly in command at 21-13 en route to the set victory. Shayne Beamer collected four kills on .667 (4-0-6) hitting in the frame, with Tanner Syftestad adding three kills.

The Tritons got out to a 4-1 lead in game two on a Syftestad kill followed by three Matador errors, including a combination block by Beamer and Syftestad. UCSD led by scores of 8-4 and 12-8, the latter after another Syftestad kill. At 15-11 on a Syftestad ace, CSUN called its first timeout of the evening. The Triton tri-captain served another one coming out of that break, and when Parker Maki’s attack went long, the Matadors needed to talk it over again, down 17-11.

CSUN chipped away and pulled even at 20-20 on a Dimitar Kalchev kill that necessitated UCSD’s final timeout of the set. Tied a fourth and final time at 22-22 moments later, the Tritons knotted the match through a Syftestad kill, Syftestad ace, and stuff block by Ian Colbert and Drew Sloane.

The third set was close throughout the first half, though mostly with the Matadors clinging to a slim edge, until a three-point run and 16-13 bulge caused the Tritons’ first timeout. Arvis Greene, Jr., served an ace out of the stoppage, and before long it was 19-14 in favor of the hosts on a Kalchev ace at the second UCSD timeout.

CSUN trotted out to an 8-3 lead in the fourth. Its 10th ace courtesy of Maki made it 15-9 as UCSD called its final timeout of the contest.

“It was a disappointing loss tonight, in large part because I felt there was more we could do on our side of the net,” said Ring. “We passed pretty well overall on the night. Northridge did finish with 10 aces, but outside of those, I thought we passed a lot of pretty good volleyballs in large stretches. Our offense didn’t match how well we passed. Northridge did a good job blocking at the net. Even though they didn’t stuff the ball, they got some touches and slowed them down. They played really well defensively, out-dug us 46-29, and actually did a nice job converting those digs into sets and swings for kills. That was the big difference in the match tonight.

“We got a nice performance from Ian Colbert, hitting .350. Shayne Beamer was in double digits with 11 kills, hitting .450, so nice production there. We’re just going to need to have more balance in having other positions on the court produce for us as we head into the last third of the MPSF season.”

Syftestad wound up with a team-high 16 kills to join Beamer in double figures. Beamer’s 11 were a season high for the fourth-year senior middle blocker. He and Syftestad put together five blocks apiece, with the latter Triton also collecting eight digs and three aces. Colbert added nine kills and a team-best nine digs. Junior setter Milosh Stojcic dished out 32 assists to go along with two kills, an ace and a block.

True freshman libero Ryan Lew was back on the court after missing last week’s two home dates due to illness, and contributed eight digs and two assists.

Greene led all players with 21 kills for CSUN. Kalchev, the nation’s leader in aces, finished with three of those alongside 15 kills and eight digs. Libero CJ Suarez had a match-high 14 digs. Setter Sam Porter provided 42 assists and nine digs.

UCSD continues a season-long four-match road stretch at second-ranked MPSF leader Long Beach State this Friday, March 3. First serve at Walter Pyramid is set for 7 p.m. The in-form 49ers are winners of nine in a row.