All 14 Big Ten volleyball teams continue conference play this week with 12 matches set to air on either BTN... Current Photo via University of Wisconsin

All 14 Big Ten volleyball teams continue conference play this week with 12 matches set to air on either BTN or BTN Plus.

• Nebraska reclaimed the top spot in the latest AVCA Volleyball Coaches Poll. Eight additional Big Ten programs appear among the top 25: No. 3 Minnesota, No. 4 Wisconsin, No. 9 Penn State, No. 11 Michigan State, No. 16 Michigan, No. 19 Ohio State, No. 22 Illinois and No. 24 Purdue.

• Based on average attendance, the Big Ten has seven of the nation’s top 10 teams. Nebraska leads the nation in attendance, averaging 8,167 fans per contest, while Wisconsin is third with 5,942 and Minnesota is fourth with 4,175. Penn State checks in at No. 5 with 3,631 patrons per match, while Michigan State ranks seventh with 2,753 and Illinois is eighth with 2,656 fans per contest. Purdue rounds out Big Ten programs in the top 10 at ninth, averaging 2,636 fans per match.

• Illinois’ Ali Bastianelli leads the nation with 1.84 blocks per set, while Maryland’s Ashlyn MacGregor is eighth with 1.53 blocks per set. 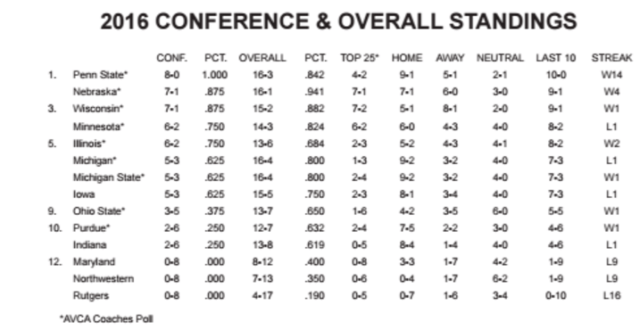 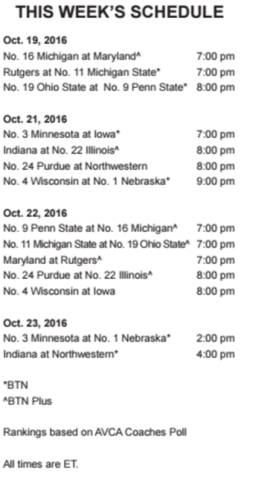