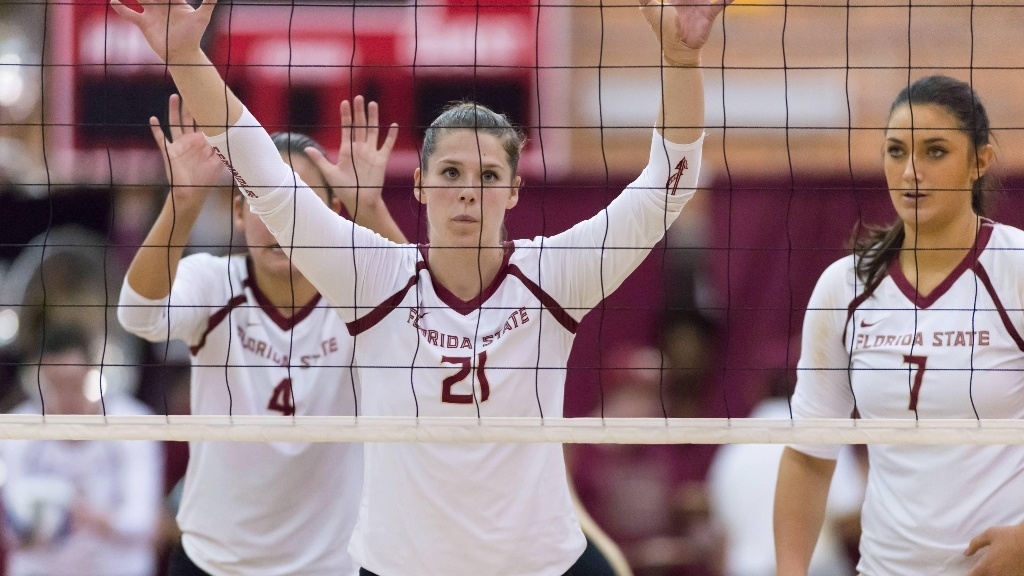 Led by redshirt junior Hailey Luke, the Florida State Seminoles were rocked a strong service game to a 3-set sweep of the LSU Tigers.

Luke scored 3 aces, more than she had in the Seminoles’ first 8 games of the season combined, as part of 7 overall for her team.

This hasn’t been a big part of Florida State’s success this season, but their 2.33 per-set average, even with only 3 service errors, is a season high.

In addition to their new-found service success, the Seminoles held true to their defense at the net which record 11 total blocks across the 3 frames – including 8 block assists from Melanie Keil.

LSU hit pretty well – Gina Tillis led all scorers with 11 kills – but they struggled in the areas where Florida State was strongest. LSU had only 4 aces but 8 service errors in the match, and just 2 total team blocks (both solo efforts from Khourtni Fears).

BATON ROUGE, La. – Melanie Keil posted a match-high eight blocks and recorded six kills while teammate Milica Kubura contributed a team-high eight kills and added four digs to lead 13th-ranked Florida State to its fourth sweep of the season by scores of 26-24, 25-20 and 25-18 at LSU on Sunday afternoon.

Keil, who finished with at least five blocks for the fifth time this season, highlighted a Florida State (7-2) front row that finished with 21 blocks. Joining her with multiple blocks was Natasha Calkins (six), Katie Horton (two) andMara Green (two). Junior Cecilie Woie, who finished with 12 digs, anchored the Seminoles’ back row.

Kubura, the primary source of offense for Florida State, posted a .438 attack percentage after committing only one miscue in 16 attacks. She was joined up front by Horton (six kills), Keil and Green (five).

LSU (5-6) scored six of the first eight points of the third set, before three kills and an assisted block by Keil sparked an 8-4 run by the Seminoles that brought the game to a 10-all tie. It was at that point, with Brianne Burkert in serve, that Florida State had a 7-0 run that included a service ace, four unforced errors as they assumed a 17-10 lead.

Kubura and Keil continued to pose problems for LSU as Kubura drove home two kills and Keil added a kill and a block to provide FSU with a 23-15 edge. The Tigers trimmed the deficit to six before a series of kills by Horton gave the Seminoles their third win over an SEC program this season.

“After one set we could judge where they were going to set,” said Keil. “Blocking is one segment of the game where you read what the setter is going to do because that is the main job of the middle blocker—

figuring out the setter and communicating to the other blockers. By the end of the game that’s what happened. Additionally we were more disciplined tonight, so that was another advantage.”

The Seminoles used a Hailey Luke service ace and four unforced errors to battle back from an early 7-2 lead by LSU in the second set as they forced an eight-all tie. The two teams traded points, forcing six ties, before kills by Keil and Luke gave Florida State an 18-15 edge.

A timeout by LSU briefly pulled the Tigers within two, but a pair of unforced errors along with a service ace byChristina Ambrose and a kill from Keil provided the Noles a 22-18 advantage. Florida State completed the five-point win with a kill from Horton, who penetrated the defense with her second strike of the frame.

Three kills off the hand of Kubura in the first 24 points of the opening set kept Florida State in stride with the host Tigers as the two teams reached a 12-all deadlock. The Seminoles capitalized on two service aces by Luke, establishing a 16-13 advantage, but LSU quickly retaliated with a kills by Toni Rodriguez and Anna Zwiebel to pull even at 16.

The combination of Kubura, Horton and Green on offense kept the Seminoles’ offense in stride as the opening frame reached a climatic 24-24 tie. Luke used her senior expertise to find holes in the LSU offense, forcing a pair of attack errors by Rodriguez to complete the two-point victory.

The Seminoles now turn their attention to a Atlantic Coast Conference play where they host the first of four matches at Tully Gym against archrival Miami (Sept. 23) at 7 p.m. and follow with a meeting against Louisville (Sept. 25) at 1 p.m.

Flory’s Thoughts
“I think we did a great job of preparing how to stop and defend Florida State. I think we created every opportunity defensively to beat them. We held them to 31 kills and did a really good job in a lot of ways.

“Unfortunately, we didn’t perform on the offensive and ball control side. We have to focus in and balance throughout the match. It’s part of having such a young team. I thought we played hard and smart though but have to work on that part.”

What’s Next
LSU opens up Southeastern Conference play against Auburn at 7 p.m. CT Friday. The matchup between Tigers will be aired live on SECNetwork+ through watchespn.com and the Watch ESPN app.

Opening Set
Despite outhitting FSU .297-.233 the Tigers dropped the opening set 26-24. The Seminoles took advantage of seven LSU attacking errors and five service errors in the set. There were a total of 13 tie scores and six lead changes. LSU took a 24-23 lead after a kill by Toni Rodriguez but ultimately dropped the set after a FSU kill and pair of attacking errors.

Second Set
The Tigers hit just .050 in the set with FSU hitting .125 on just six kills. The Seminoles once again took the set thanks to 11 attacking errors. After the squads tied the set at 15, FSU went on to close the match on a 10-5 run to take control of the match.

Final Set
The Seminoles came out on fire with a .314 hitting percentage and committing just three errors. The Tigers hit .098 with eight errors in the frame. LSU got out to a fast start, leading 6-2 early but the Seminoles closed the gap and eventually tied it at 10. FSU never relinquished the lead after that point and led by as many as seven points.

Team Notes
>> OH Gina Tillis led the squad with 11 kills on the day. It marks the eighth match that Tillis has led LSU in kills.

>> MB Khourtni Fears continued her strong season with six kill and a hitting percentage of .400. She has now hit .400 or better in four matches this season.

>> Setter Anna Zwiebel led the way with 28 assists on the day and seven digs.

>> Junior Cheyenne Wood returned to the court as the team’s libero. Wood finished the afternoon with double-digit digs at 17.

>> Rodriguez had her best performance of the season with seven kills. The sophomore added 10 digs to her performance on the defensive end.

For all of the latest news and information on Tiger volleyball, visit www.lsusports.net/volleyball. Fans can also follow the program on its social media outlets at www.Facebook.com/lsuvolleyball along with @lsuvolleyball and @lsucoachfran on Twitter and @lsuvb on Instagram.