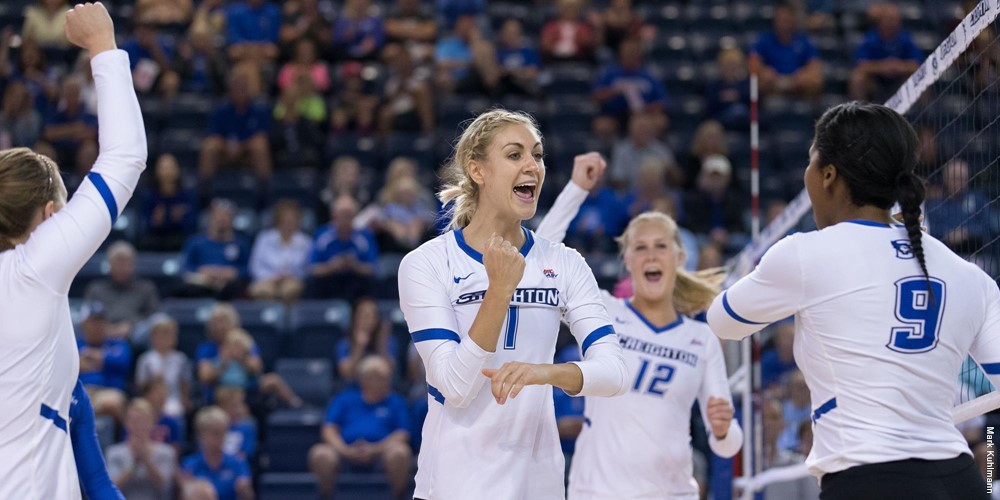 #14 Creighton exacted revenge for their only conference loss on the season with a sweep of (RV) Marquette in straight sets in Omaha, Nebraska. Current Photo via Creighton Athletics

Creighton’s highly efficient offense (.327) saw 13 kills from Jaali Winters, hitting .367 and producing a double-double adding 11 digs to the floor defense. It was Winters’ 7th double-double of the season. Taryn Kloth added 10 kills on .350 hitting. Setter and Purdue transfer Lydia Dimke filled the stat sheet with a double-double of her own, running the offense with 32 assists and 10 digs, while putting down 6 kills and 2 blocks as well. Libero Brittany Witt had a match-high 14 digs to be the floor general on the day.

Marquette’s stud Allie Barber led the visitors with 10 kills and 5 digs. Her 10 kills were her lowest mark of the season since their loss to Butler on September 20. Anna Haak added 9 kills and 6 digs. Setter Lauren Speckman ran the offense with 23 assists. Libero Martha Konovodoff finished with a team-high 11 digs.

OMAHA, Neb. — The No. 14 Creighton Volleyball team strengthened its hold on first place in the BIG EAST with a convincing 3-0 sweep over second-place Marquette on Saturday afternoon before 2,222 fans at D.J. Sokol Arena in Omaha.

The Bluejays came out firing on all cylinders, hitting .591 in a dominant first set. CU took a 6-5 lead after MU’s third service error of the set, and never let up. Brittany Witt, Lydia Dimke and Samantha Bohnet all went on extended serving runs as CU finished the frame on a 14-3 run. An ace by Lydia Dimke capped off the 25-12 victory. Dimke had nine assists, three kills and an ace in the win while directing the Bluejay offense. It was enough to overcome five kills on 11 swings by Marquette star outside hitter Allie Barber.

The second set was far the closest of the afternoon, featuring 16 ties and five lead changes. Marquette led 22-20 late, but the Bluejays rallied to knot the score at 23. A kill from Hope Werch gave the Golden Eagles a set point chance up 24-23, but Marysa Wilkinson and Taryn Kloth answered with Bluejay kills before CU won it on an errant swing from Werch. Jaali Winters had eight kills in the set, and Dimke added 14 assists, seven digs and two kills.

The final set was tied at 8-8 before CU pulled away thanks to some strong blocking. A rejection from Megan Ballenger and Taryn Kloth gave CU the lead for good at 9-8, and a solo stuff by Wilkinson made it 15-11 at the media timeout. Creighton would close out the match on a 10-3 run, capping the sweep when Wilkinson and freshman Naomi Hickman stuffed Barber on match point. Kloth led Creighton with five kills in the final set, and Bohnet, Witt, Winters and Alexa Roumeliotis all had five or more of CU’s 27 digs in the final set.

Winters had 13 kills and 11 digs on .367 hitting, and Dimke added 32 assists and 10 digs on .385 hitting as each returning All-American stepped up with a double-double. Kloth’s late heroics pushed her to 10 kills, and Witt recorded a match-best 14 digs on the day. CU hit .327 and recorded 45 kills, three aces, 59 digs and five blocks.

Marquette was paced by 10 kills by Barber, and 11 digs from libero Martha Konovodoff. The Golden Eagles had 33 kills, two aces, 43 digs and one block on .099 hitting.

Creighton (19-5, 12-1) won the first set with ease, 25-12, but Marquette came back firing in the second frame playing a tightly contested contest with the Bluejays. The score was tied 16 times in the set with five lead changes. Hope Werch connected on a kill to give MU set point, 24-23, but Creighton was able to fend it off and scored three straight points to claim the second, 26-24 and go up 2-0 in the match.

Marquette opened the third set with a strong start, but couldn’t overcome poor hitting, which led to Creighton’s 25-15 win. The Golden Eagles were tied at 8-8, but trailed 15-11 with a media timeout on the floor and saw the Bluejays use a 10-4 run to close the match.

Jaali Winters and Taryn Cloth led Creighton with 13 and 10 kills, respectively as the Bluejays hit .327 combined as a team.