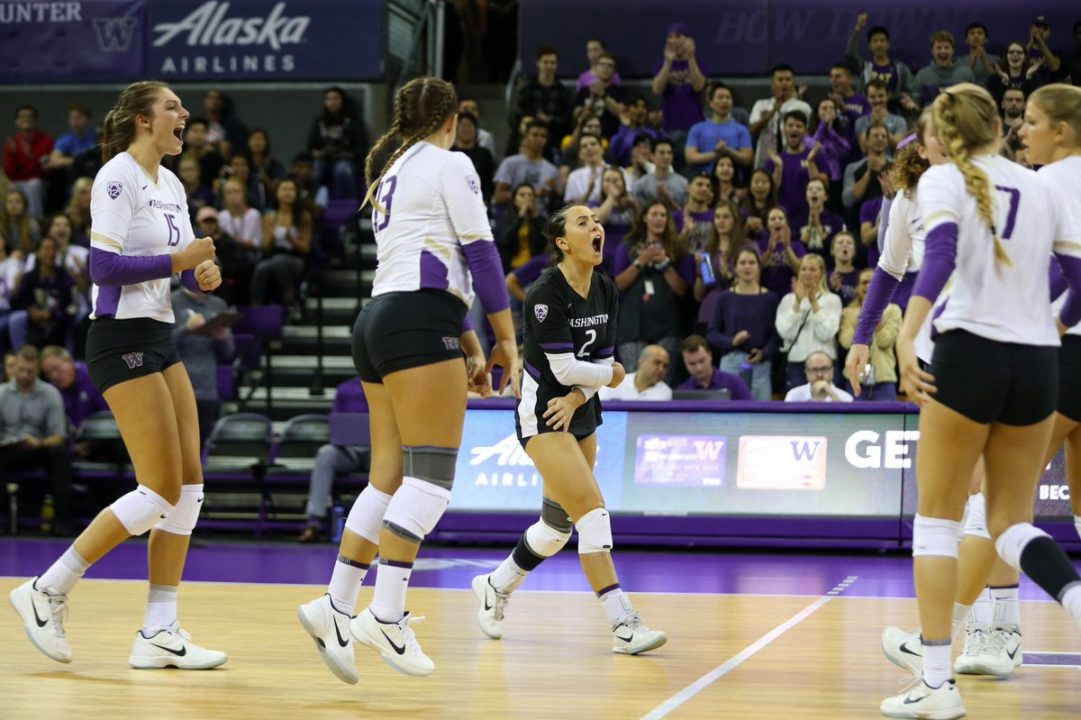 The second night of Pac-12 conference openers featured three matches between in-state rivals. In Eugene, Oregon, it was #16 Oregon who fended off #24 Oregon State in four sets to grab the opening round of the Civil War. Out in Tucson, Arizona, it was the Arizona Wildcats that swept through the Arizona State Sun Devils, in the first matchup of the Territorial Cup Series, the yearlong competition between rivals. Arizona reclaimed the title in 2017-2018 after the title resided in Tempe for five straight years.

In the nightcap in Seattle, it was #14 Washington that survived a five set thriller from #21 Washington State to capture the first Apple Cup meeting this season.

After Washington took the first two sets comfortably, 25-18 and 25-17, it looked as if the Huskies were on their way to a sweep of the Cougars in the conference opener for both teams.

However, Washington State had other plans. After going back and forth early in the third set, the Cougars grabbed an 8-7 lead and would not trail the rest of the set. Washington State used a mini 5-1 spurt to take the third.

In the fourth, the Cougars, again never trailed as they hit .387 as a team and limited Washington to just .094 on the attack. Washington State led by as many as 10 at 24-14 before the Huskies saved a pair of set points. The Cougars would claim the fourth, 25-16.

In the decisive fifth set, both teams traded blows early. But it was Washington who used a 4-0 surge to grab an 8-4 lead and coasted to the finish line with a 15-9 win.

Full highlights of the Ducks' four-set win over the Beavers tonight in MKA ⬇️ #GoDucks pic.twitter.com/Iqq6WZuyzH

🎥 | We broke out the brooms in the Pac-12 opener. pic.twitter.com/d1XgMd2sYT