#14 Kentucky Hits at Record-Tying .548 Clip in Sweep of Loyola 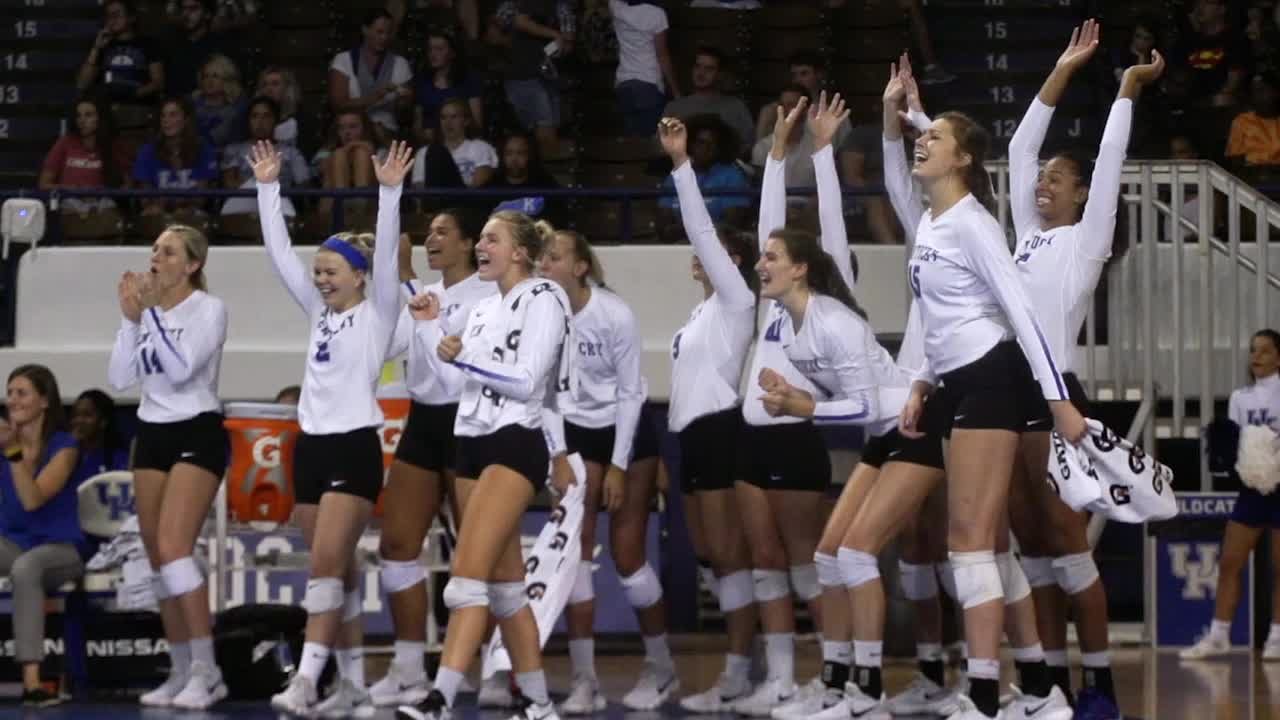 MILWAUKEE, Wis. – No. 14 Kentucky (AVCA 13) hit at a record-tying .548 clip in a sweep of Loyola (Chicago) Saturday night to close out the Marquette Invitational.

The Wildcats hit .500 or better in every set, including a .609 effort in the finale, and outdid Loyola 43-21 in kills. UK also dominated with its block, winning the battle at the net 10-1, and holding the Ramblers to a .000 hitting percentage. Seven aces also aided Kentucky in the sweep.

Kentucky got off to a quick start, taking an 11-4 lead with help from three Emily Franklin kills and two kills and a block by Edmond. The Wildcats increased the advantage to 11 at 19-8 as four players downed kills and Brown put up two blocks. An Ashley Dudek ace made it 24-11, then a hitting error wrapped up the set at 25-12.

Set 2 was over in the early going as UK took a 13-4 lead and continued on to a 25-11 win. Nyberg, Morgan, Brown and Edmond carried the offense, while the Wildcats capitalized on six Rambler error in the set.

Set 3 was much closer in the early stages as the teams were separated by just one at 11-10 midway through. Kentucky pulled away with 11 straight points, including four Edmonds putaways. The Wildcats ended the night with a 3-0 run, inclduing a block and a kill by Jordan Fry.

The offense shined in the sweep. Kentucky tied the school record for attacking percentage in a three-set match at .548. The Wildcats earned 43 kills in the match on just 73 attacks. The Cats committed just three attacking errors and dished out 39 assists while 16 players got into the match.

“I was really pleased with the execution on offense,” head coach Craig Skinner said. “I felt like we were in rhythm in each position and made very smart shots in difficult situations. We killed the ball when we had our opportunities.”

Eleven players recorded at least one kill in the win. Sophomore Leah Edmond led the balanced attack with 14 kills on 26 swings, good for a season-high .423 attacking percentage. Senior Kaz Brown was next up with six kills, while juniors Anna Nyberg and Brooke Morgan put up five terminations. Nyberg’s .833 attacking percentage was a career high.

“Jordan and Kendyl have earned it in practice,” Skinner said. “They’re ready to go. They’re confident. The level of play remained consistent the entire match and I’m proud of our players for committing to the gameplan.”

“Going in to the match I looked around at my teammates and they reassured me,” Paris said. “They told me ‘let’s go, right here right now.’ I went in and just did my thing.”

On the defensive side Kentucky posted 10.5 blocks team blocks. Brown added her 43rd match with five or more blocks in her career after leading the team with five. Lilley and Morgan each recorded four with Morgan adding one solo stuff. Franklin, Fry, Watson, Paris and Skinner each had one block assist.

Dusek posted eight digs in her return from injury for the Cats, one behind the match-high of nine from Curry. McKenzie Watson had six digs and added two service aces.

Kentucky will be back in action tomorrow when the Cats take on Marquette at 2 p.m. ET to wrap up the Marquette Invitational.

Set 1
Kentucky grabbed the first two points of the match with back-to-back blocks. Morgan and Brown earned the first point and Edmond got a solo stuff. Loyola and UK traded points before a four-point UK run gave Kentucky a 7-2 lead and forced an early LU timeout. The Ramblers got a kill out of the timeout, but Kentucky then jumped out to a 10-3 lead after a run capped by two Franklin kills. Loyola was able to cut the lead at 12-7, but a 4-1 run gave UK a 16-8 advantage and forced Loyola to burn another timeout. Play seesawed until set point, where Kentucky won 25-12 after LU made an attacking error. Kentucky hit a scorching .500 in the first set. Franklin, Edmond, Morgan and Skinner all posted three kills while Brown added three blocks.

Set 2
Kentucky won the first point of the set after an attacking error, but Loyola responded to take an early 2-1 lead. The Cats regained that lead with a four-point swing of their own, capped by an Edmond hammer. After Loyola broke the run, UK went on another spurt thanks to a Brown and Lilley block and a Watson ace. Loyola called timeout at 8-3, and Edmond got a kill out of the break. Three more points were rattled off by the Cats after two attack errors and a Nyberg kill until the Ramblers used their second timeout. Teams traded points out of the break until 15-6, where Kentucky earned kills from Morgan and Nyberg to help extend its lead to 17-6. The Wildcats traded points until set point where Nyberg earned the final kill. Kentucky hit .542 in the second frame, while five players recorded a block.

Set 3
Mack got Kentucky started with a kill. Edmond grabbed the lead for the Cats at 4-3. Played rocked back-and-forth until Kentucky jumped out to a small 10-8 advantage. Mack and Edmond went back-to-back on kills to jump out with a 13-10 lead, and a block from Brown, Lilley and Watson forced a Loyola timeout. Kentucky ended up going on an impressive 10-point run to extend its lead to 22-10. UK won the final set 25-11. Kentucky hit a blistering .609 in the final frame and committed just one error. Lilley dished out 11 helpers and Edmond had eight kills.

How It Happened
Kentucky used a fast start to coast to a 25-12 victory in set one. The Wildcats sprinted out to a 7-2 advantage and Loyola was unable to get closer the rest of the way.

Loyola held an early 2-1 lead thanks to consecutive kills by Gresham, but Kentucky ripped off 13 of the last 16 points to seize a commanding 14-5 lead. The Wildcats would go on to earn a 25-11 victory, thanks to a scorching .542 hitting percentage in the set.

Up Next
Loyola returns home Tuesday (Sept. 12) when it hosts city rival DePaul at 7 p.m.