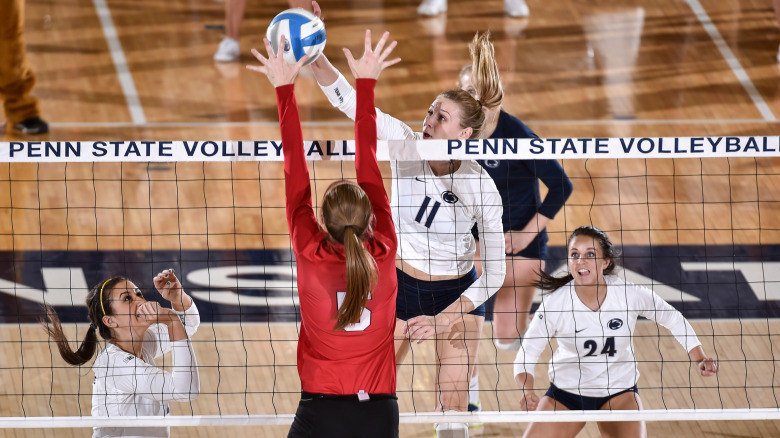 After dropping back-to-back games, the 15th-ranked Penn State Nittany Lions rebounded to top the Purdue Boilermakers at home on Saturday.

Penn State’s outside hitters were unstoppable all night. Ali Frantti had 14 kills on a .583 average while Simone Lee matched her with 14 kills, though just a .281 average. Out of the middle, 6’2″ redshirt freshman Tori Gorrell had 11 kills and a team-high .733 average, along with a team-leading 5 blocks, to seal the inside of the net.

Purdue had just 1 player in double-digits on the day, Danielle Cuttino who had 13 kills and a .182 average.

Penn State’s 50 kills as a team was their highest of the season in a 3-set game, hitting for a .386 average.

Penn State flipped the script from Wednesday’s match, hitting with tremendous accuracy during the sweep. The Blue and White logged 50 kills, the most in a three-set match this season, on an impressive .386 clip, with three Nittany Lions hitting in double-figures.

The outside hitters were tough for the Boilermakers to stop, as juniors Simone Lee and Ali Frantti led the Penn State offense with 14 kills apiece. Frantti charted the kills while logging a .583 hitting percentage and finishing second the team in digs with eight. She also received the majority of Purdue’s serves. Lee added five digs.

Junior setter Abby Detering guided the setting efforts with 41 assists. She added three kills of her own.

Freshman libero Kendall White was impressive once again on the back row, logging a match-high 12 digs.

After opening the match on the wrong end of a 3-1 run, Penn State responded, as kills from Lee and Gorrell paced a staggering 8-1 run for the Nittany Lions, forcing the first Purdue timeout with a 9-4 lead. Purdue tacked on two points before another set of kills from Gorrell, Detering and Frantti pushed Penn State to a 13-7 lead. Gorrell’s fifth kill on six swings made the score 17-10, forcing the Boilermakers’ second timeout.

Lee scored kills on two of the next three plays. A block from Thelen and Gorrell gave Penn State a 20-13 advantage. Washington, Frantti and Detering pounded the ball to take a 23-15 lead, before Lee thumped home the set-winning kill for a 25-17 victory.

The two sides traded point-for-point in the second, as kills from Lee, Frantti and Washington knotted the match, 11-11. PSU turned the tide, taking a lead that would hold with a 3-0 run. At 14-11 Purdue called for a timeout. Penn State took the next three points out of the break to widen the gap to six at 17-11. PSU continued to hold Purdue back before the Boilermakers pulled within one at 22-21. Thelen thumped the ball before back-to-back kill from Frantti led Penn State into the locker with a two-game lead.

Penn State began the third behind before coming back to the set at 7-7 on an error from the Boilermakers. A pair of kills from Lee and Frantti, followed by a block from Detering and Gorrell led Purdue to call for time as PSU led, 11-7.

Gorrell pounded the ball out of the break before Penn State extended the lead to six. Purdue closed the gap to three at 15-12 before a 3-0 spurt, punctuated by another kill from Gorrell gave PSU an 18-12 lead. Purdue called for time. Penn State led by as many as eight before Purdue pulled within four points at 23-19. Lee thundered down the ball before a Purdue error ended the set, and the match, 25-19.

– No. 15 Penn State defeated Purdue (25-17, 25-21, 25-19) Saturday night inside Rec Hall.
– With the win, Penn State’s record advances to 20-9 on the season, with a 12-6 record in Big Ten conference play.
– Penn State’s offense outmatched Purdue’s, with Penn State earning 50 kills to Purdue’s 39. Penn State hit at a .386 clip, nearly .150 higher than Purdue. The 50 kills were the most by Penn State in a three set match this year.
– The Nittany Lions also out blocked the Boilermakers 7.0-6.0. Two Nittany Lions in Tori Gorrell and Heidi Thelen had multi-block nights, earning five and four block assists, respectively.
– This match featured three Nittany Lions with double-figure kills. Ali Frantti and Simone Lee led the way with 14, while Tori Gorrell had 11 of her own.

Ali Frantti, junior outside hitter: Frantti logged 14 kills and added eight digs. Frantti earned the kills on 24 errorless swings, good for a .583 hitting percentage. She led the team in kills for the fifth time this season.
Tori Gorrell, redshirt-freshman middle blocker: Gorrell posted 11 kills on a team-best .733 hitting in the sweep of Purdue. The Canadian product also posted a team-high five blocks during the match.
Simone Lee, junior outside hitter: Lee tallied 14 kills and five digs in the outing. It marks the 26th time in the 2016 season the Lee has led Penn State’s offense.
Abby Detering, junior setter: Detering lead the team to an impressive .386 hitting clip during the sweep of Purdue while dishing out 41 assists. She added three kills of her own and a pair of digs.

At the net, Mohler and redshirt senior Faye Adelaja paced the team with three blocks apiece. In the backcourt, Stahl led the way with seven digs, followed by five each by redshirt sophomore Carissa Damler, sophomore Brooke Peters and freshman Natalie Haben.

The Boilermakers scored three of the first four points of Set 1 and Atkinson went 5-for-6 at the net, but Penn State took the stanza 25-17. Stahl, Cuttino and Evans accounted for the first three Purdue points, but PSU scored five straight to go up 6-3 and went ahead 9-4 moments later. Kills by Cuttino and Mohler cut the margin to three, but the Nittany lions extended their lead to eight at 18-10. Purdue was within six at 20-14 after kills by Adelaja, Cuttino and Mohler, but PSU ended the set with a 5-2 run.

Penn State used a midset rally to take a six-point lead and held off a Boilermaker rally for a 25-21 Set 2 win. The teams split the first 22 points as the lead changed hands four times. Purdue went up 9-8 after kills by Stahl and Cuttino and tied the set at 11-all with two more Cuttino putaways. From there, PSU scored six in a row to go up 17-11. Down 19-14, Purdue scored three straight, including a block by Adelaja and Evans, to pull within two at 19-17. A pair of kills by Mohler made it a one-point game at 22-21, but a trio of Nittany Lion kills stole away the set. Cuttino had six kills in the stanza as Purdue hit .297 to Penn State’s .375 effort.

The Boilermakers jumped ahead 7-5 early in Set 3, but an 8-0 Penn State run forced an uphill battle the rest of the set in a 25-19 Nittany Lion win. An ace and a kill by Stahl and two putaways by Mohler helped Purdue to the early lead. PSU scored eight straight, including three Boilermaker miscues, to go up 13-7. The Boilermakers cut the margin to three at 15-12 after a kill and a block by Evans and a Cuttino kill. Down 22-15, Purdue rallied again with four of the next five points to pull within four at 23-19. Solo stuffs by Adelaja and Stahl and two Atkinson putaways accounted for the stretch. Penn State ended the match with a kill and a Boilermaker hitting error. Atkinson and Cuttino had four kills each in the set, which also saw Purdue put up four blocks.