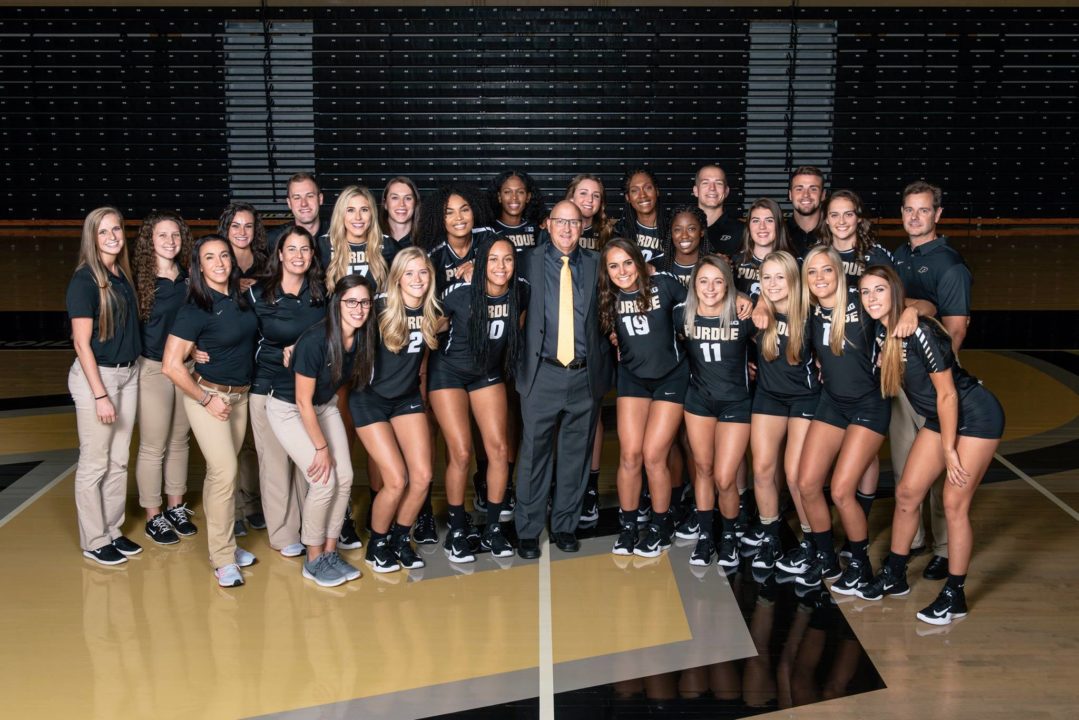 Purdue was led offensively by VolleyMob Player Of The Week Sherridan Atkinson who had match-highs of 10 kills and 3 aces. Senior middle blocker Danielle Cuttino also added 10 kills on .333 hitting and added a match-high 3 blocks. Her sister, Shavona Cuttino, got the start in the middle and added 3 blocks of her own. Senior outside hitter Azariah Stahl filled the stat sheet Wednesday evening, leading the team with 9 digs and adding 3 kills, 3 blocks and 2 aces as well. Redshirt senior Ashley Evans ran an efficient offense with 31 assists and digging 7 balls, while also blocking 2 and adding 2 aces from the service line.

Rutgers had multiple bright spots in its effort. The Scarlet Knights held the Boilermakers to a .206 hitting percentage—-the best defensive effort Rutgers has put on a Big Ten team this season. Yana Kamshilina led Rutgers offensively with 9 kills, hitting .438 on the night. Libero Karysa Swackenberg led all defenders with a match-high 13 digs. Senior setter Talia Holze started her second straight match and dished out 21 assists on the evening.

Five Boilermakers registered six digs or more with Azariah Stahl leading Purdue with nine saves complemented by three blocks and two aces in the contest. Ashley Evans and Brooke Peterseach finished with seven digs to their credit while Evans set the offense on 31 of its 33 kills, added a pair of aces and a pair of blocks. Carissa Damler and Jena Otec both earned six digs while the freshman, Otec, aced the Scarlet Knights three times to match Sherridan Atkinson for the team-leading total.

Atkinson was one of two Boilermakers to tally double-digit kills as the right side hitter matched Danielle Cuttino with 10 kills. Cuttino registered a .333 hitting percentage while denying the Scarlet Knights three times. Shavona Cuttino was also efficient in the middle, adding four kills on six errorless swings to earn a .667 hitting percentage with three blocks.

The Scarlet Knights (5-24, 0-17 B1G) held the nationally ranked Boilermakers (21-7, 11-6) to a .206 hitting percentage, Rutgers’ best defensive effort in a Big Ten match this season. Purdue’s defense was just a tad better on Wednesday, holding Rutgers to a .043 hitting clip while winning the battle at the net with eight blocks to RU’s two.

Senior setter Talia Holze made her second straight start and passed out 21 assists to go with seven of Rutgers’ 29 digs, while sophomore libero Karysa Swackenberg posted her highest dig total (13) since Nov. 1. Freshman outside hitter Yana Kamshilina paced the offense with nine kills on a .438 swing percentage (9-2-16), the rookie’s best hitting mark in a Big Ten contest this season.

Set 1 | Purdue 25, Rutgers 19
Following Rutgers’ match opening point, the two sides traded runs with Purdue’s 7-0 spurt and RU’s answer of four straight, highlighted by McLetchie’s service ace. With the set tied at 8-8, Swackenberg already had five digs. Later, the Boilermakers used a 5-0 run and three service aces to close out the frame, despite a 3-0 stint from Rutgers down the stretch behind two kills from freshman outside hitter Yana Kamshilina and an ace from freshman right side Kamila Cieslik.

Set 2 | Purdue 25, Rutgers 11
An 8-1 run midway through the set helped Purdue to a 16-6 advantage. Kamshilina served up an ace to give Rutgers one of its two 2-point runs of the frame, and Purdue scored four of the final five points.

Set 3 | Purdue 25, Rutgers 18
Rutgers started the set with an all-international front row and two of them (Kamshilina and sophomore middle blocker Stasa Miljevic) picked up a kills while Miljevic and freshman right side Beka Kojadinovic combined on a block en route to a 3-0 lead. Purdue, however, responded with 12 straight and a 15-3 overall run.

Holze’s dump kill and Kamshilina’s eighth kill of the night paced a 3-0 run to bring RU within 17-10. Cieslik and Miljevic bounced kills, then combined on a block as part of a 4-0 run at the tail end of the match.