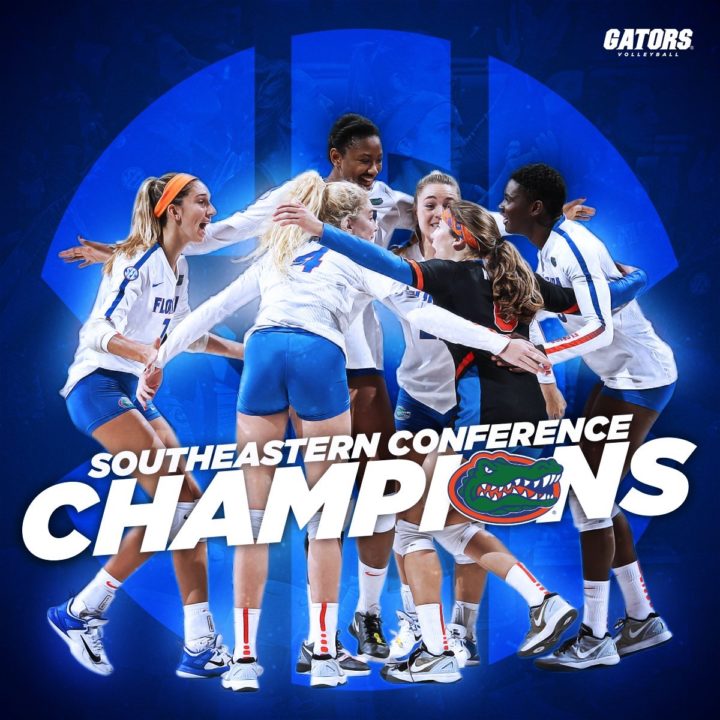 Huge match from Allie Monserez lifts Florida to a share of the SEC crown.  Current Photo via Florida Athletics

Despite a slow match from star middle blocker Rhamat Alhassan, the visiting Florida Gators defeated the host Missouri Tigers in four sets, clinching a share of their 23rd SEC championship in program history. Set scores were 23-25, 29-27, 25-15, and 25-23. Allie Monserez had a huge match for the Gators, dishing out 49 assists to go along with 14 digs as she guided three Gators into double digit kills, led by Shainah Joseph’s 19. Rachael Kramer and Carli Snyder chipped in 14 and 10 kills respectively as Florida improved to 25-1 (17-1 SEC) and they will await to hear their seeding for the NCAA Tournament, with the most likely scenario being a #1 seeding.

The match was fairly even across the board as Florida led in aces 3-2, digs 55-54, and hitting percentage .283 to .207. Missouri led the match in kills 51-47, and assists 59-55, while both teams collected 11 blocks. The win also clinched a milestone for coach Mary Wise as she collected the 900th win of her historic career.

Despite the loss, Missouri finished in third place in the SEC with a record of 20-11 (13-5 SEC). Melanie Crow led the Tigers with 17 kills while Alyssa Munly chipped in 10 kills (.556) and three blocks. Courtney Eckenrode handed out 32 assists to go along with 16 digs.

On what made Florida tough today…

“Honestly, good teams make good plays. They’re No. 3 in the country for a reason. I thought they did a great job of coming up big with great defensive plays. As tough as it was to lose that close of a set (second), Florida earned it. I thought we really played well until the end, but they just made bigger plays when they had to.”

“During that last set, I was thinking ‘how good would we be if we played these guys every week?’ I thought we did a lot of good things today. We had chances to win in sets two and four but just couldn’t quite get it done. I think you still can take away a lot of really good things though. We really battled and competed well.”

Despite the loss, the Tigers finished in third place this year in the Southeastern Conference with a 13-5 record. Mizzou has claimed a Top-3 finish in the conference standings in three consecutive years and four times in the past five seasons.
For the 20th time this season, Mizzou produced 10-plus total blocks at the net. The Tigers closed their regular season with five consecutive double-digit block efforts.
Heading into postseason play, Mizzou sits with 360.5 total blocks for the year, marking a new program single-season team block record.
The Tigers’ 521 block assists this season also ranks tops in program history, while their 3.02 blocks per set places second and 100 solo blocks ranks eighth all-time.
Crow ended her regular season on a high note, highlighted by two consecutive double-digit kill matches. Overall this year, the Wildwood, Mo., native has produced eight 10-plus kill matches, while moving her Tiger career double-digit kill match total to 31.
Munlyn was an efficient offensive weapon at middle blocker, recording 10 kills on 18 swings and zero errors. It was the sixth time this year that Munlyn had gone error-free in a match.
Eckenrode’s team-best 10th double-double this year was also her sixth in SEC play. The Tiger setter tallied double-doubles in three of her last five conference matchups.
Riley Sents shared the team lead with 16 digs against the Gators, marking her team-best 22nd time in leading the Tigers in single-match digs.
Kayla Caffey played a pivotal role into Mizzou’s defensive success at the net, as she matched her season high with eight total blocks. The Chicago, Ill., native finished with eight blocks on three separate occasions this season.

Visit MUTigers.com for the latest information on all things Mizzou Volleyball. You can also find the Tigers on social media by liking us on Facebook (Missouri Volleyball) and following us on Twitter and Instagram (@MizzouVB)

Though the title is shared by Florida and Kentucky, both of which finished with 17-1 records in conference play, the Gators will be awarded the “automatic qualifying” berth for the NCAA Tournament by virtue of winning four sets compared to three in their two head-to-head matchups with the Wildcats.

The surprise performance of the match came from sophomore outside hitter Morgyn Greer, who set a career high with 10 points and matched her career high for kills (nine). Greer’s .429 hitting percentage was a season high.

After dropping the first set, 25-23, the Gators trailed 19-12 in the second set. Four dual blocks by 2017 SEC Player of the Year Rhamat Alhassan, who had a match-high eight roofs, and redshirt junior setter Allie Monserez fueled a 14-3 run that gave Florida a 23-22 lead. The Gators lost their first set point, fought off a Missouri set point, and dropped two more set point chances before a Tigers attack error gave them a 29-27 win.

Florida opened the third set on a 12-3 run, with kills from five different Gators. It went on to register a .483 clip and take a 25-15 win. The Gators led the majority of the fourth set, but they broke a 23-23 tie with a kill from Joseph and a dual block from Alhassan and Joseph to clinch the match.

NOTABLES
2017 is now the 27th consecutive 25-win season for the Gators—which is the longest active streak in the nation by 11 years
This is the first time since the streak of 18 consecutive SEC titles (1991-2008) the Gators won the conference crown two years in a row
Florida lost the first set for only the fifth time this season, but it improved to 4-1 in such matches
The Gators allowed their opponent to hit above a .185 clip (.207) for just the fourth time in 26 matches this season
Shainah Joseph‘s 19 kills and 19.5 points were the second-highest totals of her career, only trailing the 20 kills and 21.5 points she recorded against Missouri on Nov. 12
Joseph logged at least 15 points for the fourth time in her career and third time this season
Joseph finished with 10-plus kills for the ninth time this season and 10th time in her career
Joseph is hitting .413 with 115 kills in Florida’s last 10 matches
Rachael Kramer has 14 matches with 10-plus kills this season after only having six a year ago
Allie Monserez posted a season-high 49 assists
Florida improved its all-time record against Missouri to 7-4, and snapped a three-match losing streak in Columbia
Mary Wise joins Peggy Martin (Central Missouri, Spring Hill – 1,282 wins, 41 seasons) and Julie Jenkins (VCU, Trinity – 910 wins, 34 seasons) as the only female head coaches in NCAA history to reach the 900-win plateau
Wise is the 12th head coach in NCAA history to reach the 900-win plateau

(COACH) WISE’S WORDS
Mary Wise on battling back after being down 19-12 in the second set and winning the SEC title…
“There was a point leading up to that second timeout where, it wasn’t lack of effort, we were just pressing too hard. Service errors, net errors blocking … there was a ‘want,’ we were just making it difficult by not staying disciplined. We made the decision to play Allie (Monserez) in a 5-1 to try and get the offense started. As well as Missouri played, and to do it on the road, that’s about as big-time as you get during the regular season. We’re proud to share (the title) with a great Kentucky team.”

Wise on the SEC title and what it means to this group of seniors…
“For (the seniors), this team has worked so hard and their mantra has been ‘find a way.’ And they did. They found a way in the second set to make this happen. For them, when they come back years later and they get to see the banner, those are special moments. They’re part of history. Sometimes titles help you recognize that easier.”

Wise on what winning a tough match like this does for the team’s confidence heading into the NCAA Tournament…
“When your team can find a way when it’s not easy … there are teams who win when they’re frontrunners, but to come from behind against a very talented Missouri team that’s playing well, to have that kind of fight and grit, that’s the persona you want to take into the tournament. We don’t have to try and create that. We are that.”


UP NEXT
The Gators await their NCAA Tournament seeding, which will be revealed Sunday at 9 p.m. ET as part of a selection show broadcast on ESPNU