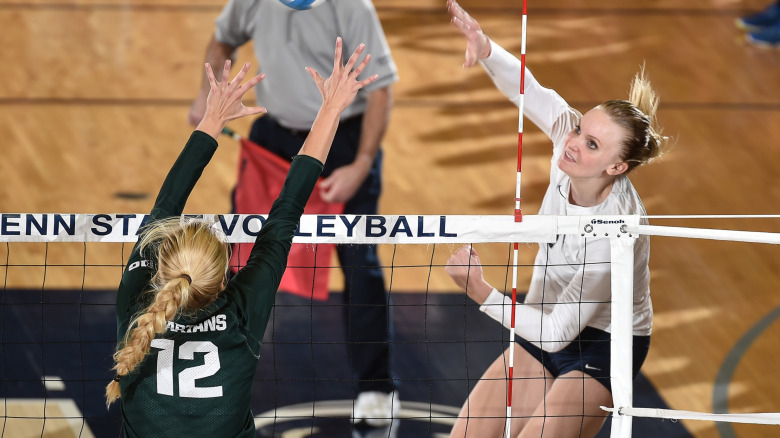 Senior outside hitter Ali Frantti put down a match-high 17 kills, while the Nittany Lions hit at a .307 clip as a team in a sweep of Colorado to open the Big Ten/Pac-12 Challenge on Friday.  Current Photo via Penn State Athletics

Senior outside hitter Ali Frantti put down a match-high 17 kills, while the No. 2 Nittany Lions hit at a .307 clip as a team in a sweep of Colorado to open the Big Ten/Pac-12 Challenge on Friday.

Colorado took an early 5-3 lead in the match, but Penn State countered with a 4-0 run to take the lead. Frantti, Lee and Nia Reed tallied kills in the rally. After a tie at 9-all, the NittanyLions pushed ahead by four at 16-12 as five players turned in kills. PSU boasted a 21-16 lead en route to the 25-22 final score.

Penn State wasted no time establishing itself in Set 2, cruising to a 9-2 lead with help from three kills and back-to-back aces by Lee. Colorado clawed back to within two at 15-13 thanks to four PSU errors and a kill and an ace by Smith. Penn State scored three straight, on two blocks and a kill by Washington, to go ahead 18-13, a margin the Buffaloes could not overcome.

The Nittany Lions jumped out to a 6-1 lead in Set 3, as Detering put down three kills, only to see Colorado slice the margin to one at 8-7 and eventually knot the score at 12 and 13 as Shebby downed three kills. PSU used a 4-1 run to gain separation at 17-14. The Buffaloes were within one at 18-17, but Penn State maintained the edge, going up 22-19 on a Detering kill. The Nittany Lions closed out the sweep with three of the final four points. Detering pounded down six kills in the final stanza.

The senior opened up with seven kills in the first set, swinging at a clip of .545.

She finished the match with a season-high 17 kills to lead all attackers while hitting an efficient .469 at the pin. She also snagged six digs.

Fellow outside Simone Lee (Menomonee Falls, Wis.) added 11 kills and neared a double-double as she added eight digs. Her eight pickups moved her over 300 career digs.

Both setters added double-doubles as Abby Detering(Mentor, Ohio) put down 10 kills on a clip of .692 and dished out 21 assists.

In the third set, Detering went a perfect six-for-six on her attack attempts to help spur the Nittany Lions to the clean sweep.

Penn State returns to action on Saturday, Sept. 9, with a 6 p.m. ET match against No. 4 Stanford. This will be the second meeting between the two squads in eight days. Penn State took the first match, 3-1, on Sept. 1.

Colorado put up a great battle, but ultimately suffered its first loss of the season at the hands of third-ranked Penn State on Friday afternoon, 3-0, in the first match of the Pac-12/Big Ten Challenge.

The Buffs never backed down to the perennial powerhouse throughout the entire match and out-blocked the Nittany Lions 9.0-5.0 with three players posting two or more blocks in the contest. Junior middle blocker Naghede Abu led CU with four blocks, including one solo, while senior Anna Pfefferle was second with three total blocks (one solo and two assists). Junior Frankie Shebby also posted one block solo and one block assist.

WHAT HAPPENED: Shebby, along with junior Alexa Smith led CU’s offense with double-digit kills. Smith tallied 11 in the effort, while Shebby had 10 kills and added 12 digs for her third double-double this season. Abu and senior Joslyn Hayes were tied for third on the team with five kills each.

SET 1: The Buffs had a 5-3 advantage to start the match before the Lions recorded four straight points to go up 7-5. The Buffs answered back with a point and gained a bit of momentum, tying things up 9-9 a short time later, but PSU responded with three straight points to regain the lead. The Lions went up 21-16 late in the set, forcing the Buffs to take a timeout, and despite scoring after the break, CU was unable to get back in the set, falling 25-22.

SET 2: Penn State came out fast in the second set, and despite a valent comeback attempt, the Buffs were not able to catch up. The Lions went up 5-0 right off the bat and after going ahead 9-2, forced the Buffs to take a timeout. CU fought hard and brought the set within a pair of points at 15-13, but PSU responded with three consecutive points (18-13). The Buffs were able to get the frame within three points again late in the set (20-17), but were unable to finish the comeback, falling 25-18.

SET 3: After regrouping during intermission, the Buffs scored the first point, before PSU went on a 6-1 run to cause the Buffs to use a quick break.  After the timeout, CU scored and possession went back and forth between the teams until the Buffs went on a three-point run, slashing the Lions’ lead to 8-7. The Buffs kept things close, eventually evening up the set 12-12 and then again 13-13. Despite this surge, PSU pulled away late in the set, going 3-1 with the Buffs in the final points to secure the set, 25-21.

NEXT UP: The Buffs will be back in action at the Pac-12/Big Ten Challenge on Saturday against Illinois. First serve is set for 1:30 p.m. MT. Link to live stats, live stream and radio broadcast are available at CUBuffs.com.

QUOTES:
Head coach Jesse Mahoney
“I thought we played well offensively, well enough to win a lot of matches. But we didn’t put enough service pressure on Penn State to get them out of system. They are hard to defend when they can set all options.”