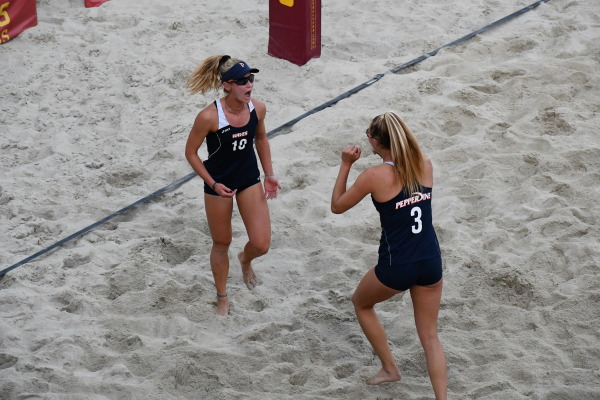 A week layoff did not dull the skills of the No. 2 Pepperdine beach volleyball team, which won its fourth straight match and second in a row over No. 4 USC on Monday.  Current Photo via Pepperdine Athletics

A week layoff did not dull the skills of the No. 2 Pepperdine beach volleyball team, which won its fourth straight match and second in a row over No. 4 USC on Monday.

The Waves had not played since going 3-0 at their own Pepperdine Invitational on March 31, a tournament which ended with a 4-1 victory over the Trojans.

This time, the match was a bit closer. Pepperdine won on Courts 4 and 5 to start, then USC responded with wins on Courts 1 and 3. It all came down to the No. 2 duo of Brook Bauer and Madalyn Roh, which bested USC’s Joy Dennis and Brianna Sizemore 21-13, 2-19 for the win after trailing early in Set 2. The match was Sizemore’s first since March 11 due to a lower leg injury.

On Monday, all five matches were completed in straight sets. Pepperdine moved to 19-3 on the year, while USC fell to 17-9.

With a win on Court 4, Pepperdine’s Skylar Caputo and Alexis Filippone moved to 21-1 on the season and won their fourth-straight match since dropping a three-setter to UCLA’s Mac May and Elisa Zappia on March 27. Caputo/Filippone are 4-0 against USC this season.

USC’s Abril Bustamante and Tina Graudina are now 18-1 on Court 1 and have won nine-straight matches.

Up next for the Waves are Saturday home matches against No. 5 Cal Poly and No. 12 Arizona.  Meanwhile, USC is set for a weekend stay in Seattle, where the Women of Troy will face No. 13 Cal, No. 14 Stanford, Washington and Oregon at the Pac-12 North Invitational.