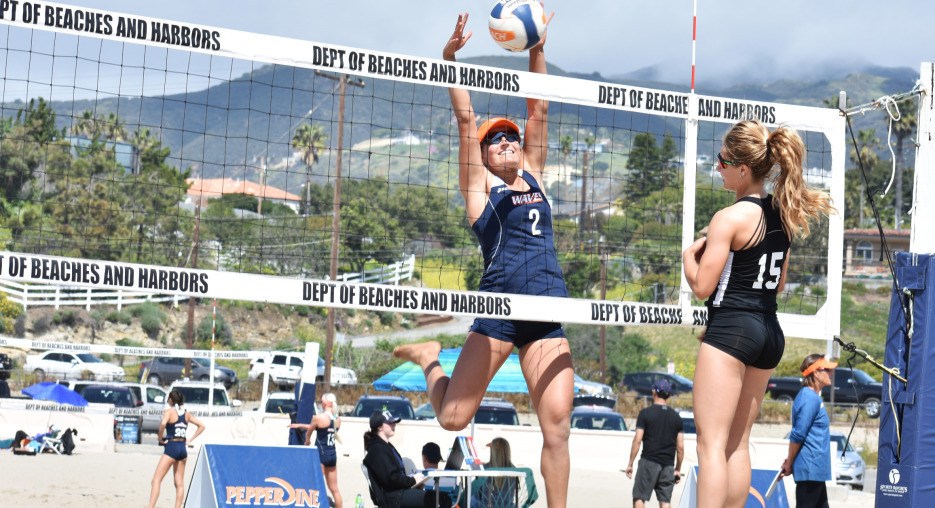 Against the Roadrunners, the Waves came out strong as the No. 5 pair of graduate student Tiffany Morales (Hermosa Beach, Calif./Redondo Union HS/Michigan) and sophomore Nikki Lyons (Fort Lauderdale, Fla./St. Thomas Aquinas HS), put down Sidney Wicks and Hannah Manzanares with 21-5, 21-6 results.  Lyons led the pair with 16-kills, while adding five aces and one block.  Morales was strong with four aces and 11-kills throughout the match as well.

Then, Waves’ No. 4-partnership was up to the task, sophomore Anika Wilson (Santa Barbara, Calif./San Marcos HS) and freshman Deahna Kraft (Seattle, Wash./Garfield HS) clinched the dual with a 21-7, 21-11 victory over Sarah Garrow and Ally Barber.  Wilson led the duo with 13-kills, while posting three blocks.  Kraft commanded the service line with six aces and added 12-kills and two blocks.

Pepperdine’s winning ways weren’t over for the dual, however and on court one, senior Delaney Knudsen (Valencia, Calif./Valencia HS) and sophomore Madalyn Roh (Scottsdale, Ariz./Chaparral HS) bested Carol Grasso and Sara Little with a 21-9 first set and a well-fought 22-20 second set.  Knudsen led the pair with 13 kills, while adding one ace.  Roh was solid with 12 kills, two blocks and two aces.

Pepperdine’s No. 3-pair Skylar Caputo (Manhattan Beach, Calif./Mira Costa HS) and Heidi Dyer (San Clemente, Calif./Saddleback Valley Christian HS) completed the first sweep of the day with a 21-5, 21-19 victory over Emily Lopes and Mattison DeGarmo.  Caputo and Dyer each tabbed two aces, while Caputo led the pair with 14-kills and Dyer tallied 12-kills and one block in the match.

In the second match, the fight was solid on both sides of the net as Pepperdine won five courts in 10-sets over Cal Poly.  Caputo and Dyer finished first with a quick 21-11, 21-16 win over Raeann Greisen and Heather Pembroke to start the second half of the day.  Roh and Knudsen then dominated court one with a 21-7, 21-18 victory over Emily Sonny and Hannah Hubbard.

Dyer led the match with 16-kills, while Caputo posted seven-kills, five aces and a block.  Knudsen led the duo with 15-kills and four aces and Roh was big with three blocks and 14-kills as well.

Howard and Quiggle posted a 21-18 first set win over Adlee Van Winden and Taylor Nelson on court two, before gritting out the second set with a hard-fought 29-27 set two win.  Howard dominated the offensive with a season-high 25-kills and five aces, while adding two blocks on the defensive end.  Quiggle posted seven kills as well.

Wilson and Kraft closed out the day with a 24-22, 21-17 victory on court four over Savannah Niemen and Anna Gorman.  Wilson amassed 16-kills in the second match of the day and added an ace, while Kraft dominated the net with four blocks and tabbed two aces and 11-kills.

Next, the Waves host No. 5 Hawai’i at Zuma Beach for a one-match dual onWednesday, March 29 with first serve set for 1 p.m.  Follow @WavesBeachVB for updates and check on PepperdineWaves.com for full results, recaps and more!