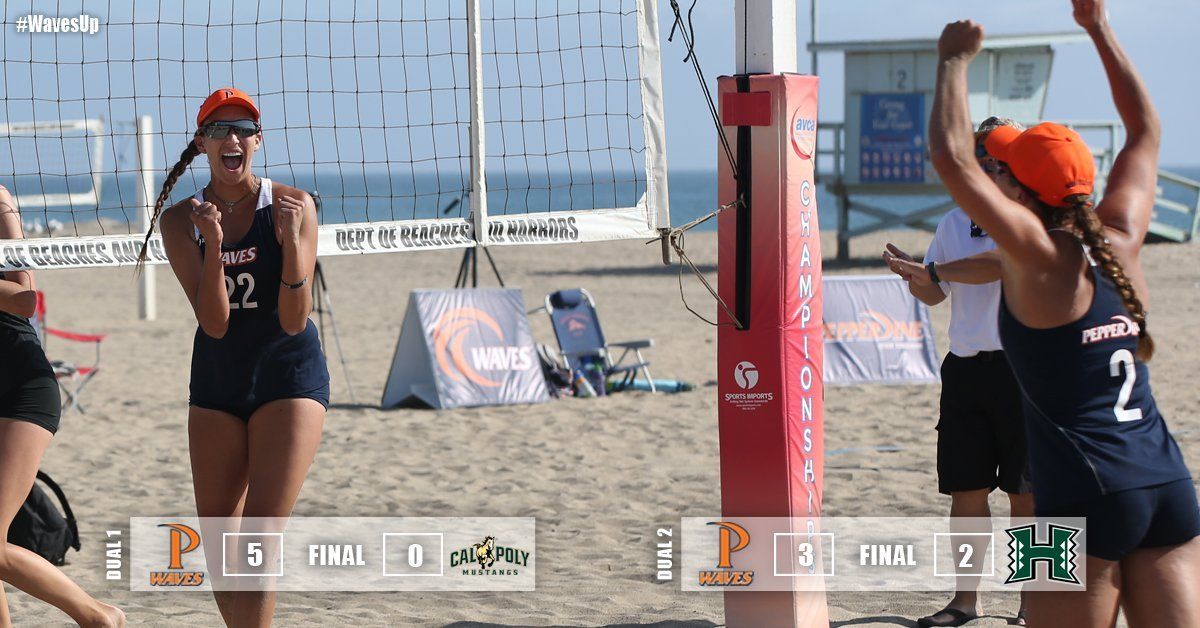 HONOLULU, Hawai’i – The 2nd-ranked Pepperdine beach volleyball team stretch its winning streak to 16-consecutive matches with victories over Cal Poly and 6th-ranked Hawai’i at the Ching Complex on Friday afternoon.

In the first match-up, the Waves won on all five courts, with the first four matches on courts two through five earned by straight-set victories and the win on one ending after a three-set battle.

Sophomore Anika Wilson (Santa Barbara, Calif./San Marcos HS) and freshman Deahna Kraft (Seattle, Wash./Garfield HS) then put the team in a position to clinch from the No. 4-slot, besting Brayden and Taylor Gruenewald with a 21-13, 21-17 final mark.

To start the second match, Pepperdine pulled ahead 2-0 early with wins on courts five and three, before the Rainbow Wahine amassed a victory on court four.  Then, the Waves No. 2-pair Quiggle and Howard clinched the match to make it 16-wins in a row for the Waves.

Bailey and Seiber took down Hannah Zalopaney and Amy Ozee with a 21-16, 21-17 final mark in the No. 5-position.  Dyer and Caputo then downed Emily Maglio and Laurel Weaver with a 21-14, 21-16 result to put the Waves in clinching territory once again.

Hawai’i then won the team’s first win of the day with a three-set battle on court four to make it 2-1 Waves and all eyes looking at the No. 1 and No. 2 positions.

Howard and Quiggle commanded the court against Nikki Taylor and Ka’iwi Schucht, amassing a 21-18, 21-16 final score to clinch the overall dual for the Waves.  Hawai’i finished the day by taking court one in two sets to make it a Waves 3-2 final victory.

Tomorrow, Pepperdine takes on both Cal Poly and No. 6 Hawai’i in another set of two matches at 4 and 7 p.m.  The back half of the 7 p.m. match will air live on OCSports.  Follow @WavesBeachVB for updates and check on PepperdineWaves.com for full results, recaps and more!