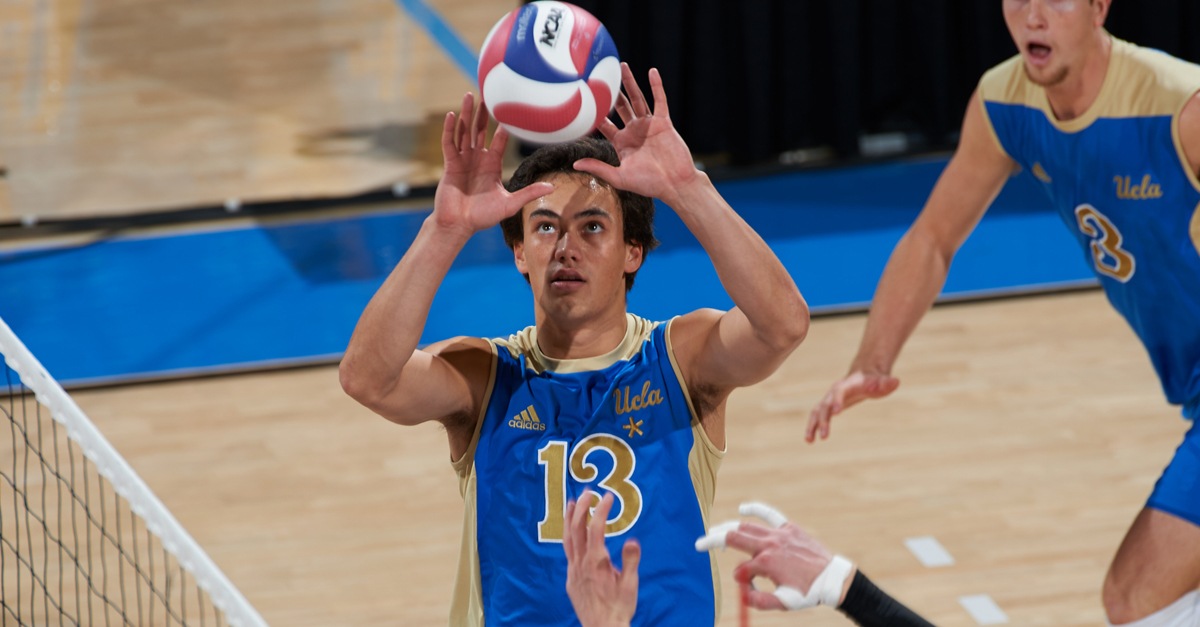 Coming Up— The No. 2-ranked Bruins (6-1, 4-0 in Mountain Pacific Sports Federation action) will host No. 11-ranked UC Santa... Current Photo via UCLA Athletics

Coming Up— The No. 2-ranked Bruins (6-1, 4-0 in Mountain Pacific Sports Federation action) will host No. 11-ranked UC Santa Barbara (6-1, 3-1) on Wednesday night at 7:30 p.m. in a match to be televised by the Pac-12 Networks. The two teams will then head to Santa Barbara for a match on Friday night in the Thunderdome at 7 p.m. The Bruins will close out the week with a non-league contest against Princeton on Sunday at 8 p.m. in Pauley.

Scouting the Opponent — UCSB has won three matches in a row and last week posted wins over Cal Baptist (3-0) and USC (3-2, 15-10 inthe fifth set) … The Gauchos’ lone loss came in fi ve sets at the hands of UC Irvine.

Coach Speraw: Year Five at UCLA — John Speraw (UCLA ’95), who is in his fifth season as the head coach at his alma mater, has captured three NCAA titles as a head coach (2012, 2009, 2007 at UCI), three as an assistant coach (1996, 1998, 2000 at UCLA) and two as a player (1993, 1995 at UCLA). Also the head coach of the U.S. Men’s National Volleyball Team, Speraw led that squad to the 2015 FIVB World Cup and automatic qualifi cation for the 2016 Olympic Games where his squad took home the Bronze medal. Speraw came back to UCLA after 10 seasons at UC Irvine where he led the Anteaters to three NCAA championships, and a 199-106 (.646) overall record. In winning that 2007 title, Speraw became the fi rst individual to produce a championship as a head coach, assistant coach and player in collegiate men’s volleyball history. He was named head coach of the U.S. Men’s National Team on Mar. 25, 2013. In the summer of 2014, he guided the U.S. team to a win over top-ranked Brazil in the FIVB World League gold-medal match. In the summer of 2012, he had served as an assistant coach for the National Team, which advanced to the quarterfi nals of the London Olympics. He was also an assistant on the gold medal winning U.S. squad in the 2008 Beijing Games. Speraw won the National Coach of the Year award in 2007.

Recapping the Last Three — Last Friday night, UCLA defeated USC 25-20, 23-25, 25-20, 25-22 before over 2,000 fans. Jake Arnitz became the fi rst Bruin of the season to crack the 20-kill mark and led the attack with 20 kills and a .450 hitting percentage. Arnitz’ 20 kill, one shy of his career high, set in a match last season against CSUN. He added four blocks and a season-best six digs. Daenan Gyiman had 10 kills (.444) and three blocks. Stahl, who had three aces, registered eight block assists and moved past Nick Vogel into sole possession of fourth place on the all-time UCLA block assist list (rally scoring era 2001-present) during the contest. He also moved past Jamie Difenbach into seventh place on the all-time school list for total blocks (now with 290). Jackson Bantle totaled 14 digs, one off of his career-best total. Hagen Smith had 24 set assists and seven digs. UCLA hit .309 for the match to .208 for the Trojans. UCLA out blocked USC 13.0 to 7.0.

UCLA swept UCSD 25-15, 25-13, 25-17. The Bruins hit .557 for the match and registered nine aces on the night, a school record-tying seven coming in the second set. Mitch Stahl and Ma’a led the way from the service line with four and three aces, respectively. Arnitz and Hatch tied for match-high kill honors with nine each.