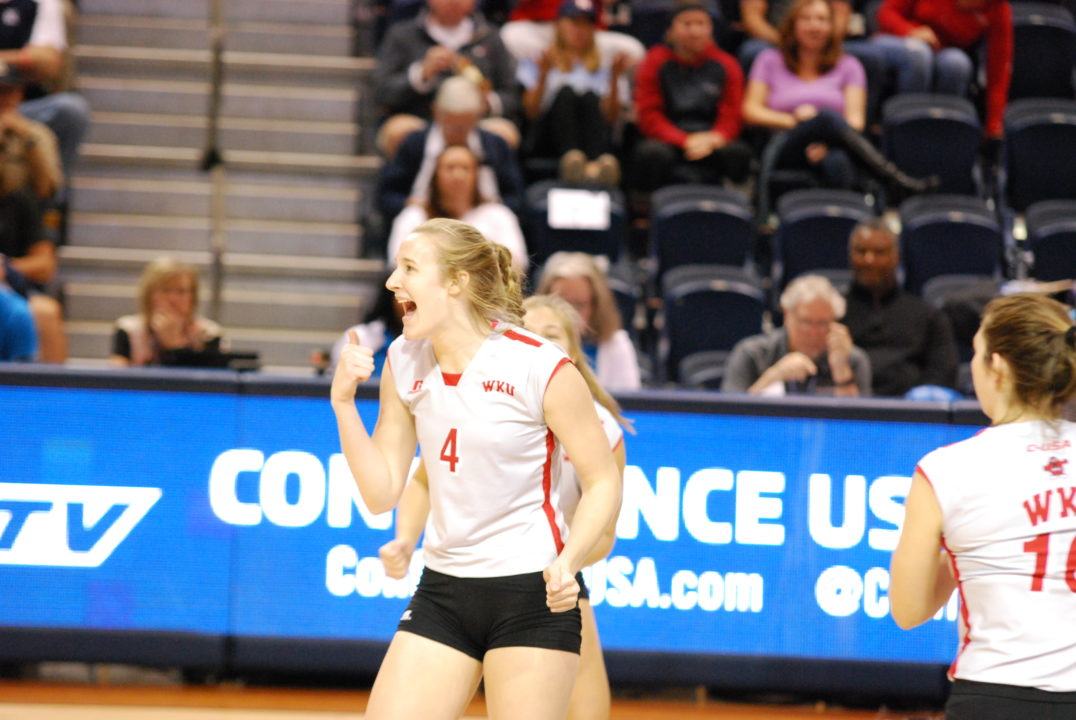 Rachel Anderson's 31 kills in Sunday's championship game ties her for the 18th-most by anybody in a 5-set game this season. Archive Photo via Janna Schulze/VolleyMob.com

Rice entered the tournament as the 6th seed, which made them the lowest-ranked team to ever qualify for the Conference USA Championship team. The conference’s only realistic chance of getting a 2nd team into the NCAA tournament would be a Rice win, though, and Western Kentucky earning an at-large bid as a result of an otherwise phenomenal season that has them as the 16th-highest RPI rated team in the country.

Buoyed by a home crowd, Rice jumped out to an early 7-3 lead, but a well-timed Western Kentucky time out put the Hilltoppers on a 5 point run, and eventually a 1st set win.

It looked like Western Kentucky might run away with the game in the 2nd set, where they controlled the run of play with a 25-20 win.

Rice, however, re-channeled their early success to win the 3rd and 4th sets. While Western Kentucky was hitting way higher, bigger, and harder than the Owls, Rice was very effective defensively, digging a lot of balls and playing especially well when the Hilltoppers tried to tipping it short, which they did frequently even with limited success. The Owls also picked up some big points going over on 2, and outside hitter Chelsey Harris placed the ball on open floor in key moments to keep the momentum going.

In the 5th set, though, it was all Hilltoppers. Anderson almost single-handedly willed her team to a win, at one point scoring 4 straight points overall (and 5 straight WKU points) on kills. Anderson had 6 kills in the final set and served WKU to 3 more points to play a major role in over half of their final-set points. Alyssa Cavanaugh, who leads the team in kills this season, chipped in 3 kills in the final set. She wound up tying her own career high with 24 kills – swinging aggressively all night for some big momentum-changing points, including the 1st and 3rd WKU points of the last set.