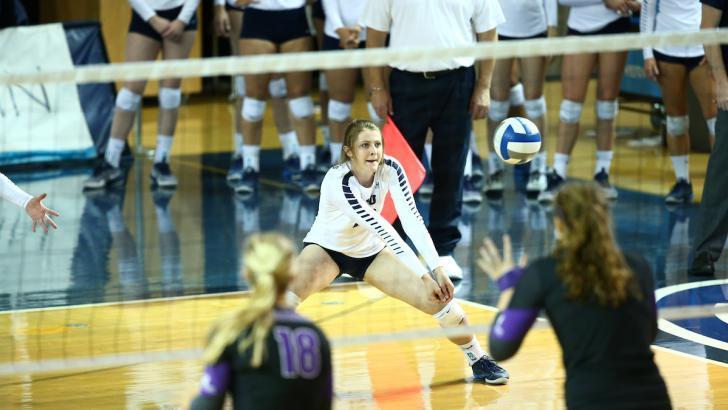 “I thought we played a great match,” BYU head coach Heather Olmstead said. “When it was tight in the third set our team showed some grit and wanted it. I’m really proud of the team effort today.”

Miller led the Cougars with 16 kills to go along with three digs. Mary Lake collected 26 digs while Lyndie Haddock had 40 assists and 14 digs. Lake’s 26 digs move her to 455 on the season, good to sixth-most all-time in a single season in BYU rally-scoring era history. Amy Boswell and Whitney Young Howard each led the team in blocks with six apiece and Boswell had 13 kills in the win.

BYU (26-3, 15-2 West Coast Conference) got the first point of the first set against Santa Clara (15-14, 6-11 WCC) with a block from Howard and Veronica Jones-Perry. The Cougars took a 6-3 lead on a Lacy Haddock kill and a Miller kill extended the lead to six at 11-5. A Howard kill kept BYU ahead 15-7, forcing a Bronco timeout. Another Miller kill made it 19-7, but Santa Clara scored the next four-straight points to cut the lead to eight, trailing 19-11. The Cougars rallied, however, to take the set 25-15 on Miller’s fifth kill of the set.

BYU took a 3-0 lead to start the second set after a pair of Miller kills and a Howard block. The Broncos stayed in the set, pulling ahead 9-7 after a 6-2 run. A Jones-Perry kill put the Cougars back on top at 12-11, but Santa Clara collected the next five points to take a 16-12 advantage. The Broncos maintained their lead from there, ending the set on a 7-0 run to win 25-15.
Santa Clara started the third set where it left off at the end of the second, taking a 5-1 advantage. A 4-0 BYU run ensued, with help from an ace by Lake, to knot the score at 5-5. Another 4-0 Cougar rally then put them ahead 9-7, but a 6-1 Bronco spurt gave the home team a 15-12 lead. A pair of Miller kills helped tie the set at 15-all, and a pair of Lacy Haddock kills put BYU up 19-17. A Boswell kill gave BYU set point up 24-22, but Santa Clara scored two-straight points to even things up. A Lyndie Haddock dump kill once again gave the Cougars set point and a Howard kill ended the set 26-24.

Howard scored BYU’s first two points of the fourth set with kills. Boswell later scored on a slide kill to help her team take a 6-3 advantage. A Miller kill extended the Cougar lead to six at 11-5 before a Howard kill put them up by double digits at 16-6. Another Boswell kill ended a 4-1 rally, extending the lead to 12 at 22-10. Lyndie Haddock then ended the set and match 25-12 with a kill.

BYU stays on the road next, facing Loyola Marymount on Tuesday, Nov. 22, at 8 p.m. PST. A win will give BYU at least a share of the WCC championship. The match will be broadcast live on ESPNU. Links to a video feed and live stats can be found on the BYU women’s volleyball schedule page.

SANTA CLARA, Calif. – Playing a ranked opponent for the second-straight match, Santa Clara volleyball fell to No. 10 BYU 25-15, 15-25, 26-24, 25-12 in Leavey Center on Saturday afternoon for its senior day match. The loss snapped a five-match home winning streak for the Broncos against the Cougars, and marks just the second time BYU has won in Leavey since the Cougars joined the West Coast Conference in 2011.

The Broncos carried momentum from their excellent second game into the start of the third and built a 5-1 lead, capped by back-to-back kills from Jensen Cunningham. The Cougars tied the score at 5-5 and from that point forward, neither team would lead by more than two points.

There were 11 ties in the third frame with the final one coming at 24-all. Lacy Haddock and Whitney Young Howard converted back-to-back kills to finish off the game in favor of the Cougars.

After the back-and-forth third game, BYU took control in the fourth, only trailing once. With the score 4-3, the Cougars rattled off 12 of the next 15 points to take a commanding 16-6 lead and all but put the match away.

The Cougars hit .250 as a team and McKenna Miller had a match-high 16 kills. Amy Boswell picked up 13 kills and Lyndie Haddock had 40 assists. Mary Lake had 26 digs to lead both teams.

After dominant first game by BYU and a quick 3-0 lead in the second for the Cougars, Santa Clara evened the game and built an 11-9 lead. After three-straight points from BYU, the Broncos came back to close out the set on a 14-3 run.

Santa Clara honored its five seniors prior to the contest: Madison Dutra, Katrina Inch, Mary Shepherd, Sabrina Clayton and Hess. They close out the 2016 regular season with a home tilt against Saint Mary’s Tuesday at 7 p.m.