The Pac-12 has announced the team and pairs brackets for the 2017 Beach Volleyball Championships.

No. 1 USC (30-0), which won the 2016 NCAA and Pac-12 titles, earned the top seed in the team bracket, which will be played April 27-29 at the Arizona Sand Volleyball Courts in Tucson. The team competition will be broadcast live on the Pac-12 Network beginning at noon ET and lasting through Friday’s team final.

No. 2 UCLA checks in as the second seed, while No. 8 Arizona fills the third position. Seeds four through nine are (in order): Arizona State, Stanford, California, Washington, Utah and Oregon.

The winner of the Utah/Oregon match will play No. 1 seed USC at 4 p.m.

The tournament also includes a contenders bracket, where teams have a chance to battle back for a chance at the title.

The pairs competition begins at 6 p.m. ET on Friday and features 18 duos.

In the pairs bracket, USC’s No. 1 pair, Kelly Claes and Sarah Hughes, the defending Pac-12 champs, earned the top seed. Claes and Hughes will face the winner of the opening match (No. 16 seed Campbell/Anderson of Cal vs. No. 17 seed Trueman/Choy of Utah).

No. 3 seed Arizona was the team runner up in 2016, while the Wildcats’ Madison and McKenna Witt finished second behind Claes and Hughes for the pairs title. The pair earned the No. 2 seed in this year’s bracket and will face the winner of the play in match featuring No. 15 seed Bark/Rodberg of Cal and No. 18 seed Agost/Raskie of Oregon. 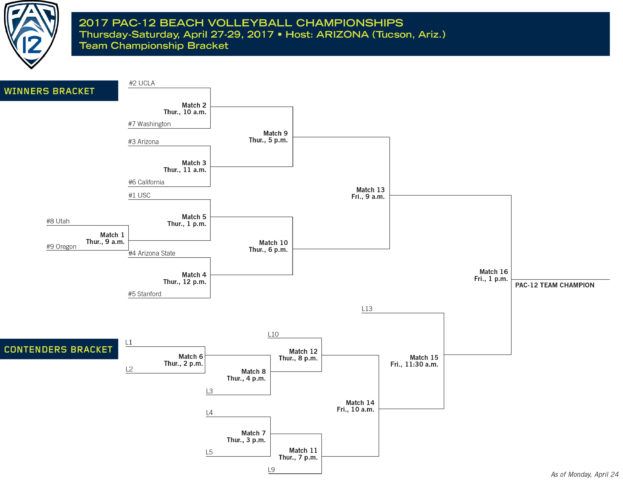