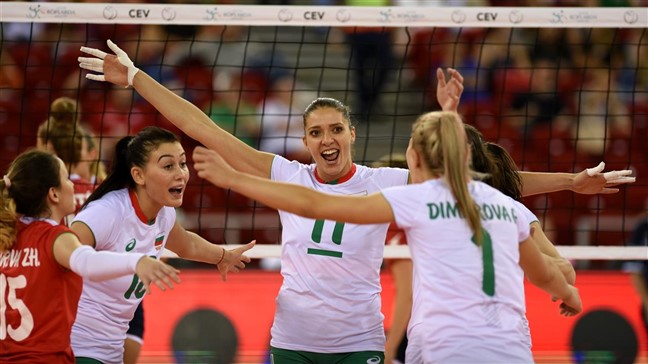 Bulgaria took down Hungary to win Gold to wrap up the 2018 CEV Women's European Volleyball League. Archive Photo via CEV

The final two matches of the Golden League wrap up today, although the pair of bids to the 2018 FIVB Women’s Challenger Cup have already been locked in. Still, gold, silver and bronze medals will be awarded to conclude the Golden League before stepping into the Silver League tomorrow, where teams can play their way into the Golden League for 2019.

Each of these teams already accomplished their main goal in qualifying for the 2018 FIVB Challenger Cup, but still a first-place trophy and gold medal was on the line. Bulgaria overcame the pro-Hungary crowd to finish of the event at 7-1 with a sweep of Hungary, who earned the Silver medal.

Hungary actually had the matches’ leading scorer in Reka Szedmak (12 points), but the other seven who tallied a point had just 23 points. Bulgaria saw Gergana Dimitrova (11 points) nearly match Szedmak but get more help from all-around as four others recorded seven or more points.

Although the Czech side lost for the first time in the tournament in the semifinals, they did salvage the end of their tournament with a bronze medal after downing Finland in the third-place match. It’s no bid to the Challenger Cup, but it’s a good finish to an event that can serve as a springboard to the future.

Neither team garnered much of an advantage in blocks, and both sides posted a barrage of aces (10 aces:2 serve errors for Finland versus 9 aces: 8 serve errors for Czech Republic). The difference was really the efficiency of Czech offense, as they posted 13 more kills and a 47% execution rate compared to 40% from Finland.

That offense was carried by a quartet of attackers for Czech Republic who had 13 or more points, mainly Michaela Mlejnkova (25 points) and Eva Hodanova (19 points). Finland had similar balance with four at 13 or more as well, but with Salla Karhu (17 points) leading the way it wasn’t enough for the outbursts of the dynamic Czech duo.