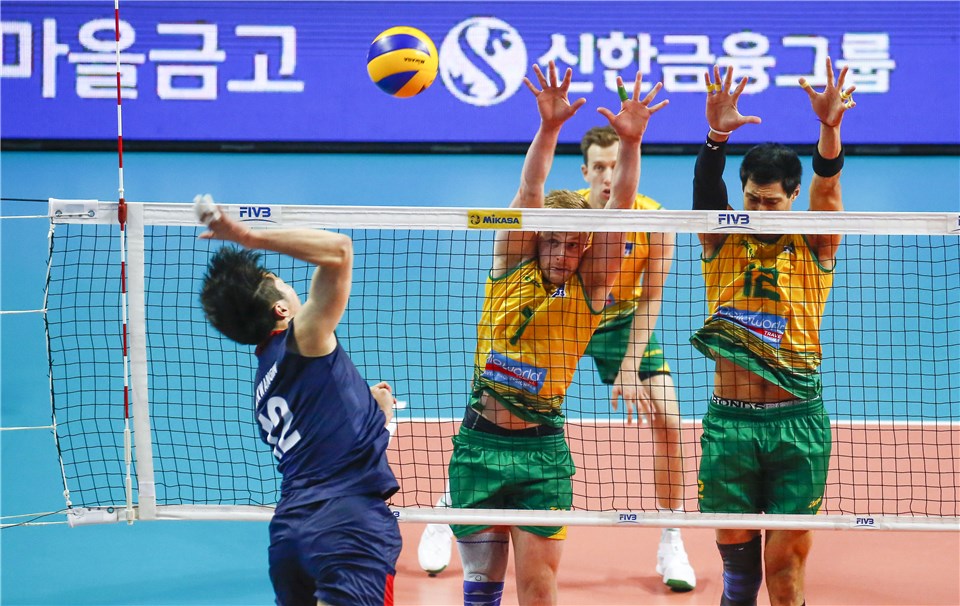 In what was Italy's 500th world level victory, the team rode a balanced scoring effort and strong net play to a four-set win over China to kick off VNL Week 4. Twelve blocks and 32 Korean miscues gifted Australia a four-set win on Friday. Current Photo via FIVB

In what was Italy’s 500th world level victory, the team rode a balanced scoring effort and strong net play to a four-set win over China to kick off VNL Week 4.

Chuan Jiang checked in with a match-high 19 points (16 kills, 2 blocks, 1 ace), while Libin Liu added 12 (10 kills, 2 blocks), but it was not enough. Longhai Chen and Shuhan Rao were next on the team with seven points apiece. Jingyin Zhang served up a team-best two aces among four points.

The loss was the fourth straight for the Chinese, who now stand at 2-8 in the tournament. Italy’s victory gets the team back on the winning track after falling to Japan in five sets to wrap Week 3. It also puts the country in elite company with only Brazil and Russia as nation’s to reach the 500-win milestone.

Italy coach Gianlorenzo Blengini Gianlorenzo: “I think we played well and I am satisfied with how my players performed. Especially we played very well from the first set. Our service and defence were good. However we started making mistakes from the third set. We missed five serves in a row in the beginning. Also our plays became easy to predict and China were able to adapt to our play and perform at their best.

“China are a really great team. Especially they tried to interact with other teams and they have grown a lot. As we made a lot of mistakes, especially while we were winning, we need to overcome these mistakes by putting in more effort.“

China captain Daoshuai Ji: “Congratulations to Team Italy. We did well in some parts of the match. Traditionally, we have not played well in the first set. However, as the game progressed, our team work improved. Italy were at a higher level. We learned something from them today.”

The Aussies won the block 12-4 and scored nine more points on errors (32-23), while Korea was better at the service line with a 5-3 lead in aces. Both teams managed 50 kills.

Paul Carroll was the top scorer, tallying 21 points for Australia on 20 kills and a block. Three other players chipped in double-digit scoring efforts: Nehemiah Mote (14), Luke Smith (13) and Jordan Richards (11). Smith put down 11 kills and added a block and an ace, while Mote chimed in with nine kills to go with three blocks and a team-high two aces. Richards was a star at the net with a team-high four blocks to go with his seven kills. Beau Graham scored just four points, but that included three blocks. Thomas Hodges sat the match out.

Kwang-In Jeon and Sung-Min Moon posted 13 and 12 points respectively for the Koreans. Jeon put down 13 kills, while Moon added 10 and a team-best two aces. Myung-Geun Song came in during Set 3 and finished off the match with eight points (7 kills, 1 ace), while Jiseok Jung also managed eight points, all on kills, while playing sparingly in Set 4.

With the loss, South Korea is mathematically eliminated from Final Six contention, having posted just one point with five matches remaining, trailing sixth place Italy (19) by more than the available 15 points left.

Australia coach Mark Lebedew: “I am happy with today’s performance. We have improved in each round. Every round, the weakest match was the first match, so we focused more on today’s match. It wasn’t perfect but because of our compact defense we were able to win this match.”

Australia captain Paul Carroll: “I was impressed with Korea’s playing style. They served well and got the first set with the support from their home fans. However, we dominated physically. We did well with the high balls and in blocking.”

Korea coach Kim Hochul: “At the beginning of the first set, we started as we expected. Our players played as much as they could. However from the second set our reception became a problem. Jung Jiseok and Kwak Seung-suk were the players who had the key to make the game flow, but the two players were not able to play as our team expected.

“Lots of teams have different strategies and as our team has weaknesses in the middle we tried to solve that with strong serves. But if one server missed a point it affected the next server. And that caused a lot of misses.”