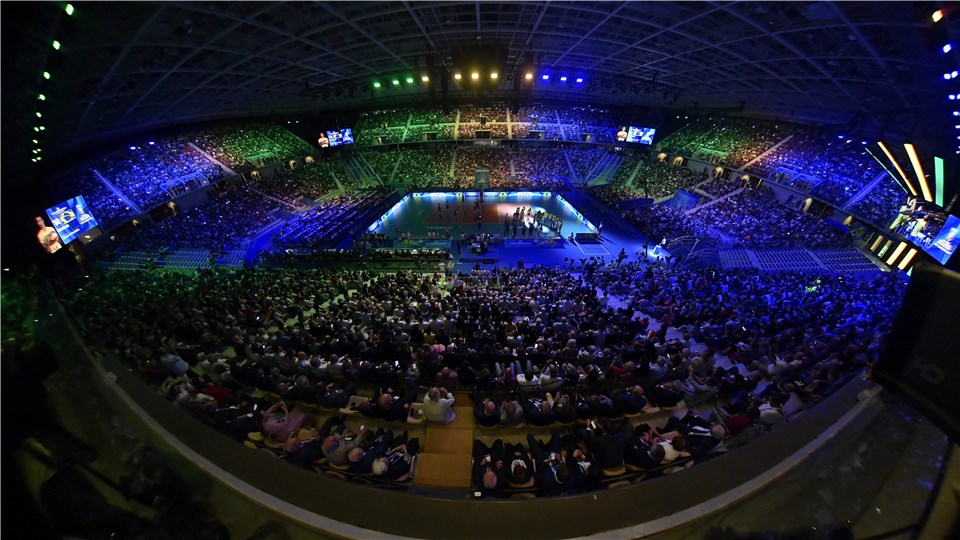 The Pala Apitour was pretty full for the championship match, but was still short of its listed capacity. Current Photo via FIVB

When French men’s volleyball national team head coach told Polish media last week that he believes every volleyball tournament should be played in Poland, maybe he wasn’t just feeding the local media some platitudes in exchange for a positive review of his team’s disappointing performance at the World Championships.

While the Final 6, semi-finials, and medal matches at the Pala Alpitour in Turin, Italy drew better crowds than the first three rounds, it was still well-below capacity. The average match there drew 10,869 fans, which is about 69% of the stadium’s 15,807 listed capacity (though, the multiple attendances of 12,011 implies that there was some artificial cap put on the facility short of its listed capacity).

Note: while the first two sections, representing Pool I and Pool J, were split for standings, they’re played in succession, with Pool I being the early match and Pool J being the late match each day.

In total, the 2018 World Championships, co-hosted by Italy and Bulgaria, drew 389,029 fans, or a full-tournament average of 4,139-per-match. In Poland four years ago, the tournament drew 563,263 fans, or 5,469-per-match. Even if you exclude the 61,500 special opening in the Warsaw National Football stadium, Poland still pulled in over 100,000-more-fans than did the Italy/Bulgaria combo. That equates to millions-of-dollars in revenue over the course of the tournament.

We looked at the average attendance-per-nation after the preliminary round (which was impacted by host teams). Now, after the full matches are completed, we can look at fans-per-country, with a new inflation based on those teams who advanced to the later rounds (where more fans naturally attend).