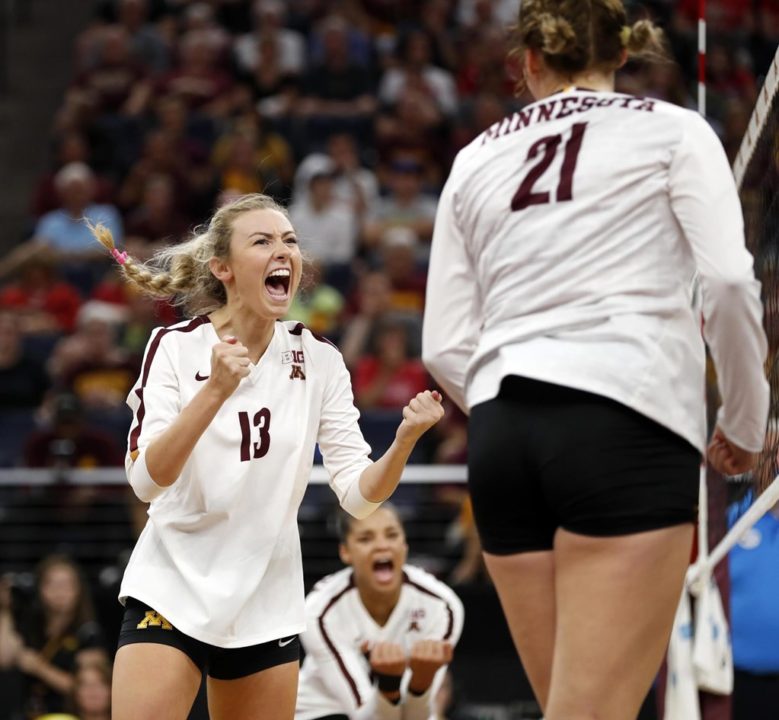 After leading No. 7 Minnesota past No. 3 Wisconsin and Indiana in sweeps, senior setter Samantha Seliger-Swenson has been selected as the VolleyMob Player of the Week.  Current Photo via Minnesota Athletics

After leading No. 7 Minnesota past No. 3 Wisconsin and Indiana in sweeps, senior setter Samantha Seliger-Swenson has been selected as the VolleyMob Player of the Week.

Seliger-Swenson averaged 12.5 assists and 3.5 digs per set, while leading the Gophers to a .371 clip. The senior notched 39 assists, eight digs and two aces, while leading the team to a .386 effort against the Badgers. The Minnetonka, Minnesota, native added 36 assists, 13 digs and led the team to a .356 efficiency against Indiana. The senior also surpassed the 1,000 dig milestone en route to Big Ten Setter of the Week honors.

Averaged 7.43 digs per set, while helping limit Indiana State and Evansville to a combined .163 hitting percentage; notched a career-best 35 digs against Indiana State on Friday; added 17 digs and three assists against Evansville on Saturday; Missouri Valley Defensive Player of the Week

Averaged 14.00 assists per set (98) and 3.43 digs per set (24), while adding six kills, four aces and a block. She had 55 assists and 14 digs in a four-set win over the Little Rock and tallied 43 assists and 10 digs in a sweep over the Arkansas State. Both assist totals were the most this season by a Sun Belt player in a three- and four-set match, respectively. DeWalt also quarterbacked a Texas State offense that finished with a cumulative .305 attack percentage; Sun Belt Setter and Co-Freshman of the Week

Averaged 7.00 kills and 5.00 digs per set, while hitting .378 in a sweep of Delaware; posted a three-set rally scoring record with 21 kills to go with 15 digs and two aces; made good on 13 of 14 reception chances. CAA Offensive Player of the Week