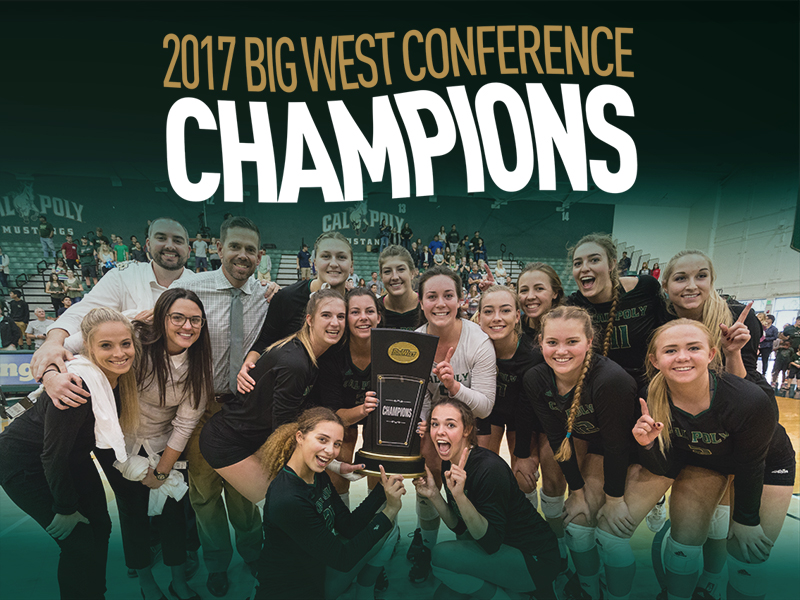 Cal Poly made just eight hitting errors on the night, hitting at a stellar .373 clip, and serving up eight aces en route to a sweep of UC Irvine, the Big West title and a 2017 NCAA Tournament berth.  Current Photo via Cal Poly Athletics

SAN LUIS OBISPO, Calif. – Cal Poly made just eight hitting errors on the night, hitting at a stellar .373 clip, and serving up eight aces en route to a sweep of UC Irvine, the Big West title and a 2017 NCAA Tournament berth.

The league title, the NCAA appearance and an 8-0 home record are firsts for the team since 2007.

UC Irvine got double-digit kill talies from junior outside Haley DeSales (11) and sophomore middle Makayla Wolfe (10), with each hitting .368 or better for the match. Wolfe also notched a team-leading four blocks, including three solo efforts, while DeSales just missed a double-double, tallying a team-best nine digs.

Cal Poly had an error free first set, hitting .500 with 11 kills in 22 swings, while UCI hit .000 with nine kills and nine errors. The Mustangs led 11-5 after three kills each by Mercer and Van Winden and four Anteater miscues. Cal Poly stretched the margin to nine at 18-9 with a trio of blocks, two by Mercer. The Mustangs closed out the set on a 6-0 run, including two aces by Jessica McRoskey.

The Mustangs remained efficient in Set 2, hitting .464, while the Anteaters upped their game with a .400 effort. UCI took an early three point lead at 8-5 as five different players notched kills. Cal Poly tied it up three times, last at 10. Later, down 17-13 after three straight kills by DeSales, the Mustangs rallied for a 19-all tie with two kills each by Adlee and Torrey Van Winden. A Wolfe kill made it 20-19 Anteaters, but Cal Poly scored six straight to steal away the win. Torrey Wan Winden notched two kills and Niemen wrapped the stanza with back-to-back aces.

Cal Poly hit just .160 in the final stanza, but it was enough to edge past UCI, which hit just .042 with seven errors. The Mustangs led 11-6 with help from four Irvine miscues, two Greisen kills and two Nelson aces. The Anteaters cut the margin to four at 13-9, but would get no closer. Cal Poly scored four straight to go up eight at 17-9. Later, leading 19-13, the Mustangs scored four in a row with three UCI errors and an ace by Katherine Brouker, to make it 23-13. A service error gave Cal Poly a match point try, and a Niemen putaway clinched the sweep two points later.

In front of the home crowd on senior day at Mott Athletics Center Saturday, the Cal Poly volleyball team swept UC Irvine (25-11, 25-20, 25-16) to win the Big West Conference Championship and secure a spot in the NCAA Tournament.

As a team, Cal Poly had eight service aces and six blocks and outhit the Anteaters (21-6, 9-5) in each of the three sets.

Following the ceremony to honor the three seniors, the Mustangs came out firing in the first set. They got out to a 11-5 lead and would have a lead as much as nine before finishing the set on a 6-0 run to win 25-11. Cal Poly hit .500 in the first set.

The second set would prove to be much closer. The teams traded points for the first half of the set. Tied at 10, UC Irvine would go on 7-3 run. The Mustangs would then go on a 5-1 run of their own to tie it at 18. Tied at 20, Cal Poly scored five straight points to win the set 25-20.

Up 8-6 in the third, the Mustangs would go on a 9-3 run to take a 17-9 lead and would not look back from there. They went on to win the set 25-16 to finish off the Anteaters and win the Big West Conference.

At 24-2 this is now the best season in program history.

“I’m so proud of this group,” head coach Sam Crosson said. “I’m proud of the seniors and how they and the rest of the team has represented themselves. I couldn’t be happier for them and how hard they’ve worked to earn the conference title.”

“It’s another step in the continued growth of the program,” Crosson said. “It’s a lot of mixed emotions. I’m very grateful and thankful to have great coaches that have helped so much.”

Once that is over, the Mustangs will wait and see where they will be placed in the NCAA Tournament. The selection show is on Sunday, November 26 at 6 p.m. PST on ESPNU. Cal Poly will be hosting a watch party at Milestone Tavern in San Luis Obispo from 5:30-7:00 p.m. All fans are invited to attend.

“We’re going to get back and the gym next week and continue to work to win these next two games and stay focused to try to win in the NCAA Tournament.”

The Anteaters drop their second consecutive match and go to 21-6 on the year and 9-5 in the Big West. The Mustangs claim the 2017 Big West regular season title as they improve to 24-2 overall and 14-0 in the Big West.

Outside hitter Haley DeSales led the team with 11 kills and nine digs, while middle blocker Makayla Wolfe had 10 kills and four total blocks. 13 Anteaters saw action against the Mustangs.

Cal Poly started quickly, scoring the first three points of the first set. The Mustangs scored four straight to open an 18-9 lead on the way to taking the set 25-11.

Three consecutive kills by Haley DeSales moved UCI in front 17-13 in the second set. The Mustangs would go on to out-score the Anteaters 12-3 to win the set 25-20. Cal Poly scored the final six points of the set.