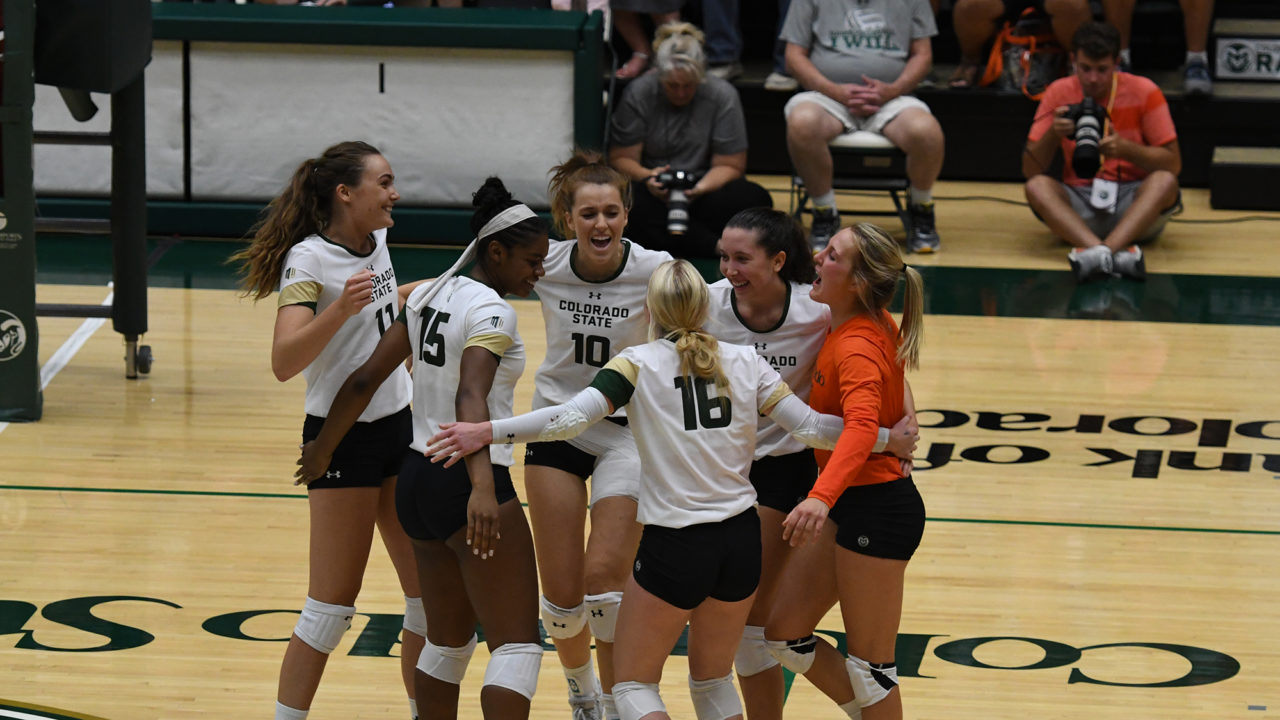 In their Big West opener, the Colorado State Rams hit .337 as a team on their way to a straight-set triumph over visiting New Mexico. Archive Photo via Colorado State Athletics

The #21-ranked Rams opened Mountain West action with a straight-set sweep of the New Mexico Lobos in a match that saw Colorado State’s senior outside Jasmine Hanna record the 1,000th kill of her career.

Hanna notched 15 kills against the Lobos, moving her to within 59 of Colorado State’s all-time kills leader in the rally scoring era, Megan Plourde (2008-2012).

The Rams were also led offensively by freshman outside Breana Runnels, who tallied 11 kills and hit at a .450 clip, while sophomore setter Katie Oleksak recorded 42 assists and sophomore Amanda Young served three aces.

New Mexico was strong at the net, recording nine blocks for the third time this season, including four each by junior middles Victoria Spragg and Mariessa Carrasco. Offensively, sophomore outside Lauren Twitty had a team-high 14 kills.

In the first set, the Rams came out strong, leading 8-2 early on their way to a 25-20 opening frame triumph. The Lobos led 13-10 in the second before a 5-0 Colorado State run gave the Rams a lead they would never relinquish, eventually claiming the set 25-18.

New Mexico led early again in the third before the Rams answered with a 13-4 run that allowed the home team to take control of the set and win the night in straight sets.

“This was a good match,” said Colorado State head coach Tom Hilbert, “I didn’t like the fact that we got blocked nine times and I think that is uncharacteristic of us in some of those situations, but we did kill a lot of balls tonight. We are over 50 percent every time we swung at a ball and that is outstanding.”

BOOM! @breana_runnels with a huge kill forces New Mexico to take a timeout. We lead, 15-9 in the third. #PointRams pic.twitter.com/E8Ch1nMTYw

FORT COLLINS, Colo. – Senior Jasmine Hanna paced the No. 23 Colorado State volleyball team with 15 kills in its conference opener against New Mexico, while hitting 1,000 career kills milestone. The Rams picked up a sweep against the Lobos in Moby Arena. Hanna now sits at 1,007 career kills and is 59 behind leader Megan Plourde (2008-12) in the modern scoring format.

The Rams outhit the Lobos with a .337 mark – led by Hanna who had 15 kills, while hitting at a .379 clip. Breana Runnels added 11 kills and also was efficient with a .450 hitting percentage. Katie Oleksak dished out 42 assists to prime the offense and Paulina Hougaard-Jensen led the defense with four blocks. Amanda Young was tough to receive from as she dropped in three service aces.

Colorado State start the match dominating the first set, as it gained control and kept it – while hitting a match-high .355 mark. The Lobos looked to find some rhythm in set two as they led 13-10 at one point, but the Rams would go on to win the next five points and gain a two-point lead. New Mexico would get within a point at 16-15, but that is all the closer it would get as CSU took the set, 25-18. The final frame had a match-high three lead changes as both teams battled early to take the lead. UNM led at 7-6, but the Rams again put together a six-point run to take a 12-7 advantage – one they wouldn’t part with. The Lobos came within three points at 19-16, but CSU finished the match off with a 25-20 victory.

The Rams will stay in Moby Arena this weekend and host UNLV on Saturday starting at 1 p.m.

IN THEIR WORDS
Tom Hilbert on the sweep in the conference opener…
“This was a good match. I didn’t like the fact that we got blocked nine times and I think that is uncharacteristic of us in some of those situations, but we did kill a lot of balls tonight. We are over 50 percent every time we swung at a ball and that is outstanding. I think it is a testament to our outside hitters since they took the most swings tonight. I also thought that Katie Oleksak did a nice job with tempo and doing the things she needed to do. It was also one of the best service receives matches we’ve had too. It was very consistent.”

Kirstie Hillyer on coming back from injury and playing…
It was super important to be back. I worked my butt off so I could be back for conference and having the team play so well tonight was really awesome. I wanted to be there for my team as soon as possible so I was I was super excited about that.”

Jasmine Hanna on playing well and finding herself in a comfortable rhythm…
“I think it has been a lot of communication between (Katie Oleksak) and I. We’re still figuring out some kinks and stuff, but she is doing a great job. Our serve receive is doing a great job, our defense is getting her balls and she is able to set me nice hittable balls that give me a lot of options. So, it the whole team helping me out.”

Tom Hilbert on Hanna reaching 1,000 career kills…
It’s terrific. It gives her a milestone that not very many players have reached.

FORT COLLINS, Colo. — Lauren Twitty tallied 14 kills and the Lobos finished with an advantage blocking, but it wasn’t enough as the University of New Mexico volleyball team dropped its Mountain West opener 3-0 to No. 23 Colorado State.

“I think there were things that were really good,” UNM coach Jeff Nelson said. “I thought Lauren played really well. I thought we attacked from the right side of the court really well.

“The things we do well, though, we didn’t do well. We didn’t pass well and we didn’t play good defense.”

Despite Twitty’s offensive performance and the Lobos’ showing at the net, New Mexico struggled against the Rams’ setter and their varied offense, finishing with just 21 digs. It’s the the team’s lowest dig total this season.

However, the Lobos logged nine blocks to CSU’s seven, just the third time Colorado State has been out-blocked this season. The nine blocks also tie the team’s season high, set twice before.

“We’ve been working on blocking for two weeks and we blocked pretty well,” Nelson said. “We had nine blocks in three games against a really good team.”

Ashley Kelsey, who started at outside hitter and moved to libero after intermission, tallied three errorless kills and seven digs.

Colorado State surged to an 8-2 lead to start the match, forcing a quick New Mexico timeout. The Lobos would close the gap to three points at 10-7, but the Rams rebuilt their lead with a 5-1 run. UNM would stay within five points for most of the remainder of the set, eventually falling 25-20.

New Mexico came out with some more urgency in set two, battling to an 11-8 advantage. The Lobos would hold that three-point margin to 13-10, but, after successfully winning a challenge on a touch call, the Rams would post a 5-0 run to claim the lead at 15-13.

CSU would not relinquish the lead in the second stanza, effectively closing the set on a 15-5 run. UNM did not score consecutive points after winning the challenge at 13-10.

However, CSU would maintain its lead in the waning moments of the set, winning it 25-20.