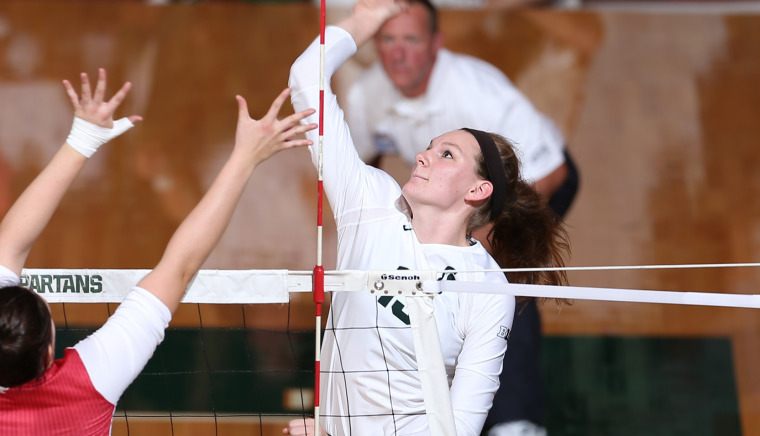 #21 Michigan State cruised to a straight-set victory over the Texas A&M-Corpus Christi Islanders to win the Spartan Invitational without dropping a single set, earlier sweeping matches against San Diego State and Marshall. Spartan opposite Brooke Kranda was named tournament MVP.

Senior Autumn Bailey was unstoppable against the Islanders, recording 16 kills on 29 swings and no errors for a .552 hitting percentage. Senior Alyssa Garvelink added 10 kills and hit .692. In a slight departure from this season’s typical all-senior starting lineup, sophomore setter Maggie Midgette got the nod for Michigan State over senior All-American Rachel Minarick.

Bailey and Garvelink paced the Michigan State offense in set one, notching six kills apiece on error-free hitting. In the second, the Spartans’ offense kept the pressure on, hitting at a .654 clip. The Islanders managed to keep it closer in the third, getting within three on a Nicholson kill to make it 19-16, but they got no closer and the match ended when Midgette’s 38th assist led to another Bailey kill.

Michigan State heads to Gainesville, Florida next weekend for Florida Active Ankle Challenge, which will include a much-anticipated battle with the #3 Florida Gators.

In the Saturday night match, Bailey led the way with 16 kills on 29 swings, hitting .442 and adding eight digs. Garvelink hit .692 (10-1-13) and added three blocks, sharing the match high with Kranda; the 6-6 redshirt senior had nine kills and three aces as well.

For Corpus Christi, the Islanders had three players finish with six kills each (Brittany Gilpin, Madeleine Doud, and Kristyn Nicholson). Nicholson was the Islanders’ representative on the All-Tournament Team.

Corpus Christi followed up a .258 hitting percentage in the opening set with a .348 performance in the second – but MSU countered with .441 in the first and .654 in the second, including a 17-kill, zero-error effort in the second frame. In the third, MSU held the Islanders to .083, but TAMCC still hit .211 for the match – the highest hitting percentage of any opponent this season. MSU, however, hit a season-best .432. The Spartans did have season lows in both aces (5) and blocks (6).

Sophomore setter Maggie Midgette got her first start of the season, compiling 38 assists, sven digs, two blocks, and three kills in leading MSU to its top hitting performance of the season. Libero Abby Monson had 16 digs and five assists.

The All-Tournament team consisted of the following players:

QUOTABLE
“It was probably our best performance in that I really saw our players working on improving in all the areas that we had identified from last weekend. Autumn Bailey didn’t have a single error all weekend, and was a force both offensively and defensively. I liked that we were able to see what Maggie Midgette could do in her first start of the season, too – it’s important for us to develop the depth that will help us through the grind of a Big Ten season, and we were able to work in a lot of our young players this weekend. All in all, I think there’s a lot to grow on as we get ready for the second half of our non-conference schedule.”
– Head Coach Cathy George

Brittany Gilpin, Madeleine Doud and Kristyn Nicholson all recorded six kills to lead the Islanders (2-4), but the balanced effort was not enough to keep pace with the en fuego Spartans. Autumn Bailey led the Spartans with 16 kills while hitting .552. Alyssa Garvelink added another 10 kills as the nationally-ranked Spartans pulled away.

Nicholson proved to be the Islanders’ most efficient option in attack as the setter floored six of her nine attempts to hit .556. Nicholson also added 24 assists in the loss.

After trading points early, the Spartans used a quick 5-2 run to build a 14-10 advantage in the opening set. The Islanders would answer with a 3-0 run to close within 17-15, but Michigan State held off the late charge for the 25-20 first set.

In the second, a 9-2 start for Michigan State allowed the Spartans to cruise to a 25-11 victory. The third once again opened with points traded back and forth, before the Spartans were able to pull away in the middle of the set.

After spending the past 10 days on the road, Corpus Christi returns home for the first time in 2017 on Tuesday night. The Islanders host rival UTRGV in the South Texas Showdown at 6:30 p.m.

The first 200 fans will receive a free T-shirt and all fans will have an opportunity to take their picture with the South Texas Showdown Trophy as the Islanders celebrate their victory in 2016-17.

Tickets to Tuesday’s match are just $6 and can be purchase online or by calling 825-BALL (2255). All Texas A&M-Corpus Christi students receive free admission to athletic events with a valid SandDollar$ ID.