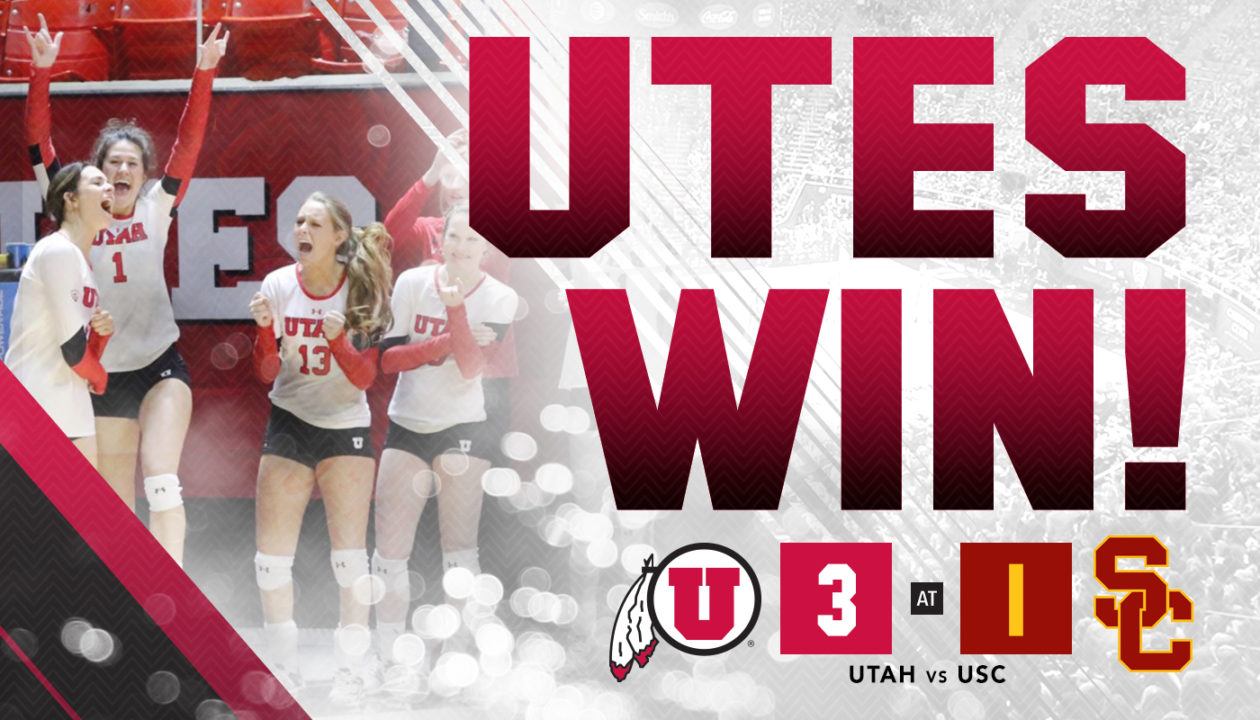 The #21 Utah Utes are having a magical season, and Friday night marked their 5th road-win over a ranked team this season – a new program record. It also stands as the Utes’ first win at the Galen Center since 1986, long before they were members of the Pac-12.

While Utah is 0-3 at home this season against ranked opponents, they’ve been nearly-unbeatable on the road. Their 5 road wins against ranked teams don’t include an early-season victory over Missouri, who wasn’t ranked at the time but is now at the top of the SEC standings.

Utah will have a chance to get a 6th win on Saturday when they face UCLA to finish their Los Angeles double.

The Trojans were led by 25 kills on .396 hitting from Adora Anae. That’s the 6th time this season that she’s had 25-or-more kills. This time, however, she coupled it with a season-high 25 kills.

Anae leads the Pac-12 in both total kills and kills-per-set this season, with 4.58/set so far. That also puts her 10th nationally.

The first set was a wild affair that went all the way to 32 before USC sealed it – Anae had 10 kills in that set, but also gave the Trojans 2 of their last 3 points on hitting errors.

The second set, however, was all Utes. USC scored the first 2 points, Utah fought back to tie the set up at 5, but Utah won 16 of the last 19 points in the set, including 6 straight on Berkeley Oblad serves with 2 aces, to even the game.

In the final set, another extra-pointer, Anae scored the last 3 Utah points to give them a 28-26 win in the set, and the game.

USC’s top scorer offensively was Khalia Lanier, who had 18 kills but hit just .175. Elise Ruddins chipped in 6 blocks and 6 kills.

Junior Adora Anae guided Utah to just its second win over USC on the road with a match-high 25 kills, while also matching a career-high with 25 digs. For Utah, it was the program’s first win over the Trojans on the road since joining the Pac-12 Conference and it marked the first win at the Galen Center since 1986.

The Utes trailed by as many as seven points, down 19-12 late in the first set, but a 13-5 run helped Utah retake the lead 25-24. Both teams would trade points back-and-forth, but the marathon-period went to the Trojans, 32-20. Anae registered 10 kills in the set, which included her recording the 1,174th kill of her career and moving into Utah’s all-time top-10 career list, but it wasn’t enough and the Trojans took a 1-0 lead into the second set.

The Utah defense limited the Trojans to just a .070 hitting percentage, while taking the third set 25-20. The Utes tallied another 14 kills on .333 hitting and were led by Anae’s six kills in the frame. Utah opened the frame with a 5-0 run and never looked back, leading by as many as nine points (22-13) late in the frame before USC mounted a small comeback. The Trojans would go on a 5-0 run late in the frame, but Anae put the set away with a kill and gave Utah a 2-1 lead in the match.

In a fourth set that went back-and-forth for the majority of the frame, Utah managed to dig deep when they needed it most and came away with a 28-26 win to take both the frame and the match. USC bettered the Utes in both kills (19-17) and hitting percentage (.302-.258), but three service aces and six total blocks helped guide the Utes to the win.

Utah pushed its lead to 20-16 following a block from junior Tawnee Luafalemana, but USC stormed back with an 8-2 run to take a 24-22 lead and that led to a Utah timeout. Anae followed with a kill and freshman Brianna Doehrmann registered consecutive aces to put Utah back in the lead 25-24. USC called a timeout and came out of the break with back-to-back points to reclaim the lead 26-25. Anae would go onto post three straight kills to give Utah the set (28-26) and the match.

Junior Carly Trueman notched her third straight double-digit kill effort with 14 kills on Friday. Junior Eliza Katoa was a kill shy of notching double-digits, but finished the match with nine kills an a team-best .444 hitting percentage.

Sophomore Jessie Openshaw led the offense with 27 assists and freshman Bailey Choy added 26 assists on the night. Doehrmann posted her third straight 10-plus dig effort, posting 14 digs in the match.

Junior Berkeley Oblad tied a career-high with eight total blocks, while both Luafalemana and Katoa added six blocks each. Utah finished the match with 15.0 total team blocks, marking the just the 15.0 or more block effort for the squad this season.

Oblad led the Utes with a career-high four service aces and the Utes finished the evening with a season-high nine aces as a team. Utah has registered 17 service aces in its previous two matches, which surpasses the 15 aces that were recorded in the five matches before that.

Utah wraps up play in SoCal tomorrow (Saturday) taking on No. 12 UCLA. First serve is set for 8 p.m. PT at Pauley Pavilion.