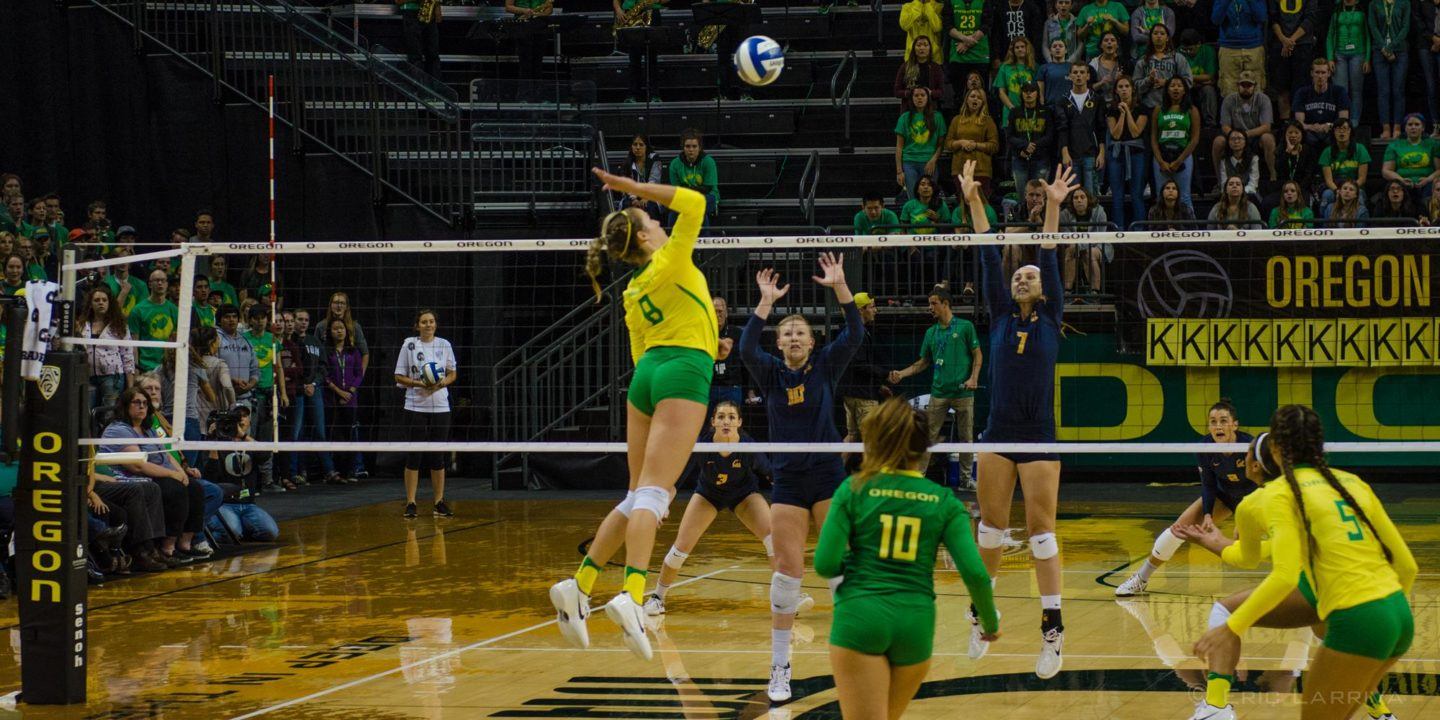 A massive night from 6’3″ sophomore outside hitter Lindsey Vander Weide led #24 Oregon to a 3-0 sweep in front of 2,700 fans on Friday evening.

She launched the Ducks to a dominant victory thanks to 25 kills in just 3 sets. Combined with 3 errors on 42 attacks, that came out to a whopping .524 personal hitting average, combined with 15 digs defensively.

“Yeah, that was definitely fun,” Vander Weide said of her night. “I obviously like swinging a lot as you could see tonight with all those kills, but I thought we played really well as a team and that’s why I got those kills.

“I felt like my vision was better tonight, so I was able to see the block a lot better, which helped me to hit around it and over it and that helped to get me to where I was.”

Cal got kills from 8 different players on the match, but only one made it to double figures – Jenelle Jordan, who hit .308 overall.

How It Happened: Vander Weide carried the Ducks (9-2, 2-0 Pac-12) from start to finish, tying her career-high with 25 kills (.524) while adding 15 digs to record her fifth double-double of the season. The sophomore from Turlock, Calif. led the Ducks to their ninth straight match win, and fifth straight sweep. Oregon outlasted California (6-6, 0-2 Pac-12) in a tough first set, before opening things up in the next two en route to the sweep. While Vander Weide led the offense, senior libero Amanda Benson paced the defense with 20 digs, her fifth match this year with 20-plus digs and second in a row. Taylor Agost and Willow Johnson added six kills each, Ronika Stone had five kills and three blocks and Maggie Scott dished out a team-high 26 assists, with August Raskie adding 22.

Set 1: California started the match strong, jumping out to a 4-1 lead, but the Ducks quickly responded with an 11-4 run to force a Golden Bears timeout, leading 12-8. Vander Weide was dominant during the Oregon run, putting down five kills to fuel the Ducks. Out of the timeout, Stone and Van Sickle began to take over for Oregon, carrying the Ducks to a 20-15 lead and another California timeout. The Golden Bears caught fire out of the second break, pulling within 21-20 after a 5-1 run. Head coach Jim Mooreregrouped his club during a timeout, and the Ducks scored four of the final five points to take the set. Vander Weide led all players with eight kills, while Benson dug 10 balls in the opening set for the second straight night.

Set 2: The Ducks dominated the majority of the second set, with Vander Weide leading the attack with nine kills on 11 swings, while also digging seven balls to give her a double-double at the intermission. Oregon jumped on the Golden Bears for a 20-10 lead to take control. The Golden Bears responded with a 6-3 run to force a Ducks timeout, but Vander Weide got the Ducks back on track with yet another kill and Jolie Rasmussen ended the set with a kill. Following Vander Weide’s lead, Agost put down four kills and Scott added an ace. The Ducks committed just two attack errors while hitting .472 in the second set.

Set 3: Oregon did not slow down out of the intermission, and neither did Vander Weide. The Ducks jumped out to a 16-6 lead, paced by five Vander Weide kills. California regrouped midway through the set to draw close at 22-19, but Vander Weide got the Ducks back on track with her career-high-tying 25th kill en route to three straight points and a 25-19 win. Vander Weide finished the set with eight kills, while Benson dug six balls and three other Ducks pitched in with a trio of kills.

Ducks Ride the LVW Bus: From her first kill of the night, it was clear that Vander Weide was locked in and primed for a big match. The 2015 All-Pac-12 selection led all players in kills in each of the three sets (8-9-8), and her 25 kills are the most in the Pac-12 this season in a three-set match. Vander Weide committed just three attack errors all night, with the first not coming until midway through the final game. She was second on the team to Benson with 15 digs, extending her team-lead in double-doubles to five. Vander Weide’s huge night pushed her season hitting percentage to .316, and her 3.28 kills per set and 118 total kills are tops on the club.

The Streak: With its ninth straight win and fifth straight sweep, Oregon has now won 18 consecutive sets and 27 of its last 28. During that stretch, the Ducks have hit .356 while holding their opponents to a hitting percentage of .129. Oregon has hit better than .300 in eight of the nine wins, while hitting .298 against UC Davis, and has held its opponents under .200 in each match. Vander Weide has hit .343 with 3.21 kills per set, Rasmussen has led the team with 3.23 kills per set and Agost and Stone have each hit better than .440.

Quotes:
Jim Moore, Head Coach
On the win…
“This is about as angry as I’ve ever been after a win. I’m really disappointed in the way we came out and in the execution. Our focus was not good from the beginning and that’s really disappointing to me.”

On Lindsey Vander Weide‘s performance…
“Obviously she was awesome tonight. Again, I would like to see the consistency rather than someone do it all themselves. I’m disappointed in the setting. In the third set we just decided we were going to set Lindsey and we don’t do that.”

Lindsey Vander Weide, Sophomore
On her big night…
“Yeah, that was definitely fun. I obviously like swinging a lot as you could see tonight with all those kills, but I thought we played really well as a team and that’s why I got those kills.”

On how she was able to have such a big performance tonight…
“I felt like my vision was better tonight, so I was able to see the block a lot better, which helped me to hit around it and over it and that helped to get me to where I was.”

Up Next: The Ducks will get their first taste of road conference play next week when they head to Arizona for a pair of matches against Arizona and Arizona State. Oregon will take on the Sun Devils in Phoenix on Friday at 7 p.m. PT, and then will turn around and face the Wildcats in Tuscon at 1 p.m. PT on Saturday.