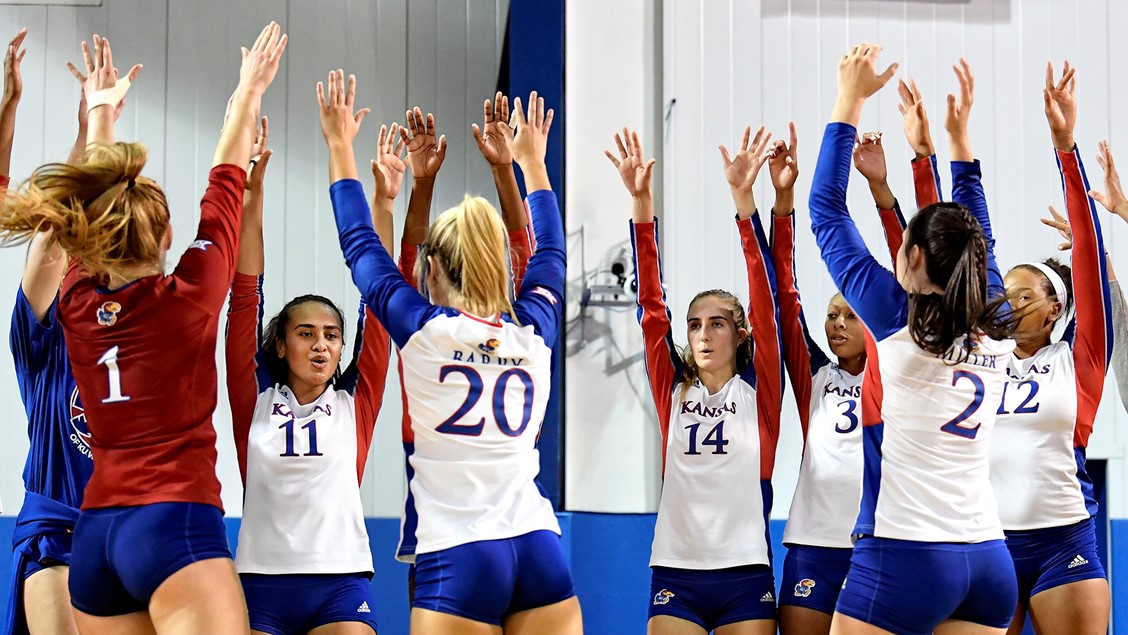 Only 5 teams in the NCAA era have run through an entire Division I women’s volleyball season without a loss. Last season, the suspense ended early. Nebraska lost its first game on October 1st at home against Ohio State, just over a month into the season, after a 12-0 start. With that defeat to the Buckeyes, who have had Nebraska’s number over the last few seasons, the last unbeaten fell.

This year, after two weeks of play, there are still 29 NCAA teams unbeaten, ranging in records from 3-0 (Brown, Yale, Northern Kentucky) to 7-0 (Kansas). Absent from that list of 29 is the Nebraska Cornhuskers, who have a much younger team this season and lost their first two matches of 2017 to Oregon (score: 3-1) and Florida (score: 3-2). Florida ranks #1 and Oregon #10 in the current VolleyMob top 25 poll, and Nebraska played the opening weekend without their starting setter Kelly Hunter, who was injured.

The Jayhawks cleared a challenging hurdle on Monday when they swept #14 Kentucky in Lawrence. After a relatively-soft opener to their non-conference schedule, things get tougher next weekend: Purdue and Creighton come to town, along with Belmont, for the Kansas Invitational.

If the Jayhawks, who are serious contenders for the NCAA title this year, get past those two opponents, have a chance to make a deep run before they face another ranked team. After Purdue and Creighton, the Jayhawks’ next ranked opponent (and the only other top 25 team in the Big 12) is #4 Texas on October 11th – their 19th game of the season – in Lawrence. Kansas and Texas split their games last season, with each team winning at home.

That match will kick off the toughest section of Kansas’ Big 12 schedule. After Texas, they play Baylor, on October 18th and a week later have Iowa State – both on the road.

There are a few tough conference matchups on the way to that Texas game – including in-state rivals Kansas State and Iowa State – both NCAA tournament teams last year – and West Virginia, who are dangerous with dynamic sophomore Payton Caffrey.

Penn State and Minnesota are the other undefeateds that will be circlesd as NCAA title front-runners. This week in the Big Ten/Pac-12 Challenge, the Nittany Lions (5-0) face fellow undefeated Colorado (6-0) and defending NCAA Champions Stanford; a week later at the Penn State Classic they’ll see undefeated Yale (3-0) as well.

Minnesota has had a schedule loaded with Power 5 Conference teams so far, and have only dropped 1 set in those 5 matches, but their biggest win, a 3-0 opener over North Carolina, looks less-and-less impressive. UNC was ranked #14 at the time, but are now 0-4 and out of the top 25.

Number of undefeated teams after 2 weekends of play in past seasons:

The full list of teams who have finished a season undefeated, as well as teams that are still undefeated this season, are below. The list of course includes Penn State, who had back-to-back 38-0 seasons in 2008 and 2009 and won a total of 109-straight games from September 21, 2007 through September 10, 2010: