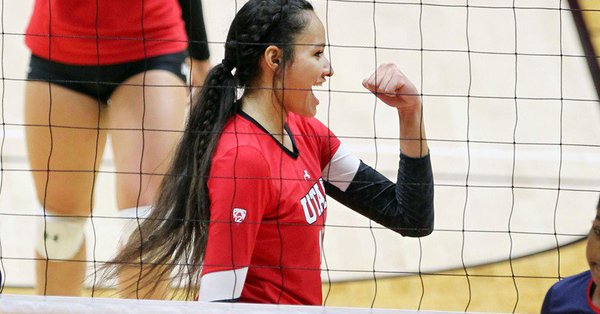 The six- match tournament brought a mixed bag of results, but Utah came away with the trophy posting a 3-0 record, all in sweeps. Current Photo via Utah Athletics

The Montana Griz welcomed Gonzaga, Iowa State (RV) and Utah to Dahlberg Arena for their first home tournament in four years. The six- match tournament brought a mixed bag of results, but Utah came away with the trophy posting a 3-0 record, all in sweeps.

The tournament title was the second of the season for the Utes who went 2-1 at home last weekend, winning the Utah Classic.

It was a special tournament on a different note as all four head coaches were women.

Females make up just one-third of all head coaches in Division I women’s volleyball, but this weekend in Missoula, all 4 teams were led by women. pic.twitter.com/ltrQS6cS5q

Utah Is Upping Its Offensive Options

Utah continued to develop its offensive weapons on Week 2. Outside hitters Dani Drews and Lauga Gauta paced the team on opening weekend, but it was Megan Yett and Phoebe Grace who stepped up in the Week 2 opening match against Montana. Yett downed 10 kills in 18 errorless swings, hitting at a .556 clip, while Grace just missed a double-double with 10 digs and nine kills, while hitting .444. (Grace had previously posted double-digit kill tallies in two of the team’s opening weekend matches).

Against Gonzaga, Gauta and Drews were back in form with 16 and 11 kills respectively, each hitting nearly .380. Gauta also pulled up a team-best 15 digs. Yett and Grace were not lost in the shuffle, however, checking in with seven and six kills alongside Berkeley Oblad (7).

Kenzie Koerber joined the part in the sweep of Iowa State, notching 10 kills and four blocks, right behind Gauta (14) and Drews (13).

The host Griz came into the week at 0-3 with hopes of getting back on track at home. After falling via sweep in the first two matches, Montana, which has gone just 27-85 over the last four years including just nine home victories, survived a five setter vs. Gonzaga to close out the weekend.

The Griz trailed 9-7 and 12-11 in the fifth and called timeout hoping to reset.

“We’ve gotten so close against so many teams, and then mentally we’ve gotten a little afraid of, ‘What if we lose again?” head coach Allison Lawrence said. “In the timeout, we really emphasized that we get to choose what we focus on. If we execute our minds, we’ve clearly shown that our bodies can do what they need to do.”

After the break, Mykaela Hammer downed kills to tie the score at 12 and then again at 13, but Montana was soon facing match point at 14-13 after a hitting error. From there, Lawrence’s talk appeared to kick in. Missy Huddleston downed her 24th kill and then added an ace to give the Griz a match-point try at 15-14 forcing a Gonzaga timeout. A hitting error leveled the score at 15-all, but Maddy Marshall finished off the comeback for Montana and sewed up the team’s first win with back-to-back putaways.

Seeing her team rally for the win was as good as the tournament title for Lawrence.

“I think I jumped as high as I have since college,” Lawrence said after the win. “I was very emotional. We had players crying, we had coaches hugging. We’re a program that has been starved for wins, and I want us to be so hungry. When that last ball falls, it’s the feeling of coming up for air and all of your emotions come pouring out.”

Piper Mauck starred as the team’s court director in the team’s first and last match of the weekend. Against Gonzaga, Mauck notched 54 assists and nine digs.

The team turned the reigns over to rookie Jenna Brandt vs. Montana and watched her dish out 37 assists and add five digs and three blocks to the team’s tallies.

Mauck was back in the saddle against Utah, posting another double-double with 21 assists and 14 digs, her third of the season. Brandt also saw action in all three sets, posting six assists and a dig.