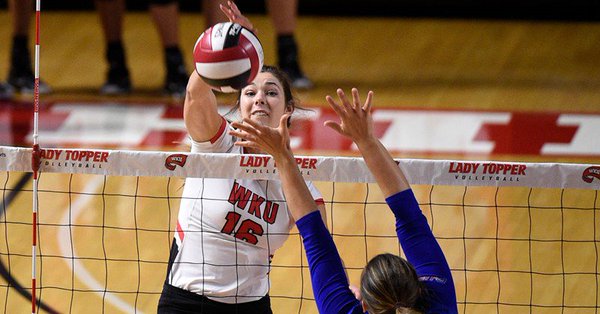 As a right side hitter for the Western Kentucky Lady Toppers Sydney Engle racked up three All-Conference USA honors and... Current Photo via WKU Athletics

As a right side hitter for the Western Kentucky Lady Toppers Sydney Engle racked up three All-Conference USA honors and five C-USA defensive player of the week nods, now the Floyds Knobs, Indiana, native is taking on a different style of defending as a goal keeper for the WKU soccer team.

According to the Bowling Green Daily News, the graduate student’s addition to the soccer team is effective immediately. Engle’s first chance to see the field would be Friday night as WKU plays host to Lipscomb. The Lady Topper roster lists two other goalkeepers, redshirt junior transfer Anne-Marie Ulliac and freshman Bailee Witt. Both keepers are listed a 5-9, while Engle brings extra height at 6-0.

Engle is taken advantage of a rule that allows players a 5th year of NCAA eligibility if they use it on a different sport than their first 4, given they meet certain other requirements (such as, are within 5 years of starting college, without a waiver). In volleyball, we most often see this play out with indoor players transferring and playing a season on the beach as a graduate student.

The addition has inspired a little spirited celebration of Engle between the soccer and volleyball teams.

She happens to own the 11th-most block assists in WKU Volleyball history. ⛔⛔

You should also know, she's very reliable – playing in every match during her time with us & ranks in our top-10 in both sets and matches played! ✅✅✅ pic.twitter.com/tsOwXjY56U

Sounds like we can count on her! We can't wait to have her on the squad, she'll be an awesome fit!@Sydneyengle16, welcome to the team! 👋 #GoTops pic.twitter.com/J69NCAy15j

Engle supplied a little bit of everything during her four-year career on the hardwood, notching 925 kills, 835 digs, 272 blocks and 80 aces. She ranks 10th in career sets (485) and matches played (140) after helping WKU to four C-USA Tournament titles and a share of the regular season crown all four years as well.