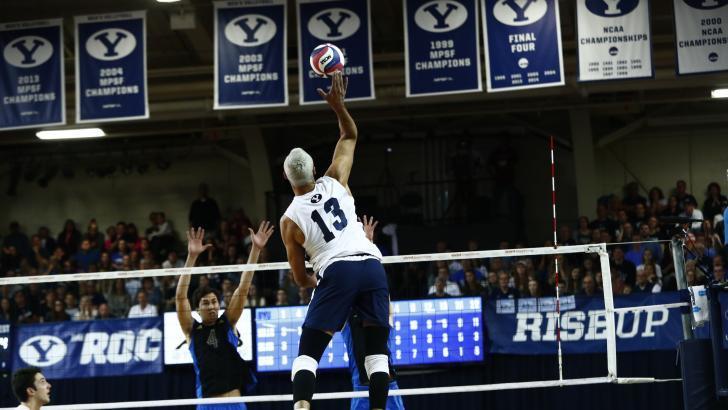 The 2nd-ranked UCLA Bruins entered this weekend’s double-header against BYU with only 1 loss all season and a perfect 6-0 record in MPSF play. They’ll come out the other side having been swept by the 4th-ranked Cougars, who now sit 2nd in the MPSF standings – just 1 game in the wins column behind Long Beach St.

By sweeping the Bruins, BYU has given themselves a big feather in their cap in the event that they don’t win the MPSF tournament. The NCAA National Championship tournament invites 6 teams: 4 of whom are conference champions, and the other 2 of whom are at-large nominees.

After winning in front of a crowd of 4,000 on Friday, BYU’s fans turned out to the tune of 4,582 on Saturday to see the sweep. UCLA, conversely, was without starters Jake Arnitz and Mitch Stahl, who sat out both games  on the weekend with injuries.

UCLA started off sluggishly, getting just 5 kills as compared to 9 errors in the first set. UCLA actually got their first 5 points of the game from kills, but after falling behind 11-5, they didn’t score a single offensive point in the rest of the set.

In the 2nd, the Bruins played  better offensively, including 5 kills from JT Hatch and 2 aces from Micah Ma’a, but still came up short 25-23. Ma’a had 8 aces over the two game set, but hit -.117 over the same stretch.

In the 3rd set, the two teams traded points all afternoon long, but with UCLA on a set point, BYU took 3 straight to finish the game.

UCLA was led offensively by Hagen Smith, who had 10 kills on a .438 hitting percentage. The Bruins have leaned on him heavily in the last week of play to pick up the slack for Arnitz and Stahl. In the team’s last 3 games, he’s recorded his 3 highest attack totals (13, 23, 16) of the season.

“We played a much better, complete match tonight,” BYU head coach Shawn Olmstead said. “One of our points for this game was to be more calm, for the guys to be a little more level-headed. At the start, being up big, you need to be a lot more level-headed, and I was impressed with the guys. I thought we did that. We made the smart plays and didn’t try to over-do it, so it was more of a complete match, and we just got better.”

The Cougars (9-2, 4-1 Mountain Pacific Sports Federation) finished with a .420 clip in comparison to the Bruins’ (9-3, 6-2 MPSF) .198 hitting percentage. Patch finished with a game-high 13 kills and was followed closely by Langlois’ 11. Leo Durkin had a match-high 28 assists and Wil Stanley came off the bench for the Cougars to log 10 assists after his teammate. On defense, Langlois also claimed a team-high five digs. Price Jarman and Joseph Grosh led both teams with three blocks apiece.

The Cougars opened up set one with four-straight points, forcing UCLA into an early timeout. Jarman slammed it home for another Cougar point to put them up 5-1, and BYU continued its dominant performance over the Bruins. Grosh, Patch and Langlois all took a turn recording kills, and BYU found itself up 11-4 after a UCLA service error. A monster block from Jarman extended the lead to eight, 14-6. The rout continued with help from another Grosh kill, several Bruin attack errors and a Brenden Sander service ace. The Cougars led 22-9 to record the set-high lead of 13, and when set point arrived with BYU up 24-12, a service error from the Bruins gave the Cougars the victory in set one, 25-13.

The Cougars took the first two points of the second set helped by a UCLA service error and a Langlois service ace. The lead was lengthened to three, 5-2, off an Erik Sikes dig and Sander kill. The Bruins kept the set much closer than the first, but BYU maintained an edge over UCLA with more Bruin errors and one monster kill from Jarman. UCLA called the first timeout of the set with the Cougars up 11-6, then the two teams traded points until BYU found two straight, approaching set point with the lead, 21-15. Up only four, 21-17, BYU dropped the next four points, and UCLA tied the set at 21. A Patch kill, a deflected Cougar serve and a UCLA service error all combined to finally give BYU the victory in the second set, 25-23.

UCLA jumped out to a quick 4-2 lead in the third set and would maintain at least a two-point edge over BYU until it reached four at 11-7. Despite Patch, Langlois and Kiril Meretev kills, and a Bruin service error, the Cougars were not able to chip away at the Bruin lead and regrouped by calling a timeout at 18-14. Two-straight Cougar points and a UCLA service error gave BYU some momentum at 21-18, and BYU would continue to pressure the Bruins and the lead. The Cougars got within one, at 23-22, and then a huge Jarman kill tied it up at 23. The match would see more ties at points 24 through 29, with each team trading set points. When BYU took the 30-29 lead, Tim Dobbert, who had recently entered the match, served up a ball that was hit back by the Bruins into towering Langlois and Jarman for their third block each, and the Cougars took the final set and the match in a sweep, 31-29.

In set two, it was more of the same from the Cougars as they established leads of 6-11 and 10-16. Eric Sprague came off the bench to spark the Bruins with a kill to close to within 15-19. A JT Hatch swing made it 16-21 and Smith followed with a kill for a 17-21 score. Micah Ma’a then served the Bruins to four straight points, two coming on service aces, and UCLA pulled even at 21-all on a kill by Michael Fisher. The score was tied at 22 on a kill by Daenan Gyimah. BYU tallied the next two points before their service error made it 23-24. However, the Bruins returned the favor and the bad serve gave BYU the set at 23-25. UCLA hit .367 for the set, but made 7 service errors.

The Bruins came out strong in set three and enjoyed leads of 8-5 and 11-7. A Sprague kill made it 14-11. A series of errors left the Bruins with a 19-14 edge. BYU slowly climbed back into the set and closed to 22-20. A Cougar service error lifted UCLA into a 23-20 lead, but the home squad answered with three straight points. A Gyimah kill gave UCLA the first of what would be five set points down the stretch. Two kills by Hatch and one by Sprague left UCLA with set point opportunities on which they could not cash in at 26-25, 28-27 and 29-28. BYU ended the match on a block for a 29-31 win. The Bruins hit .323 for the set.

Fisher finished with seven kills and hit .385. Sprague, in his first action of the season, added five kills (.375). Jackson Bantle and Ma’a totaled five digs each.  UCLA played without starters Jake Arnitz and Mitch Stahl who each sat out the match due to injury for the second straight night.