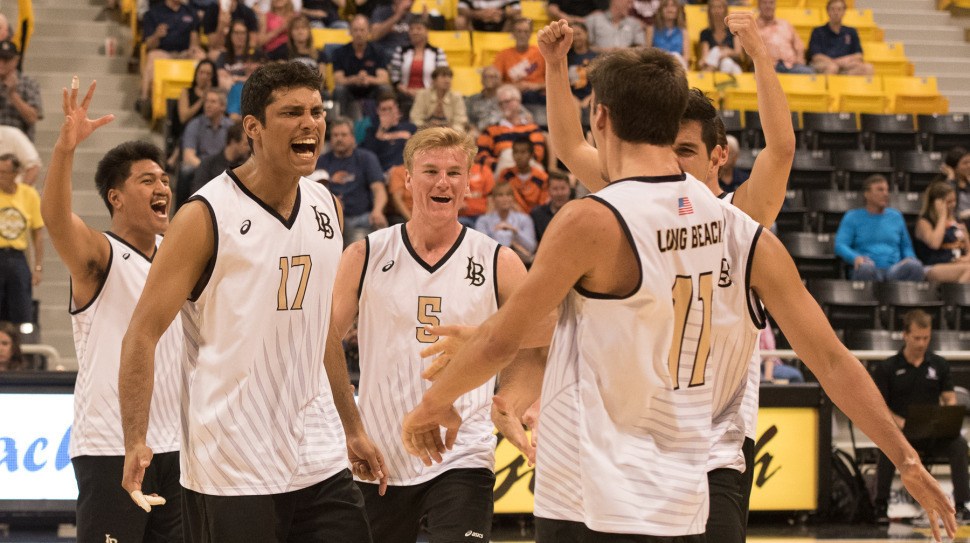 On the heels of an NCAA Championship appearance, the 2017 Long Beach State men’s volleyball team is gearing up for another exciting season which is filled with anticipation as the fourth-ranked Beach return to the court in search of their second NCAA title in program history.

Long Beach State opens the 2017 season Friday, Jan. 5 at the UC Santa Barbara Tournament where the Beach will go up against Fort Wayne, McKendree and Quincy on Friday and Saturday.

Head coach Alan Knipe will be back on the bench for his 14th season at the helm of the LBSU men’s volleyball program and will be returning 18 letterwinners, including five starters and All-American libero Andrew Sato. Additionally, the Beach brings in a strong recruiting class which is comprised of four transfers who will provide a lot of depth and experience.

Knipe, a former U.S. Men’s National Team coach, boasts a career record of 251-142 (.639) and has led the Beach to four straight MPSF Tournaments and, most recently, their eighth Final Four appearance in the history of the program.

“As a team, we are getting better in all facets of the game; including volleyball skill sets, volleyball IQ, and the team’s physical conditioning,” Knipe said. “If we can combine those and play with relentless effort, the expectations will take care of themselves at the end of the season.

“We have some maturity from last year’s young freshman group with a lot of good returners coming back. I think our team is doing a really good job of assuming the leadership role as a group. Our goal is to become the best team we are capable of being in 2017.”

With all but one starter back on the court and a lot of depth coming off the bench, the Beach looks to be a contender in 2017 yet again.

Outside Hitters
Long Beach State returns 2016 AVCA Newcomer of the Year and First Team All-American, TJ DeFalco who finished the year ranked second in the MPSF and sixth in the nation with 4.32 kills per set. The 6-foot-4 sophomore out of Huntington Beach, Calif., totaled 510 kills marking the most by an LBSU freshman since 1990 and went on to be named MPSF Freshman of the Year. The team’s leader in digs (238) and aces (40) was also selected to the All-MPSF First Team and All-Freshman Team, before being named Off the Block Freshman All-American.

In addition to DeFalco, the Beach also has senior Andrew Whitt, junior Bjarne Huus and sophomore Louis Richard who provide depth on the outside.

Whitt redshirted last year, but played in 16 matches with five starts in 2015 and averaged 1.61 kills, 1.10 digs and 0.49 blocks per set. Huus, a native of Foerde, Norway, started in 18 of 28 matches a year ago and averaged 1.26 kills and 1.24 digs per set. Richard, like Whitt, redshirted in 2016, but had a solid freshman campaign in which he played in 14 matches and was used primarily as a serving specialist.

“We have good depth in the outside hitter position,” Knipe explained. “We return TJ DeFalco who is the AVCA Newcomer of the Year and First Team All-American. Andrew Whitt, Bjarne Huus and Louis Richard are the key guys who are back. We know there is also the opportunity to have Kyle Ensing play on the left or the right side.”

Middle Blockers
After losing All-American Taylor Gregory to graduation last year, the Beach will utilize their veteran returners Amir Lugo-Rodriguez and Bryce Yould who both saw substantial playing time in 2016.

In addition to Lugo-Rodriguez and Yould, the Beach have juniors Zach Gates and Jason Willahan, along with junior transfer Nick Amado who comes to LBSU from Orange Coast College.

“What I like about our pool of middles is there are different skill sets that they all excel at,” Knipe stated. “We have some good size in a couple of the guys; we have some real good athleticism and fast arms.

“Traditionally, they are classified as ‘offensive sideout middles,’ but we also have some guys who have the ability to be defensive at the same time and can be a big force at the net blocking. Overall, I think it’s a really good group.”

Opposites
All-MPSF Second Team selection Kyle Ensing will be back on the court for his sophomore season after being named to the 2016 MPSF All-Freshman Team as well as garnering Off the Block Freshman All-American accolades. Ensing started in all 32 matches for the Beach as a true freshman and was second on the squad with 354 kills (3.08 per set) and 229 digs (1.99 per set). He also added 23 aces and 79 blocks.

“As far as opposite go, Kyle Ensing was our starting opposite last year,” Knipe said. “He’s been playing both left and right. We also have Davis Cannon who had a really good fall. He’s a big physical, left-handed opposite who does a lot of good things over there.

“Jeff Uptopo and Scott Stephanoff are also right side guys who got a lot of playing time in our fall season. Both of them had some really good moments throughout the fall.”

Liberos
The Beach boasts AVCA All-American and two-time All-MPSF Honorable Mention selection Andrew Sato at libero. The Calabasas, Calif., native enters his senior season ranked seventh in school history with 725 career digs after finishing third on the team a year ago with 225 to average 1.91 digs per set. He led all of LBSU’s primary passers with a .964 serve-receive percentage and committed just 23 errors on 646 attempts.

“We are fortunate enough to have an All-American libero returning in Andrew Sato,” Knipe said. “He’s arguably one of the best liberos in the country, and he stabilizes our serve-receive and just has a real calming effect on our entire team.

“We have a couple other real good liberos right behind him in Matt Butler, Jordan Molina and Ryan Manoogian. All three are capable of playing libero at the Division I level, so we feel fortunate to have such depth at this position.”

Setters
Long Beach State has two talented and experienced setters competing for the starting spot once again. AVCA and Off the Block All-American selections Josh Tuanigawon the role as setter a year ago in his rookie season and went on to lead the MPSF and rank third in the nation with 11.18 assists per set. He also added 163 digs, 48 blocks and 22 aces.

Battling with Tuaniga for playing time is senior Curtis Stallings who was the primary setter in 2015 in which he ranked sixth in the MPSF with 9.11 assists per set, while averaging 1.61 digs and 0.76 blocks per set. Last season, he appeared in five matches and averaged 4.00 assists per set.

“At our setter spot, we have Curtis Stallings who started for us his sophomore year and was the back up to Josh,” Knipe explained. “And we have Josh who was a Second Team All-American as a freshman. So we feel like now we have two guys battling for our setter spot, but both of them have set entire seasons as our starter and that is really good for us – not just on the court, but in practice too.”

Schedule
The fourth-ranked Long Beach State men’s volleyball team has another competitive schedule on tap as the Beach hosts 15 home matches, including the LBSU Asics Tournament, and 13 road matches against some of the top teams in the nation.

“Our schedule has a great balance of competitive conference and non-conference matches,” Knipe said. “We play some really good matches on the road in some tough environments and we’ll be hosting our annual tournament which will bring in some of the nation’s best teams.”

Following a pair of season-opening exhibition matches against Manitoba on Jan. 4 and 5, the Beach opens the season on the road at the UC Santa Barbara Tournament on Friday, Jan. 6. LBSU opens MPSF action on Wednesday, Jan. 11 at USC, before hosting its first home match of the year on Wednesday, Jan. 18 versus Hawaii.

“The goal of our schedule is to make sure we schedule across the country and get a good balance of conference and non-conference teams to enhance our overall RPI,” Knipe explained.

The challenging schedule pits the Beach against 12 of 15 nationally-ranked teams as Long Beach State looks to continue its quest back to the NCAA Championships.