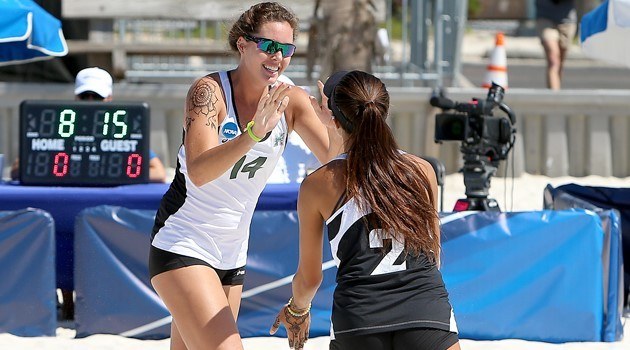 The top-ranked USC Trojans remained perfect on Sunday, moving to 16-0 on the season after two more top-15 wins to... Current

The top-ranked USC Trojans remained perfect on Sunday, moving to 16-0 on the season after two more top-15 wins to finish the Gamecock Classic in South Carolina. USC has now won 46-straight dual victories.

#4 Florida State also wrapped up play at the Gamecock Challenge with a 2-0 Sunday, beating the same two teams as USC. Both Seminoles losses came at the bottom end of their lineup.

Georgia State beat South Carolina 3-2 in a tie-breaker of sorts: the teams received the same number of votes in last week’s AVCA coaches poll and were the co-#9 teams in the country.

Meanwhile, with the Trojans out west, Irvine College hosted a one-day invite in southern California with Stanford, Hawaii, and TCU all in town for a round-robin. Hawaii came out the victors with a 3-0 record, including a 4-1 win over TCU and sweeps over Stanford and Irvine Valley. Hawaii senior Nikki Taylor, who has also been a star for the Wahine indoor team, surpassed Katie Spieler as the program’s all-time leader in dual match wins on Sunday. She went 2-1 with partner Ka’iwi Schucht at the 2 line on Sunday (they were the lone loss to TCU) to land at 61 career victories.

As for Stanford, they wrapped up their first road trip of the season 3-2 with losses to both TCU and Hawaii. While the day was lost for the Cardinal, there was a positive sign at the 1-line where freshmen Jenna Gray and Kathryn Plummer were the only winners against TCU. They also pushed Hawaii’s top pair, Morgan Martin and Mikayla Tucker, to the brink in a 2-0 loss, going 21-19, 21-19 in each set.